2020 will be a big year for cannabis stocks. In fact, one of our best marijuana penny stocks to buy could earn you 375% in the next 12 months.

This is going to be a huge industry, and it's just getting started. The legal cannabis market in 2018 was $10.8 billion. But the National Institute for Cannabis Investors estimates the industry will hit $2.6 trillion in annual sales over the next nine years. 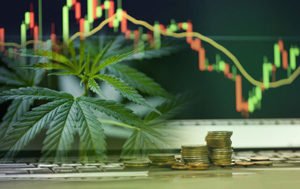 The tides are shifting in the United States right now. As many as nine states could have ballot measures legalizing either medical or recreational marijuana come election season in November. And we're going to watch cannabis stock moves all year as state governments, celebrities, and politicians give their endorsements.

For the first time in history, marijuana has become a central topic in presidential debates. Six of the eight top Democratic primary candidates are in favor of legalizing marijuana - criticizing opponents Joe Biden and Michael Bloomberg for their position to "let the states decide."

But this is more than political; it's cultural. Especially on the medicinal side, professional athletes far and wide have voiced their support for CBD. It's a non-psychoactive hemp product, which athletes have favored for pain relief and performance. These include skateboarder Ryan Sheckler, golfer Bubba Watson, former NBA All-Star Paul Pierce, and former NFL All-Pro Rob Gronkowski.

If none of that hits home, even the Girl Scouts are in on marijuana's growing popularity. On Feb. 9, a Girl Scout troop was seen selling cookies outside of a dispensary in Chicago.

This could all push the federal government to eventually legalize cannabis nationwide. And it's a big reason our top cannabis penny stock today is poised for 375% growth.

Here's why you should look into penny stocks, specifically, during this time.

Why Invest in Marijuana Penny Stocks?

Because penny stocks trade for under $5 per share, they tend to make bigger moves in response to market events.

Of course, that can make investing in penny stocks a bit risky if you don't know how they'll react in a certain situation.

But with changing policy and cultural attitudes toward cannabis, marijuana penny stocks are almost certain to soar this year.

And this cannabis penny stock will pop the most as a result.

What is the minimum amount one can deposit in a cannabis stock?

Excellent question, the minimum amount you can invest in any given stock would be the value of a single share.

And penny stocks, by definition, are priced at under $5 per share. So you should be able to buy any given cannabis penny stock for less than $5.

For additional assistance, feel free to reach out to a customer service representative at 1-888-384-8339.