As Apple stock tumbled yesterday (Monday) along with the rest of the market, it was just a taste of the economic bite the still-spreading COVID-19 coronavirus will take out of the global economy. 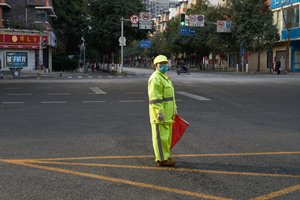 In Apple's case, it's something of a delayed reaction. The company warned one week ago (on Feb. 17) that the coronavirus would reduce its earnings for the current quarter.

For weeks, the market "experts" have insisted that any impact on corporate earnings and the world economy would be minimal and brief. This despite a steady stream of reports that suggested the situation was far worse than the Chinese government was admitting.

Wall Street's wake-up call finally came over the weekend as the coronavirus reached places like Italy, South Korea, and Iran - and new cases multiplied despite efforts to contain the disease.

It's time for investors to take a hard look at just how much of an impact the coronavirus will have on the global economy in 2020 - and what that will mean for stocks. Even if other nations are able to mostly contain the disease, what's happened in China so far guarantees a severe disruption to global supply chains.

And Apple is Exhibit A.

Why Apple Stock Is Getting Slammed Especially Hard

Apple is the prototype of a global corporate giant that does business all over the world but has a supply chain highly dependent on China. That makes it particularly vulnerable to any sort of disruption to business as usual in China.

What we have here is an unusually far-reaching disruption. No one knows how long it will last.

A major complication resulted from the timing of the outbreak. When it struck, hundreds of millions of Chinese workers were hundreds of miles from home celebrating the Lunar New Year. Widespread travel restrictions mean most are stuck where they are, unable to return to work.

Nearly half of that nation's population - 780 million people - have had some type of travel restrictions imposed on them. Several cities in the Hubei province, ground zero of the outbreak, are virtually sealed off, its residents holed up in their homes.

Factories that normally have thousands of workers on the job are struggling to do what they can with skeleton crews of a few dozens.

"If this [outbreak] drags past March, that really becomes quite bad," Tom Rafferty, China research head at The Economist Intelligence Unit, told NPR. "Then you're talking about long-term dislocation in supply chains. You're talking about a negative impact on the consumer sector, which is not temporary."

This is why Apple, and an increasing number of other companies with supply chains tied to China, are issuing warnings.

According to the South China Morning Post, only about a quarter of the migrant workers across 15 sample cities had returned to their jobs as of Feb. 19.

The situation varies according to region. In Hubei, the epicenter of the outbreak, many factories are shut down completely. Others are open but operating at less than half their usual capacity.

And once the workers do get back, it will take weeks for production and complex supply chains to get back to normal. Right now, no one knows when that will happen.

We're talking about a massive and extended disruption to Chinese production. It's already lasted long enough to affect the availability of many products in the United States by April. That includes not just Apple's iPhones, iPads, and Watches, but consumer goods ranging from small appliances to Barbie dolls to shoes.

If the coronavirus continues to spread in other nations, their economies will be affected as well.

An additional risk is that even in the best-case scenario - in which the disease is contained relatively soon - the strain on the global economy could be enough to tip it into a recession. That will certainly be the case if the outbreak is still spreading in April.

The truth is no one knows just the extent of the damage the coronavirus will have on the economy.

But data analytics firm Dun & Bradstreet estimates 5 million companies could be affected worldwide. And Oxford Economics has warned that the outbreak will shave 1.3% off global growth this year, or $1.1 trillion in lost income.

And some U.S. industries are feeling the effects already...

Who's Losing Money Due to the Coronavirus