No matter on which side of the political aisle you sit, election years are a great opportunity for investors. 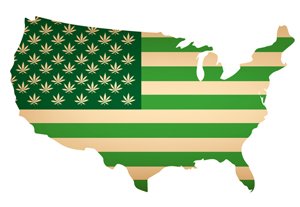 In the current election cycle, Sen. Bernie Sanders (D-VT) has, for now, jumped into the lead on the Democratic side. Aside from political enemies, many people, including business executives, think that a Sanders presidency would change the economy.

It's no wonder investors are concerned about his chances of winning the White House.

Senator Sanders has railed against big banks and unfair taxes. And his "Medicare for All" plan will change the face of the health insurance industry, if one is even left standing. Indeed, we think markets will react negatively to Bernie, but we also expect he will be constrained by Congress on some of his most ambitious plans.

There's cause for concern, but it's certainly not a time to panic.

Why Bernie Sanders' Marijuana Legalization Plan Is Great News for You

We here at Money Morning are not concerned with who is in the White House. Our only mission is to help readers make money no matter the political, economic, or social landscape.

Whatever the reality, we want to have a plan to exploit it.

Even if a President Sanders cannot just dictate marijuana laws, he will wield a lot of influence on how the federal government handles marijuana regulations.

And that could be a massive catalyst for marijuana stocks.

If you visit the marijuana page on his website, the first words you will see are "We will legalize marijuana and vacate and expunge past marijuana convictions." His stance is quite clear. In fact, he states that he will take executive action to legalize marijuana by removing it from the Controlled Substance Act within the first 100 days of his administration.

Right now, weed has already been legalized by 33 states for medical use, and 11 of those states have made it legal for recreational use, too. A Gallup poll shows that two-thirds of Americans are for full legalization. But the federal government still classifies marijuana as an illegal drug, and that's keeping a lid on the entire industry.

From which stocks can list on exchanges to whether banks will lend money to cannabis firms, federal prohibition is a drag on the industry.

But full legalization will unleash the animal spirits of the markets.

It will create huge tax revenue, which will make politicians happy enough to want more weed development. It will create billions in wealth for cannabis growers, purveyors, processors, distributors, and retailers, bringing the industry out of the shadows and into the mainstream.

And it will unleash research dollars to create new products and medicines. Medical schools will finally be able to train young doctors to effectively prescribe cannabis for all sorts of needs.

Existing cannabis companies would also see additional benefits from the streamlining of operations. Right now, they must have duplicate operations in every state they serve because they can't transport products across state lines. Reduced costs go right to the bottom line, and that could provide a windfall for shareholders.

The more momentum the Sanders campaign gets, the more his Democratic rivals will have to follow his lead. We could even see President Trump offer a similar plan as a way to cut off some of Bernie's support when the general election gets near.

Make no mistake: This is a huge opportunity.

And we're here to help you make the most of it…

You Could See Gains of up to 1,000% with the Three Hottest Trends in Cannabis