Oil prices were already down 50% year to date on Friday. They plunged another 25% yesterday. 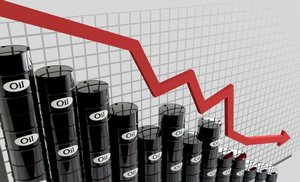 Fears of the COVID-19 coronavirus spreading means that more people are staying home.

And as fewer people travel, there's less demand for oil - which causes the price to fall.

One way the leading oil-producing countries fight falling demand is by slowing production.

If they're able to decrease the supply of oil as much as the demand for it, the price should stabilize.

That's exactly why OPEC and Russia met last week. They planned to make the biggest oil production cut since 2008.

Unfortunately, the two sides couldn't come to an agreement.

Russia, the world's third largest oil producer, did not want to limit its oil output, because any meaningful cut would severely hurt the country's bottom line. After all, oil exports account for approximately 30% of Russia's GDP.

So over the weekend, Saudi Arabia - the world's second largest oil producer - officially launched an "oil price war" when it announced it would aggressively cut the price at which it sells its crude oil by the most in 20 years.

The price of crude oil immediately dipped 31% - the biggest percentage loss since 1991.

The country's plan is to keep oil prices lower for longer in order to put its Russian counterparts out of business.

But Saudi Arabia's actions have more consequences than hurting its Russian counterparts.

When the price of oil drops this much this quickly, it has global ramifications.

In fact, our latest oil price prediction could turn the industry on its head.

And it will create two moneymaking opportunities for you...