Universa is a hedge fund run by Mark Spitznagel, and it's having a tremendous year so far.

Mr. Spitznagel was mentored by Nassim Taleb, the author of the book "Fooled by Randomness and The Black Swan: The Impact of the Highly Improbable."

The fund makes small bets on huge moves in the financial markets. It's rumored to be up more than 1,000% in the last few weeks. The strategy is to find options that are way out of the money, which are very cheap. And if a "Black Swan Event" happens, those options become very expensive as volatility increases.

Take Action: Market volatility has everyone on edge, but we have three steps you can take to protect your money and even set yourself up to profit. Click here…

During the past several months, we have thrown out a couple Black Swan trading ideas to subscribers.

And they have paid off handsomely this week.

The idea of buying low-priced options on events conventional wisdom says will not happen may seem like a crazy idea. But the fact is that if you get the payout and probability math correct, it can be a source of wild profits.

Most of the events will never happen, and you will lose money on the options you purchase.

Those that do work, however, will make you an enormous amount of money. 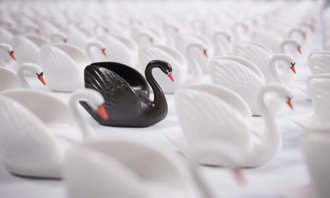 But here's the thing. The market does not even have to reach your strike price to win. You just need violent moves in the market to make volatility increase a substantial amount.

Volatility is a significant factor in option pricing, so higher volatility means higher prices regardless of whether the option is in or out of the money.

Several of them have worked out pretty well.

Last spring, I suggested that Micron Technologies – then in the mid-$20s as everyone talked of the glut of semiconductors – would go back to new highs. My thinking was that increased technology in everything from quantum computers to refrigerators would soak up supply and the stock would go back to new highs. Prices did go back up above $50, and those who bought a small position in cheap calls profited.

A month later, I suggested that Ceasers Palace would be bought out and traders should buy long-dated calls.

Of course, some of them have not worked.

I suggested buying long-term calls on Encana when no one thought natural gas prices would rise. A small bet that prices would spike would be wildly profitable. They didn't, and the options fell sharply.

Recently, I suggested that given the air of complacency in the stock market, a stiff sell-off in stock prices would qualify as one of these trades.

We're Cashing In on This Black Swan Trade