A black swan event is a rare occurrence that could not be predicted and has a catastrophic impact.

Right now, you're probably seeing the term in a lot of headlines that mention the coronavirus outbreak and its role in the current stock market crash. 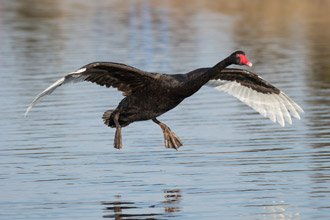 It's easy to see why the media would draw upon this shorthand.

Concern about the rapid spread of the coronavirus and what it will do to the global economy put a stake through Wall Street's 11-year bull market – and did it in the brief span of four weeks.

The term "black swan" to describe such events is fairly recent. Economist Nassim Nicholas Taleb coined the term in 2001.

Certainly, no one was prepared for how dramatically COVID-19 would change human behavior, first in the Wuhan area of China, where it started, and more recently in parts of Europe and the United States.

As more people stay home and spend less money, businesses suffer and profits drop. And the longer the crisis goes on, the greater the odds of a recession.

The huge one-day losses amid extreme volatility in the markets over the past month – the S&P 500 has fallen as much as 29% from its Feb. 19 peak – is typical for a black swan event. A global event of this severity was definitely not on Wall Street's radar in January.

Some sticklers have claimed that the coronavirus crisis is not a true black swan event because the likelihood of a global pandemic had been predicted by some health experts. Instead, they say this is a "grey rhino" event. That describes a highly probable but nevertheless ignored threat that has a big impact.

The spread of COVID-19 may well be a grey rhino, but most people will keep calling it a black swan.

To get an idea of what the coronavirus crisis will mean for investors going forward, we need to look at the long-term impact of a black swan event from the past…

What the World War II Black Swan Event Tells Us

One black swan event from the past that is particularly useful in shedding light on the reaction to the coronavirus crisis is the World War II bear market. Not only was the outbreak of war a shock to many, but the widespread impact and ongoing uncertainty from the war in many ways parallels the coronavirus crisis.

While tensions had been running high in Europe, many believed that Nazi Germany would be content with the annexation of Austria and the Czech territory of Sudetenland.

So the German invasion of Poland in September 1939 came as a surprise. But at first, traders thought the war would not affect the United States and could even be a profit opportunity for American business.

Likewise, U.S. stocks kept rumbling higher even as the news out of China grew ever more troubling. The Dow Jones Industrial Average hit an all-time high of 29,568.57 on Feb. 12 after several weeks of ominous reports.

Two weeks after the invasion of Poland, the Dow peaked at 155 points.

Then, in May 1940, Germany invaded the Low Countries and France. Just as when cases of the coronavirus began showing up in Europe and America, the war suddenly seemed much more threatening. In eight days, the Dow plunged 23%.

The markets bounced around for the next year or so until the Japanese attack on Pearl Harbor. That attack, and the weeks of Allied losses in the Pacific that followed, made Wall Street realize just how grim the situation was. The Dow hit a bottom of 92 in April 1942 – a drop of 40.6% from its level at the war's start.

But it's not all gloom. The markets reversed course in mid-1942 – three full years before the end of the war. The trigger was the encouraging news of the Doolittle Raid on Tokyo in April. In the months that followed, the Allies had a string of major victories (Midway, El Alamein, Stalingrad) that kept pushing stocks higher.

That suggests today's markets won't stay in a funk for as long as we're fighting the coronavirus. As soon as we start getting good news (approval of a vaccine, a steady decline in the rate of new cases), stocks will rebound.

In the meantime, we're stuck with the fear and uncertainty. Here's what investors can do while waiting for better days…

An Investing Strategy for a Coronavirus Market