There certainly is plenty to worry about these days, but if you listen to the media and many so-called experts, you would think that the sky is literally falling.

Make no mistake, there is real risk here, but don't let the news make you panic. For investors, the term "bear market" has been liberally applied to what's going on. In order to ease your fears, let's define what a bear market really is and what makes it different from a stock market correction. 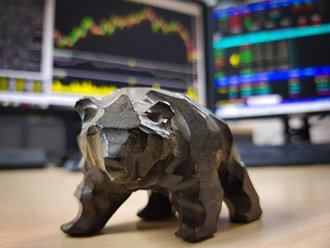 First, a bear market is a 20% drop in markets from recent highs, while a market correction is a 10% fall. But once you dig in deeper, things get more complicated.

You see, the conventional definition of a bear market, meaning a drop of 20% or more in the market, is misleading. By the time that happens, the "bear market" is already nearing its end. The phrase "bear market territory" is as useless as it gets. Was it not a bear market when stocks were down 19.9%?

A real bear market is a different kind of market altogether, and it differs from a market correction in more ways than the percentage decline. Most of the time, a real bear market is a steady, grinding decline that wears investors down. It has false recoveries and worsening economic and fundamental statistics.

Typical bear markets last, on average, about 14 months. They drain investor enthusiasm to the point where they throw in the towel and stop even looking for a bottom. Trading volume starts to dry up, and volatility contracts.

Don't Wait: Get Our Complete Guide to Surviving the Coronavirus Crash Right Here

Even the Crash of 1987, with its 22% single-day drop, took seven months before the volatility calmed and a rising trend reemerged. It took 19 months before the Dow Jones Industrial Average regained what it lost during the Black Monday collapse.

And a bear market usually doesn't just happen overnight. There are always warning signs as the bears chip away at the foundations of the market bit by bit.

There were warning signs ahead of the 1987 crash too. In fact, the market had been sliding lower for two months before it happened, while interest rates were soaring.

Corrections tend to be event-driven. Oftentimes, the market was showing some signs of age in breadth or crazy high valuations or even just an unsupported price "melt up." The pullback can be sharp, but it doesn't last so long.

That's why what's happening now is unique. We've met the technical definition of a bear market, but it's acting more like a market correction.

And that has serious implications for how to play it...

Why the 2020 Bear Market Is Different

We're not saying "this time it's different," but rather that the speed and depth of the current decline, no matter what we call it, is unprecedented. This is the fastest we've gone from market highs to a bear market ever.

Plus, the market was healthy before the decline. Before the Feb. 19 peak in the S&P 500, most technical indicators were looking rather solid. From breadth to momentum to price trend, the 11-year bull market was still chugging along.

Then came the perfect storm from outside the market. The coronavirus started spreading outside of China, Russia and China essentially blew up the oil market with their price war, and then piece by piece, the public and private sectors started shutting down the economy. Fear was daily fare in the media, and before we knew it, the markets were rocked by selling, volatility, and lack of confidence.

How the market moves and will likely move are not what makes this year different. It was just that the market was hit with so much at once that Wall Street couldn't cope.

That's why we're not worried about the label. Call it a bear market or call it a correction. And don't worry about what you should've done a month ago. We are here, and this is now.

Here's what you can do right now based on how this is playing out...

Here's When to Buy During a Bear Market