Is Bitcoin a buy now, or is it too risky to bother with in this era of coronavirus-driven uncertainty?

That's the question many crypto investors are asking themselves in the wake of Bitcoin's ugly meltdown a few weeks ago. The Bitcoin price plunged as much as 51% in just two days. 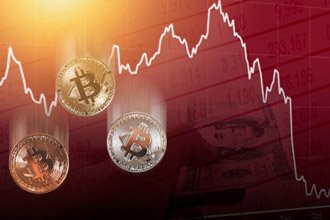 For diehard Bitcoin enthusiasts, any big pullback is typically considered a buying opportunity. But this drop coincided with a crash in the prices of conventional assets - theoretically the very justification for owning crypto in the first place.

"Surprised we're seeing the Bitcoin price fall in this environment, would have expected the opposite," tweeted Brian Armstrong, CEO of the Coinbase crypto exchange.

But while crypto critics gloated and some Bitcoin owners no doubt had their faith tested, BTC's sudden price drop isn't as damning as it looks.

People weren't selling Bitcoin because they suddenly lost confidence in the asset. The reason had much more to do with the coronavirus-induced panic selling of other assets, particularly stocks...

The explanation as to how a stock market crash could trigger a crash in the price of Bitcoin can be summed up in two words: leverage and liquidity.

It's no secret that many investors - especially large investors - use leverage to multiply their gains in a rising market. Simply put, they're borrowing money "on margin" to buy many times more shares of stock than they could pay for in cash.

You see, brokers require investors to maintain a minimum value in their margin account. When stock prices fall quickly and steeply, it can rapidly put an account below its minimum value.

At that point, the broker makes a "margin call" to the investor demanding additional money or securities. If the investor lacks the cash to do this, brokers can compel the investor to sell other assets regardless of price to bring the account back up to the minimum value.

This "liquidity crunch" will send an investor looking to sell other assets to raise the needed cash. Those assets often include things otherwise considered safe havens, such as gold - and Bitcoin.

"A liquidity event in equities will likely translate into worsening liquidity conditions in crypto because market participants will be forced to adjust their portfolios and deal with margin calls, alternative assets are unlikely to be prioritized," Denis Vinokourov, head of research for London-based digital asset firm Bequant, told Forbes. "The same goes for commodities such as oil and gold."

When you look at how both gold and Bitcoin behaved at the peak of the sell-off, it becomes clearer that this episode is more of a hiccup than an indictment of BTC as an investment.

Bitcoin and Gold Are More Alike Than Different

From the time stocks started plunging dramatically March 9, gold fell about 15% while Bitcoin dropped about 50%.

That's quite a difference, but gold has the benefit of earning investors' trust over thousands of years. Bitcoin, at just a little over 10 years old, has not had time to prove itself and is often volatile.

Traders that have been investing in Bitcoin for the past few years see it as an alternative asset that carries much more risk than gold. So in a liquidity crisis it makes sense that Bitcoin would take a much bigger hit than gold.

Still, it's telling that an acknowledged safe haven like gold fell as much as it did when the equity markets were under stress.

What's also interesting is how both assets bounced back. From that March 9 starting point, gold has recovered more than half its losses but is still down 6.5%.

Bitcoin has also recovered more than half its losses taken since that day, and it remains down about 20%.

This chart of both assets shows how similarly they behaved: 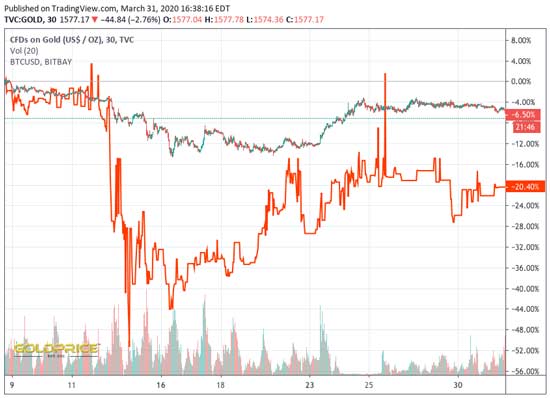 This episode provides some useful lessons. It tells us Bitcoin does behave as a safe haven, just not to the degree gold does. And it tells us we could see a repeat of this pattern the next time stocks suddenly take a major nosedive.

It doesn't change the powerful investment case for Bitcoin.

In fact, the devastating impact the coronavirus is having on the economy is making the argument for owning Bitcoin even stronger...

Why You Should Buy Bitcoin During the Coronavirus Crisis