Because of the sudden shock to economy due to the coronavirus pandemic, the current earnings per share (EPS) estimates are dangerously out of date.

Investors rely on analyst EPS estimates to help them determine whether a company's profits are expected to grow, shrink, or stagnate.

It's a key element in deciding the value of a stock and whether you want to buy, sell, or hold.

But while those estimates have fallen steeply over the past six weeks, they only hint at the true decline in earnings we're likely see through the rest of 2020.

So far, the consensus target for S&P 500 earnings over the next year has come down by 8.4%. Here's the chart of where we stand, which looks grim as is: 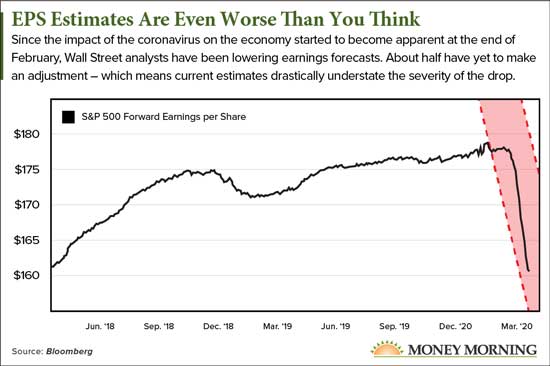 But Keith Parker, head of equity strategy at UBS, says that chart doesn't show the true damage that's coming to corporate earnings by about half.

There's great uncertainty over when the coronavirus will be under control to the point that currently paralyzed industries can restart. That has compelled many analysts - about half of them, Parker says - to delay their EPS revisions.

So right now, only about half of the EPS estimates account for the economic impact of COVID-19.

Parker assumes the laggard analysts eventually will revise their earnings per share estimates in line with those that have already done so. Factoring that in puts the "real" decline in the S&P 500 EPS estimate for 2020 at about 16%.

And given the recent bear market rally, it's apparent Wall Street has not priced in such a steep decline...

Earnings per share estimates are used to calculate forward P/E - the price/earnings ratio for the next 12 months. The forward P/E is one measure of whether the market is properly valued.

In the wake of last month's stock market crash, the lower prices dropped the forward P/E accordingly - and made stocks look "cheap." According to Factset data, the S&P 500's forward P/E fell to 13.26 as of the March 23 low. That was a 30% drop from where it was in mid-February, at about 19.

The persistent bear market rally has pushed the forward P/E back up to nearly 18.

That alone should be a red flag that stocks are overpriced right now. But it doesn't account for the drop in EPS estimates to come.

Factoring in the "missing" 8% drop in earnings forecasts puts the real forward P/E of the S&P 500 at about 20 - higher than it was at the mid-February market high.

And it could be worse...