The markets continue to rally as investors cheer news that the U.S. economy will reopen in parts of the country this week.

Starbucks Corp. (NASDAQ: SBUX) announced its plans to open its doors to more than 85% of its retail locations. Fiat Chrysler Automobiles NV (NASDAQ: FCAU) announced that it will soon restart production after a $1.8 billion loss fueled by the shutdown.

Despite the optimism, a sea of uncertainty remains about the health of the economy.

The U.S. Labor Department could report on Friday that the unemployment rate surpassed 16% in April. Consumers remain guarded about the threat of COVID-19 as they venture out. And some sectors like hospitality, airlines, and retail face steep challenges through the balance of 2020.

With that in mind, we have to be conservative in our selections of stocks in the month ahead.

Get Your Buy List Ready: This is a once-in-a-lifetime chance to get into great companies at historically low prices, so put these stocks on your buy list now...

Today, we're looking at the three safest stocks to own right now. But these aren't just stocks that will return 1% or 2% gains. These stocks all have tremendous profit potential, while still being "safe" buys...

Last week, Wall Street warned that Alphabet Inc. (NASDAQ: GOOGL) and other FAANG stocks would struggle in the face of COVID-19. But companies like Alphabet have proven that they are largely immune to the pandemic.

The "stay at home" orders didn't have the impact that many had anticipated. While the firm did report a slowdown in advertising revenue growth, its cloud revenue and YouTube revenue helped pump the stock higher and alleviated concerns about the firm's ability to weather this storm. In fact, YouTube advertising revenue increased 33% year over year. 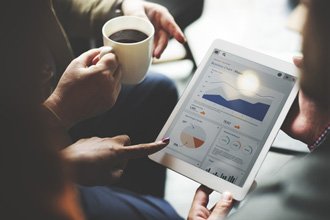 Looking ahead, the company has promised to cut marketing budgets, hike its buybacks, and seek new avenues of growth. But given that more companies recognize the importance of an online presence, we anticipate that the firm will benefit from the further digitalization of the American economy.

The company has an incredible economic moat that limits competition and protects its market share. In addition, the stock has a diverse blend of profit centers that will help the company remain stable during this challenging time.

Shares of Alphabet trade at roughly $1,350. However, there is good reason to anticipate that the stock will tick back toward its 52-week high of $1,530 by the end of the year. That price target represents upside of more than 13% through the balance of the year.

It saved its water company - Vidler Water, a firm that owns water resources and storage across Western states. The company sells water rights to Reno, Nev.; Las Vegas, Nev.; and Phoenix, Ariz. It earned about $30 million last year from the sales of water and land.

Right now, the firm has tens of thousands of acre-feet of water credits across the West, an area of the population that continues to see strong population growth. Every time the company sells land and water, it returns that capital to investors in the form of a special dividend. Looking forward, the sum of the company's assets could very well run around $17.50 per share.

The stock currently trades at $8.22. This means that the company could see its stock surge more than 100% in the next year.