Since stocks crashed 36% between February and March, a new rally has recaptured half of the losses in the Dow. The Nasdaq is also back to even on the year. 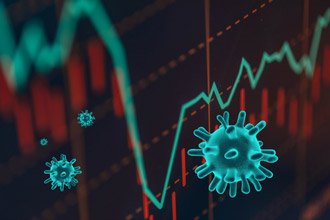 That would normally be welcome news. But a rally like this one could actually set up a second stock market crash in 2020.

Here's why you shouldn't buy the bounce.

Stocks began the year strong. They reached all-time highs by mid-February. Then the novel coronavirus began to reach American shores.

Stock losses accelerated as the virus spread and drastic steps were taken to contain it. Stay at home orders closed retail businesses.

The economic impact of the pandemic was devastating. Weekly unemployment claims skyrocketed to over 6 million. The unemployment rate surged to a record 14% in April. These were the biggest unemployment numbers since the Great Depression.

GDP fell in Q1 with expectations of a 20% to 30% decline in Q2. The federal government spent $2 trillion in emergency bailouts as the Fed injected trillions more into the economy.

The Dow hit its low on March 23 as pundits declared capitulation. Investors simply threw up their hands and walked away from the markets. There was no end in sight.

But then something curious happened.

It won't last. But we know a great way to protect yourself from a second market crash...

Why Another Stock Market Crash Is Coming

We've been calling the rally since March 23 the "FOMO (fear of missing out) rally."

Investors know a steep downturn is a buying opportunity. So our experts recommended investors begin averaging into their wish list stocks to take advantage of the historic discount. But we cautioned it was too early to go "all in."

Warning: Trillions of dollars of Fed "stimulus" can't stop COVID-19 from devastating markets and economies - but it can sure make things worse. Find out what's next in this just-released report...

Unfortunately, most investors did go "all in." Investors saw stocks gaining traction, and they simply didn't want to miss out on the gains. The result has been a virtuous cycle where the more stocks go up, the more investors want in.

But before you follow the pack, ask yourself: Are things fundamentally better than they were on March 23?

Businesses are failing despite bailout packages. J. Crew and Neiman Marcus were early victims. The airline industry is on the fritz. One CEO is even predicting a major airline will be out of business by the fall. That's not to mention local businesses that will never open their doors again.

And we still don't know the full extent of the economic impact. Q1 earnings reports were a horror show. Many companies ended forward guidance due to the uncertainty. Q2 earnings reports will be even more devastating.

There's no vaccine or effective treatment in sight. Remdesivir, the best hope right now, merely speeds up recovery from the virus by 11%.

Scientists are warning about a second wave of the outbreak coming in the fall.

Some of the best investors in the world, like Warren Buffett, are still sitting on the sideline. Buffett made a fortune in the wake of the 2008 crash. But lately, he hasn't been in the buying mood. In fact, he's been selling.

Yet the Nasdaq is up 30% and counting.

We're not buying it.

An overoptimistic rally built on hype instead of fundamentals is exactly what could start another stock market crash.

Money Morning Quantitative Specialist Chris Johnson warns "investors are probably too far ahead of themselves right now. That's always risky. But in this environment, it's even more so."

"Anything that happens to change the completely optimistic outlook here will be met with reversal in the trend."

And there's plenty of powder in that keg. It could be anything from a second wave of the virus to lackluster growth as Americans continue to stay home.

Chris says another 20% drop by the fall is a real risk investors need to deal with.

Fortunately, there's a simple way to hedge this risk.

Think of it like buying insurance for your portfolio...

How to Crash-Proof Your Portfolio Right Now