The SpaceX Falcon 9 rocket launched astronauts to space for the first time since 2011 on May 30. They went travelling from NASA's Kennedy Space Center in Florida to the International Space Station orbiting earth.

That's one small step for humankind. But we think it could also be a profit opportunity for you.

Here's how to invest in space, including which space stocks will give you the best bang for your buck… 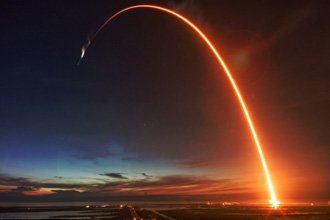 Some look at these SpaceX launches and think it's all fanfare. Who could blame them? Elon Musk's other futuristic company, Tesla Inc. (NASDAQ: TSLA), still has to prove its 150% climb over the last few months is backed by more than hype.

CEOs like Elon – Jeff Bezos and Richard Branson, for example – are eccentrics that thrive on investor emotion. They will always have a base of futurists behind their brands. Bezos is behind a space venture called Blue Origin. Branson is behind Virgin Galactic Holdings Inc. (NASDAQ: SPCE).

Many investors find these space companies intriguing, despite many unknowns. SpaceX is especially interesting, for all its highly publicized rocket launches.

Unfortunately, it's not public. Neither is Blue Origin. Your only public option out of these is Virgin Galactic. But these are not your only choices for space stocks.

Space has a serious future as an industry. SpaceX's early success gives us a glimpse into that future. And we have a backdoor play that could work out nicely for you in the years to come…

Why Space Investing Will Be a Thing

Elon Musk has big ideas. Some of them are almost too sci-fi to believe. For instance, his underground tunnel system. Or a brain implant that would eliminate the need for humans to use words in "five or ten years."

Some of those ideas work, however. After much trial and error, the company has launched 86 successful missions with its Falcon 9 rocket. The last one was only the first to carry a crew. And, as in many previous missions, they caught the booster on a platform in the middle of the ocean.

The company has also partnered with NASA and several others through its "rideshare" program to generate revenue. Rides start at $1 million.

But of course, this is just the beginning for SpaceX and the space industry.

One of the most exciting things SpaceX plans to change is travel as we know it. The plan is to send ordinary passengers into space so they can travel across the world in an hour.

This is all still theoretical – but very probable. SpaceX isn't even the only one planning civilian space trips.

Virgin Galactic is doing something very similar. In fact, it developed the world's first passenger-carrying spaceship built by a private corporation. Virgin shares are available at $16 for 60% upside potential this year. But this stock is also much more volatile than the one we have for you today.

Besides, SpaceX is the real shining star. If only it were public. If you wanted to invest in SpaceX, we have the next best thing….