Amazon.com Inc. (NASDAQ: AMZN) and online shopping have become synonymous at this point. 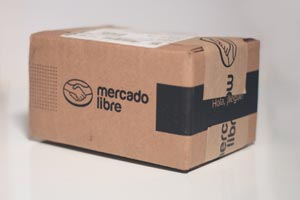 With 12 million products ranging from groceries, media services, toys, and almost any kind of electronics you could imagine, there is almost no need to shop anywhere else. Consumer surveys run by eMarketer have even shown that nearly half of U.S. Internet users started product searches on Amazon, beating out Google for the No. 1 spot.

But that's just the United States.

That is why I am so excited about MercadoLibre Inc. (NASDAQ: MELI), a company that people are calling the Amazon of Latin America (LATAM).

While I have been excited about this company for a while, I was recently listening to Visa's President speak at the RBC Financial Technology Conference. He had a lot of interesting things to say about global spending and e-commerce in the wake of COVID-19, but one thing really caught my ear. He said, "we saw more than 13 million e-commerce first-time users in the second quarter. That's two out of every 10 active cardholders in LATAM."

That's a truly amazing statistic and something we won't see in the United States, since we are already there. Combine this with the fact that e-commerce only made up roughly 4% of the total spend last year in LATAM due mostly to its cash-heavy economy, and there could be huge growth ahead.

So, let's jump into the company and why it's a tech stock worth buying right now...

MercadoLibre Is Growing in a Hurry

MercadoLibre, literally meaning "free market" in Spanish, operates not only the largest online commerce platform, but it also has the largest payments ecosystem in LATAM, similar to that of PayPal Holdings Inc. (NASDAQ: PYPL). MercadoLibre currently operates in 18 countries, but it's clearly on the trajectory to expand. With access to a region of over 600 million people and in an area where Internet penetration is growing at some of the fastest rates in the world, there is no better place to be focused on e-commerce and payments.

Last month, it delivered strong Q1 results in the face of the global pandemic. Revenue was up 37.6% year over year, but if you look at that revenue number on a constant-currency basis, it was up 70.5%.

MercadoLibre has a dominant position with over 300 million registered users, well above 50% of the addressable Internet users in its current markets, and it's actively looking to monetize those users. Despite its large market share, the business continues to grow its user base. After the first quarter, new active users were up 30% year over year to 43.2 million.

As the pandemic took hold in LATAM, MercadoLibre was a beneficiary of healthcare and CPG spend as people shifted spend away from physical stores. While sales did slow down in March, much like the rest of the word, April saw a significant rebound, with merchandise volume increasing 73% in the month.

But even outside of the growth during the pandemic, MercadoLibre is riding an even bigger trend higher...