Facebook Inc. (NASDAQ: FB) has been in the news this week as over 180 advertisers are boycotting the social media giant. Founder and CEO Mark Zuckerberg triggered the exodus last week when he said his company won't monitor hate speech and violence on the platform.

Some analysts expect up to one-third of Facebook's total advertisers will join the revolt.

So, what do you do if you own the stock? And is this correction a buying opportunity or time to steer clear?

Historically, Facebook has been a great buy on any pullback.

The company has been able to grow its revenue at least 20% year over year for the last decade.

And even with a $637 billion market cap today, it's on pace to grow at least 20% again this year.

Over the next month, D.R. thinks that investors will do well if they're able to buy shares between $210 and $220 per share.

That's because he expects the stock to retest its all-time highs of $245 per share after announcing that it would submit itself to an audit of how it controls hate speech. 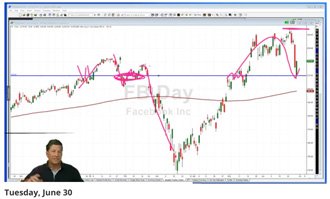 Ultimately, D.R. doesn't think the advertisers will be gone long and that this current problem is no worse than the data breaches FB suffered in the past...

So, yes. You should buy Facebook stock on any additional pullback and hold it for the long run.

If you missed D.R.'s live stream today, you can catch it on our YouTube channel, here.

He's going to be updating investors on the two indicators he thinks could cause the stock market to turn over from its recent rally.

Got a question you want our experts to cover? Send us a note.