Stocks just had their best quarter since 1987, but the market's volatility is likely to remain high. Uncertainty still prevails as some states see reductions in new COVID-19 cases while others see new infections soar.

The good news is that there's a way to profit from this uncertainty using options. And today we're showing you an options trade easy enough to do on a commission-free platform like Robinhood or WeBull.

While stocks have recovered from the COVID-19 crash in March, they've been treading water since their June 8 high, and gold has quietly broken out to the upside. It's going to go higher, too. Much higher.

The 5 Best Trades to Make: A whipsaw market is a trader’s paradise – and our top trading experts just gave us the best trades to make right now. Click here to get them for free...

Money Morning Quantitative Specialist Chris Johnson believes that the time is finally right to look at gold and gold stocks because the trend is proving to be long-term.

Gold typically performs well during times of uncertainty or market downturns. But that's not what happened this spring. Recall that when the stock market tanked in February and March, gold fell with it. Apparently, investors were scrambling to raise cash from every place they could.

But that changed in a hurry. As soon as the stock market found its bottom, so did gold, and it rallied nicely for a few weeks. Then in mid-April, gold basically got stuck. It traded sideways between $1,675 and about $1,775 per ounce, frustrating bulls and bears alike. 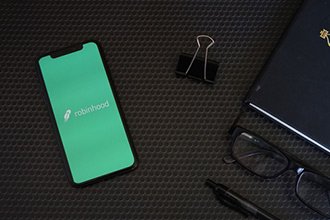 That is, until last week, when it moved higher from that range. It was its highest price since 2012, but more importantly, according to Chris, it was a technical breakout that could have legs.

Gold stocks are also breaking out to the upside. Since peaking in May, the gold sector had been falling in what turned out to be what charting enthusiasts call a bullish flag pattern. It gets its name from its appearance of a flag flying on a flagpole. But no matter what fancy names we use, it tells us that the correction in the sector is over and the rising trend is back in force.

And by using an options trade - one any trader can do on Robinhood - we can ride this trend to big-time profits.

According to Chris' price target, this trade could double your money by summer's end, and it has the potential for ever-higher gains if uncertainty rises again...

The Best Options Trade to Make on Robinhood Now

Chris sees one gold stock in particular set up to be a prime trading opportunity. It checks plenty of his technical boxes, too, such as trading above major moving averages. And the fundamentals look better with the recent announcement that the company will be expanding mining territory in Canada and Greece. It plans to dig deeper, minimalize cost, and ramp up production through 2020 and beyond.

He is looking for a 30% move higher by the end of this summer. Keep in mind that is only about two months from now, so this one should move quickly.

The stock is Eldorado Gold Corp. (NYSE: EGO), which has operations, ongoing development projects, and exploration in Turkey, Canada, Greece, Brazil, Romania, and Serbia. Eldorado stock has a similar pattern to the rest of the gold mining sector. It eased lower since April as gold traded sideways, but last week, it popped higher in a breakout. It trades for $9.48 today, and that puts it right below a threshold that should spark more buying. Chris says that the $10 level is where demand for the stock tends to pick up.

He expects a 30% jump in the share price once that technical indicator is hit, and that should be by the end of the summer.

You can own the stock and grab that gain, but we like use options to really kick things up a notch.

It's been generating money hand over fist since the recession of 2008... and now, he's finally sharing the secret! Investors in today's economic climate need every advantage they can get, and I don't think I've ever seen a strategy more powerful than this. Click here for the full story and the next three plays he has his eye on.