Only a few short years ago, most people had never imagined having a digital assistant in their home to answer questions, play music, or even order products online for them. 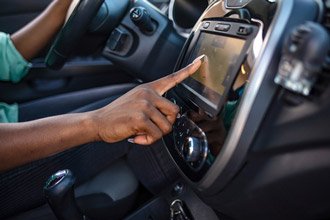 Now, more then 200 million smart speakers have been sold with 147 million units sold globally in 2019 based on data from Strategy Analytics. That's a 70% growth rate over 2018. Most major tech companies sell one, including Amazon Echo, Apple HomePod, and Google Home. Truly amazing for an industry that started less than a decade ago.

Now with AI-based virtual assistants becoming more mainstream, they are moving out of the house and off the phone to a new frontier.

Your car. And that's turning into the next tech avenue lined with profit potential, especially for the AI stock I'm about to show you.

Each year, roughly 70 million cars are sold globally, and most of them have not advanced like many pieces of consumer technology. Yes, there are some cars on the market where you can tell it to play the next song or call someone from your phone book using your voice, but that is just scratching the surface.

While the global automotive market may have slowed down as people continue to work from home, people have no intention of giving up driving. In order to comply with social distancing, people have actually shifted to driving versus taking public transportation in order to avoid large groups of people.

Despite the slowdown in automotive sales, one company managed to grow revenue 23% in Q2 2020, a sign that this technology is the future.

This space is ripe for innovation, and that is why I'm looking at Cerence Inc. (NASDAQ: CRNC), a company at the forefront of digital technology. It is reinventing transport with technology ranging from virtual assistants to voice biometrics.

Despite being founded in 2019 as a spin-off from Nuance Communications Inc. (NASDAQ: NUAN), a leading conversational AI company, Cerence has spent over 20 years in the automotive space as a combined entity, building relationships with major automakers and developing its technology solutions for the automotive market. It is far from a newcomer to this industry and has over 1,000 patents and supports more than 70 languages.

And it hasn't dominated this space by sitting idly by. It is constantly innovating.

Its voice assistant solution is one of the smartest on the market. It builds personal profiles and knows who is talking to it. This means it can create personalized experiences by playing the user's favorite songs, direct you to the best-priced gas station if you are low on gas, and even connect to your home alarm system or other smart home functions.

But more than an exciting company, it's one that can make you money.

That's especially true when you look at two major catalysts the stock has going forward...

AI-based virtual assistant technology will become a mainstream offering in the next decade, with MarketsandMarkets estimating the global connected car market will be worth $212 billion by 2027, up from $42 billion today. This means there is plenty of room for Cerence to grow with a market cap of less than $2 billion.

One thing I like to look for in companies I invest in is a competitive moat, which Cerence has. With a huge patent portfolio and Tier-1 automotive customers, it has the ability to grow within its customer base.

Currently, there are roughly 325 million vehicles globally using Cerence technology integrated into over 60 automotive brands worldwide. These customers are some of the largest automobile manufactures and product manufacturers, including Toyota, GM, Ford, Audi, BMW, Bosch, and Harman. With this large list of Tier-1 customers, Cerence should be able to hold its market share versus competitors and grow its product within customers.

Having traditionally focused on bringing on Tier 1 OEMs as customers over the last 20 years, Cerence has the ability to expand its TAM by selling new and improved solutions to current customers and working with lower-tier OEMs.

This is already starting to happen, as Cerence has made deals with Great Wall Motors and China-based Geely Auto, which owns Volvo. It also plans to double content per car, which would roughly double what it earns per vehicle to the $15-$20 range over the next few years. It is planning on doing this by building on its voice platform and adding look- and gesture-based interactions.

While Cerence does compete with Apple Inc. (NASDAQ: AAPL) and Google's (NASDAQ: GOOGL) auto platforms, Cerence holds a major advantage by being built directly into the vehicle. This includes voice commands that are connected directly to navigation, climate control, media, and text messaging, something Apple and Google cannot do outside their own ecosystem.

While the pandemic has had a major impact on the global economy, Cerence has continued to make progress with its customers. As mentioned earlier, year over year revenue grew 23%, and during the quarter it announced the largest booking in the company's history with a European OEM for a contract valued at $125 million. This along with other contracts has led to profitability last quarter. On a non-GAAP basis, there was also a significant improvement in operating margins, increasing from 23.6% to 31% year over year.

While the stock is up almost 150% since its IPO, it has refinanced its debt and put itself in a position where it has ample liquidity. As a software company, it is still trading at a reasonable price-to-sales ratio of 4.7, lower than the industry average of 7.16, according to NYU Stern Data.