Somebody forgot to tell the triple-net lease REITs that the world is ending. 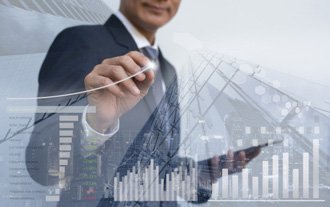 Triple-net real estate investment trusts (REITs) own properties that are rented to single tenants. The tenants are responsible for paying all the expenses associated with the property, including maintenance, taxes, and insurance (that's the "triple-net" part). The leases tend to be long term, with 10 to 15 years being standard. The owners collect the rent and pass it on to us as shareholders.

While these REITs often have high exposure to retail tenants, they tend to be the types of businesses that are considered essential, which helped them stay open throughout the shutdown. Grocery stores and pharmacies stayed open the whole time, as did convenience stores and big-box warehouse stores. They also own a lot of fast food properties, most of which also remained open for drive-through service.

In a world where many REITs have had to cut or eliminate their dividends, the best triple-net REITs have raised their payout to shareholders in 2020.

And when stocks fell this spring, REITs were swept up in the selling even if their portfolios remained strong. They've even lagged behind the market's recovery.

COVID-19 lockdowns inspired a lifestyle change that's kicking a new billion-dollar market into high gear - and this stock is the best way to play it. Get the pick here - it's free...

But that's great news for you. If you're kicking yourself for not buying more stocks in March, you still have a chance to get into some of the best REITs at a sizeable discount right now. You'll be locking in a better-than-average dividend yield when you do too.

Here are the best REITs to buy to add some much-needed income to your portfolio this summer...

The best in class triple net real estate investment trust right now is W.P. Carey Inc. (NYSE: WPC). This REIT owns 1,215 net lease properties covering approximately 141 million square feet in the United States and Western Europe. It has a massive edge over many of its competitors because more than 40% of its tenants are in the warehouse and industrial sector. It also has a lot of exposure to the self-storage market, which has also been somewhat immune to the pandemic's economic stress.

W.P. Carey has a very high occupancy rate, with more than 98% of the space it owns under leases. It focuses on larger companies with strong credit profiles, so it has not had any problems with broken leases or uncollected rent during the economic shutdown that impacted many other REITs in the United States and Europe. Ninety-six percent of rents were paid on time in April, and 95% were paid up in May. We don't expect to see June's rent collection rate deviate much from that level.

Despite this limited impact to its revenue, the share price plummeted 50% from its February highs and has yet to fully recover. That's an opportunity.

Its average lease still has 10 years to go until renewal right now. Best of all, about 99% of all leases have contractual rent increases built into the lease, so the amount of cash collected by W.P. Carey goes up automatically every year. The more cash it takes in, the more it pays out to us as shareholders. In fact, it just raised the dividend in June. At the current price, the yield of the shares is 6.27%. It has increased its dividend every year since its 1998 IPO.

W.P. Carey raised over $300 million last month by selling 4.75 million shares of stock in a secondary offering. The proceeds will be used to pay down some debt and make acquisitions in the current weak market for many types of commercial real estate properties.

W.P. Carey is a fantastic position right now. It has triple-net lease properties full of tenants with goof credits and essential businesses. The cash is flowing in the door, and it just added to its war chest to take advantage of current market conditions.

This REIT Is a Dividend Aristocrat

Realty Income owns over 6,500 real estate properties around the United States. Its top four property types are convenience stores, drug stores, dollar stores, and grocery stores. All of these were considered essential and have stayed open during the shutdown. In the second quarter, it collected more than 85% of the rents that were due under its leases.

Realty Income does have some exposure to movie theaters and health clubs that have struggled during the pandemic. Some of them will not survive, and the REIT will have to locate new tenants. But these are rough patches any company will go through.

Management had seen difficult markets before and performed superbly. During the Great Credit Crisis, Realty Income did not cut its dividend, and the stock price rose during the crisis. Of the 11 REITs included in the S&P 500, Realty Income was the only one that was able to grow its earnings in the worst market for real estate in decades.

Through good markets and bad, this REIT has performed. It has raised its dividend 107 times since its IPO in 1994. The monthly payout increased 90 times consecutively. Realty Income is one of just three real estate investment trusts to be included in the elite S&P 500 Dividend Aristocrats Index. The current yield is over 4.5% right now.

If you are in the market for high yields in a zero-interest rate environment rising dividends and market-beating long-term returns, net lease real estate investment trusts are one of the best tools for hitting your investing goals.