Armed with a smart phone and a trading app, tons of new investors are taking the markets by storm. Robinhood has 10 million users now, compared to just 1 million in 2016.

I think it's fantastic that a new generation of investors are accessing the massive opportunities the markets provide. More investors in the market means that there is the opportunity for more robust, fairer pricing.

More dynamic markets also means that more ideas are going to flow through the daily narrative. Simply put, crowd-sharing of investment ideas means that you're more, not less, likely to find an investment that fits your risk and objective profile.

Of course, there is a downside… solely relying on the actions of a crowd can lead people to flat-out bad investments.

A real-life example would be Hertz Global Holdings Inc. (NYSE: HTZ). Investors, who looked at a sub-$1 stock and saw a bargain, piled in by the busload. The stock rallied 700% even as its (inept) management team was dotting the i's and crossing the t's on the bankruptcy filing.

Sometimes there are real bargains... and sometimes cheap is cheap for a good reason.

But you don’t have to get stuck in another “Hertz-trap.” You can learn how to leverage the crowd's activity on platforms like Robinhood for maximum profits.

And I’m going to show you how – starting with some of the hottest stocks on Robinhood right now, and giving you the best, safest way to play 'em…

Two Stocks to Turn This Trend into Gains

Let’s take a look at Workhorse Group Inc. (NASDAQ: WKHS). This electric vehicle (EV) manufacturer is just up the road from me in Cincinnati.

The name went big-time, and the stock shot through the roof beginning in mid-May, as it emerged as one of the most popular additions to Robinhood accounts. The "herd" quickly caught wind of the name pushing shares to highs above $24.

Now, this company is still in its formative period - like another popular alternative vehicle stock, Nikola Corp. (NASDAQ: NKLA) - so we're going to hear a lot about the company's fundamentals.

All the activity around these shares - its whole current narrative - points to big "trade potential."

Shares have pulled back from their highs and are trying to find support at $16, without much luck. (Remember Trading Commandment No. 8: Round numbers usually give support and resistance.)

To that end, my chart and intuition tell me that the stock isn't done with this pullback and the smart money is likely to get a better deal by using a limit order to grab WKHS shares at $14.

From there, the herd is likely to push WKHS higher towards $18. That is where I'd recommend placing a 5% trailing stop-loss sell order, which would generate a 25% to 30% gain. 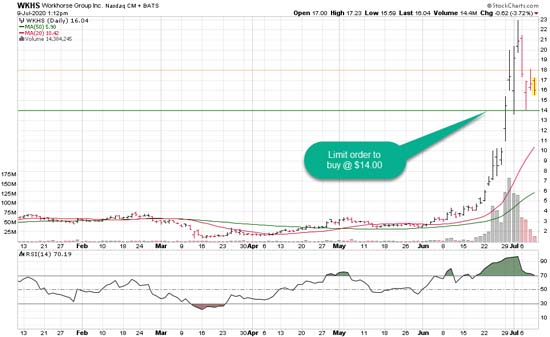 Plug Power Inc. (NASDAQ: PLUG) is another popular stock among online investors right now. You'd be forgiven for thinking that this company had just had its IPO due to all the hype around it, but the fact is that Plug Power has actually been around since November of 1999.

Want to really be blown away? The stock, currently trading at $9 and some change, traded at a split-adjusted $1,565 at its highs!

I've made Night Trader recommendations for PLUG calls this year. My readers following along got a shot at closing out half the position for a 55.1% gain, and the other half for a 93.8% profit.

This stock is just irresistible, and it's a great one to play by the technicals!

Plug Power has become one of the most popular Robinhood stocks over the last month as the company has closed on additional acquisitions to its hydrogen power portfolio while investors are embracing the alternative energy movement.

To be fair, Robinhood investors haven't been the only group "herding" PLUG shares higher. Wall Street analysts have been all over this stock with multiple upgrades and price target increases.

The results are a dizzying 150% rally since the beginning of May, although we're seeing the buzz die down a bit as the stock works its way out of an overbought situation.

Here's where I see the trade potential playing out...

Shares of PLUG look as though they could be headed to a target of $7.50, about 15% lower from here. That's where I think a limit order to buy the shares looks attractive.

From there, I set my target at $9.50, which is where a 5% trailing stop-loss makes sense. This provides a 20% gain if the shares hit that trailing stop. If PLUG shares keep rising, so do your profits! 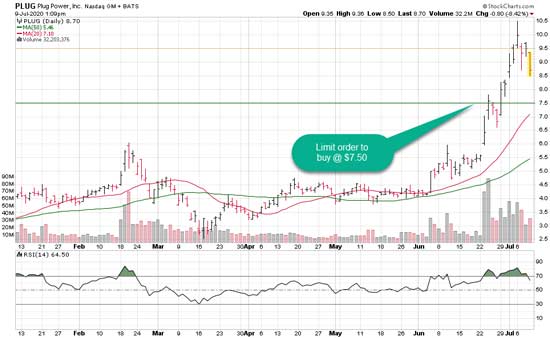 There you go: Two rock-solid investing and trading plays derived from activity on Robinhood.

So you can see, if used correctly (and that's the keyword here), Robinhood and other online, mobile investing platforms can be great tools, both in terms of investing and trading ideas you can glean from its user base and the access it grants to the markets.

Speaking of "access"... I want to invite you to click here and learn how to get access to my live Night Trader trading room. It's your chance to hop in, have a look over my shoulder, and see how I recommend my "Morning Trade." You could be among the first to hear about what I think are the possible top profit opportunities of every trading day. It's a shot at capturing 52%, 78%, or even 108% in a matter of days.