Congress is debating another round of stimulus payments to keep the economy afloat as the COVID-19 pandemic continues to spread across the United States. 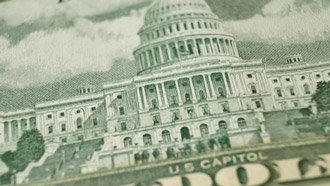 Republicans have their model of what they think represents an effective stimulus package, and the Democrats have theirs. The correct response is in the middle, so it will be interesting to see how long it takes the two to see the obvious and compromise.

While we don't yet know the specifics, the bill is expected to inject $1 trillion to $1.5 trillion into the economy, and it could be ready as soon as next week. Whatever form the stimulus package takes, it is a safe bet some of it finds its way into the stock market yet again.

Today, we're going to show you how to make the most of the next rally after a new stimulus bill is passed, including one stock you won't want to miss...

Everyone was surprised by the move the first time around. No one thought retail traders had that buying power, but when they are home, bored, and fed free cash from the government, they can even move a giant stock like Tesla Inc. (NASDAQ: TSLA) higher than a fractional share a time.

Tesla is up 190% since the last stimulus bill in March.

If it looks like a deal is getting close, particularly one that extends enhanced unemployment benefits, then the FAANG stocks, or the MicroSectors FANG+ ETN (FNGS), will be a good play.

But the FAANGs aren't the only play here.

A new stimulus package will be fantastic news for landlords as well. Enhanced unemployment benefits enabled many folks who would have otherwise struggled to keep the rent paid and the lights on in the pandemic's early stages. They are now more than a little worried about what happens if the unemployment benefits enhancement goes away.

More than 20 million Americans are looking for jobs at a time when the economy is closer to shutting down again that it is to a full reopening. If Congress doesn't pass an additional stimulus package, it could get ugly.

I think most legislators know that and are also aware that this is an election year. It may be contentious and ugly, but even a Congress as fractured as the current version in D.C. should be able to recognize the necessity for a deal to get done. They will pass it as much to get reelected as any desire to do the right thing.

That will be fantastic news for real estate, specifically multifamily housing.

And that money could pour into well-positioned REITs...

The Stimulus Stock You Need to Own Now

The company's renters, in most cases, are not the high-tech work-from-home employees we might find in larger cities. These tenants are either essential workers or laid-off workers hoping for an enhanced unemployment extension.

So far, Independence has been collecting most of the rents due.

The REIT said occupancy was 93.5% through the end of May, and it had collected 98.1% of May rent receipts, including 1.2% in deferred payment plans.

If we see a stimulus package that allows its tenant base to stay current until the pandemic truly passes, we will also see enormous appreciation potential as the shares regain lost ground.

IRT is up 25% since the last stimulus, and we could see another rally if a new one strengthens support for renters. Shares currently trade for $11.23, but they were cruising above $14 a share since last September. A return to that level would make for another 25% pop on top of its hearty yield.