Four times a year - once each quarter - publicly traded companies drop their protective veil and give investors a look at their books.

It's kind of like a financial "State of the Union."

We call it "earnings season."

It's always one of the most important times of the year for stocks.

And the current earnings season - which started this week, and which will continue through the month of July - is the biggest and most important in a decade.

At risk is the $10 trillion in shareholder wealth that's been created since the market bottomed in March.

In my 30 years of professional trading, I've never seen a stretch where investors needed actual results and "forward guidance" from companies reporting their earnings as much as they do right now.

My job - and I love it - is to categorize the stocks of these companies as "high risk" or "low risk" and to guide you accordingly. What I'm going to show you will let you add to your portion of that $10 trillion windfall - and avoid giving any of it back.

An old mentor of mine once told me that the day of an earnings report is one of the single points in time when investors can actually value a stock based on the underlying company's performance - and executives' "forward guidance" - instead of market perception.

We're talking about revenue, profits, and cash flow - the "fundamentals" that help forge market perception of a company and its shares.

The problem? We only get that fundamental view of stocks four days a year. The other 246 or so trading days are left for investors to speculate where a company is headed - and they "vote" by buying or selling its shares.

That's never been more true than during the COVID-19 pandemic, which tossed all interpretation of companies' "values" in the air like a deck of cards. Earnings results and outlooks were all sidelined - putting the market's fate into the hands of speculative investors.

In the last round of earnings reports, companies braced us for a rough period with their forward-looking outlooks. They came clean with the bad news expected to be generated by the self-quarantining, business shutdowns, and the biggest spike in unemployment in the history of the modern U.S. economy.

And investors were OK with that.

They were looking past the pandemic and were betting that Washington's liquidity spigot would trigger a "V-shaped" rebound.

The result: a mind-numbing rally of 45% that created that $10 trillion in wealth.

But that rally is only missing one thing: confirmation.

Frankly, there are going to be companies that provide exactly that - a confirmation that investor speculation was correct. These select companies - and I do believe there will be a select few - will continue to thrive as investors flock to their shares.

For the companies that disappoint, the downside will be dramatic.

Determining the difference between the two is a much more "common sense" approach than most folks think.

BBBY shares rallied more than 200% from the company's last earnings report in April. That's more than the 65% surge enjoyed by retailers and more than the 45% surge of the general market.

But then it missed on earnings last week - with revenue down 49%. The shares plummeted 24.5% the next day as investors walked away.

This wasn't a surprise to me: During my daily Night Trader live stream ahead of its earnings, I warned watchers that the stock looked "shaky" ahead of its earnings. And I believe BBBY is likely to continue for another 30% to 40% from here as the market readjusts its expectations and the bullish speculation gives way to escapist selling.

In other words, there's still room to profit from this opportunity - but on the "short" side, instead of the long one.

The fact is that there are three basic tips that will help us navigate our way through this crucial earnings season. To do this, you should:

Of course, there are other dynamics that will get you determine whether a stock is "high risk" or "low risk."

As we move through earnings season, I'll be tracking each week's high-profile names and publishing an update to give you a heads-up on the "high risk" and "low risk" stocks.

In short, I'll show you where money can be made - and where it might be lost.

As an owner of two dogs and being housebound like everyone else the last four months, I love my iRobots. But we're talking about the stock, not the product. And these shares are on my "high risk" list.

IRobot stock is trading 168% higher than its March lows and about 60% higher from its earnings date in late April. The stock has been a leader and one that investors have been speculatively buying - maybe too much.

Last quarter, the company saw a 19% decline in revenue. Not great. The earnings beat by a small margin, but margins are tightening in this environment.

The last two months of rallying have taken the stock above its long-term trend lines, but I'm seeing a shift in the shorter-term trends that suggests investors are taking their profits.

To add some technical analysis to the mix, I'm seeing resistance at $85. That's based on the long-term 50% retracement levels - a fancy way of saying this stock is unlikely to go higher than where it trades today, around $84.

That setup puts iRobot on my "high risk" list with a target price of $70.

Action to Take: If you hold the stock, you may want to add a tight trailing stop to get out on a decline. More active traders may want to look at the September $80 puts (trading around $8 a contract) to hedge the potential post-earnings selling. 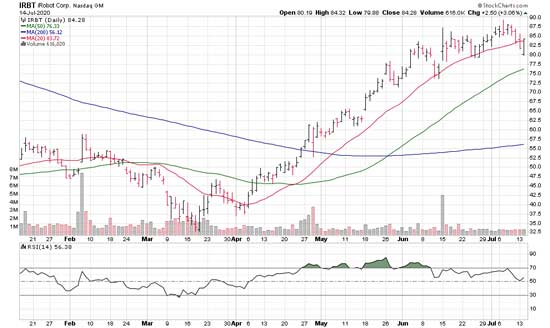 Quest is one of the largest clinical laboratory testing companies in the United States. Not surprisingly, the company has been active with COVID-19 testing - testing that is hitting warp drive as we see a resurgence.

The company will report its earnings results on Tuesday, July 21, before market open.

Since the last report, DGX shares are trading about 50% higher. That matches returns for the broader market, so this is a stock that hasn't been bid higher by wild speculation.

Last quarter, Quest beat earnings estimates, despite a slight miss in revenue growth. Shares were rewarded with an immediate rally that subsided. There is good reason to believe both revenue and earnings will be better. I mean, they're performing COVID-19 testing.

Now, the stock sits just dollars below its all-time highs, and the technical charts are attractive to the bulls.

All three of the boxes are checked on Quest Diagnostics. This stock makes the "low risk" list as a candidate to outperform the market after earnings.

Action to Take: DGX looks like a good stock to own through earnings. 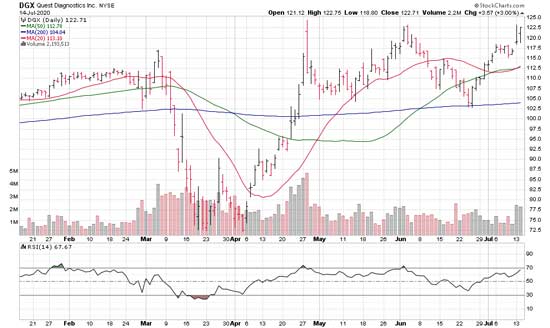 Sometimes the lesser-known names give you the best opportunities. That's what I'm seeing with Core Labs.

This energy company provides fluid analysis in the petroleum industry. There's a problem with that right out of the gate; we're seeing oil exploration start to slow again.

CLB shares are trading almost 100% higher than where they were right before last quarter's earnings report. And it's not because the earnings report was stellar.

Last quarter, CLB missed earnings expectations as the company saw a 10% decline in revenue. Despite that miss, speculation pushed shares higher. Now the company needs to provide some great numbers - or face the speculators' wrath.

The chart for CLB is not good. Shares are testing critical support while the "trader's trend line" is shifting into bear mode. Remember my Bed, Bath & Beyond example? Core Labs is trading in a long-term bear market trend just like BBBY.

This all adds up to a negative outlook for Core Labs as it heads into earnings. I'm targeting a 25% decline to $16.

Action to Take: You can play the downside on CLB. Check out the September $17.50 put options (trading around $1.60 a contract) if you want to position for a profit from this move. 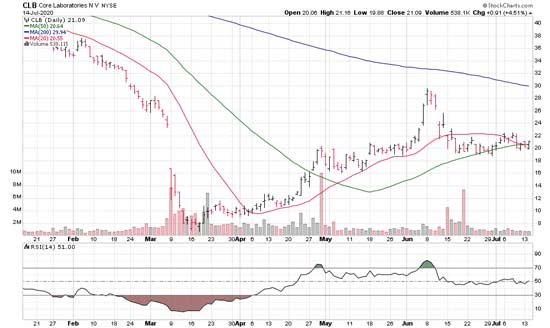 And in the meantime, I want to invite you to click here and learn how to get access to my live Night Trader trading room. It's your chance to hop in, have a look over my shoulder, and see how I recommend my "Morning Trade." You could be among the first to hear about what I think are the possible top profit opportunities of every trading day. It's a shot at capturing 52%, 78%, or even 108% in a matter of days.