This is exactly how it's supposed to work.

This is how it's supposed to play out.

This is the "value" - the wealth - we want to deliver your way.

Let me show you what I mean.

Starting with a little trip back in time...

After the coronavirus transitioned from "threat" to "pandemic" earlier this year, the once nearly invincible U.S. economy and U.S. bull market each took a beating.

The rise in algorithmic trading led to a record-setting bear market in March. From its closing high on Feb. 19, it took only 16 days for the Standard & Poor's 500 Index to take the 20% hit that usually qualifies as a true "bear market."

That's even faster than the heinous Great Crash of 1929 (leading to the Great Depression) and the free fall in October 1987 that historians refer to as "Black Monday."

It only took 19 days for stocks to plummet 30% - also the fastest on record, says MarketWatch.com.

Just take a look at this chart... 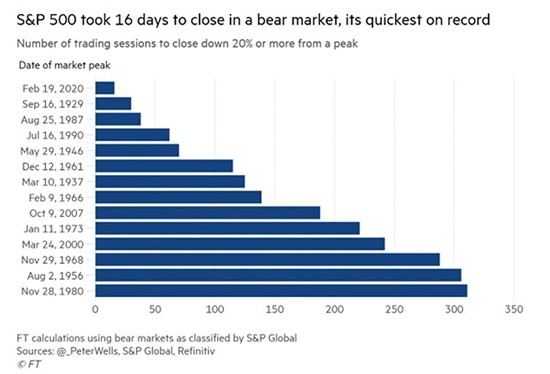 I dubbed this elevator-shaft free fall the "Infection Correction." And for a contrarian investor like me, that kind of extreme sentiment - indeed, extreme negative sentiment - is an "investment call to arms."

And in a special report back on March 16, I answered that call for my Private Briefing readers.

I brought them a series of "Infection Correction" wealth plays that have paid off big. And one of those was a re-recommendation of chipmaker Nvidia Corp. (NASDAQ: NVDA).

Nvidia was a stock we originally brought my subscribers way back in June 2013 - at $14.44 a share - and it's become one of my all-time favorite wealth plays.

Money Morning resident tech expert Michael A. Robinson and I did the initial workup on Nvidia. And I continued to follow it closely - with frequent updates all along the way.

By mid-February of this year, Nvidia had soared to about $319 a share - meaning folks who acted on our original "Buy" call were sitting on a from-the-beginning gain of more than 2,100% (that's right, a "21-Bagger").

Then came the coronavirus pandemic - and the free fall I dubbed the "Infection Correction."

Nvidia shares were slaughtered. They were pounded all the way down to $196.40.

Clearly, institutional investors had thrown in the towel.

But I knew better. Which is exactly why I put Nvidia on my list of "Infection Correction" wealth plays.

How have we done so far? Well, Nvidia shares have rebounded - zooming to a new record peak of $426 a share.

The stock gave up some of those gains since that apex (totally expected after such a hefty gain in such a short time). But even its Thursday close of $405.39 represents a double-your-money gain of 106% in less than four months.

The real kicker is that Wall Street is suddenly interested in Nvidia: Recently, one analyst even pronounced that the company is entering "beast mode."

In short, we were way ahead of Wall Street - which is now following our lead.

Indeed, following your lead if you were riding along with us. But if you weren't, that's okay, too, because it's not too late to get in on this stock. With all the attention on it, I believe it still has plenty of room to grow.

Nvidia is a stock you can "Accumulate" - using pullbacks to build a stake of your own.

And there are other plays just like this one.

We'll continue to bring them your way - here in Money Morning and in my daily Private Briefing advisory.

And we'll watch as Wall Street keeps playing its favorite game - "catch up."

And in the meantime, don't forget to check out my friend and colleague Michael Robinson's latest presentation for a potential six-figure payday opportunity...

You see, working from home, telemedicine, and even online grocery shopping are trends that've been here for years without causing any problems... until February.

That's why the FCC had to step in - and its $10 billion initiative could translate to a huge payout because of it. Click here to check out Michael's research...