Cannabis stocks are going to get their biggest catalyst yet from the presidential election in November. And we're going to show you some of the best cannabis stocks to buy for up to 171% profit potential before then.

This is a hot-button issue in federal, state, and local elections like never before. 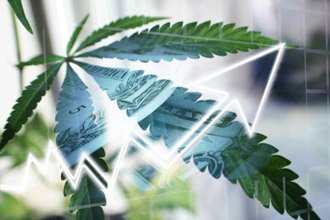 Democratic candidate Joe Biden has made it clear that cannabis "has to be, basically, legalized." He is leading in the polls.

But it doesn't necessarily matter which way the election goes. Yes, even without a sweeping federal law, cannabis legalization in the United States has been making huge progress at the state level.

We covered a few months ago how the coronavirus has state lawmakers dreaming about revenue from marijuana legalization. And that's just the beginning...

Unemployment is at 11% right now. It was just 3.6% to start the year. That will put even more pressure on state governments to legalize marijuana to create jobs.

Money Morning Director of Cannabis Investing Research Don Yocham says it's a "solution that doesn't require tax dollars to make it happen." Dispensaries have been open during lockdowns-and they've been booming.

This is only going to be more the case moving forward. As of now, at least four states have some sort of marijuana legalization on the ballots this year.

For instance, New Jersey has started to decriminalize, but recreational use will also be on the ballot. Arizona will have it on the ballot, with 62% of Arizonans in support. Even on-the-fence states like Idaho will have another shot at collecting signatures for a ballot measure, since COVID-19 got in the way. Nebraska will also vote in November.

This is all going to fuel our top cannabis stocks to buy now. Some of these are American companies with interests in legal marijuana states. Some could be international cannabis companies who would benefit greatly from an open U.S. market.

But they are all pot stocks to hold ahead of elections in November. We'll start with the obvious (and why it's worth buying up), then see our 171% grower...

The Big Winner of Marijuana Legalization

Canopy Growth Corp. (NYSE: CGC) is one of the best-known cannabis brands on the market. In fact, it could be the first one that comes to mind -- for good reason. The company has partnered with celebrities like Drake, Seth Rogen, and Martha Stewart to get its brand on the map.

It's also getting investment from other big companies. Earlier this year, Constellation Brands Inc. (NYSE: STZ) announced it was exercising 18.9 million warrants to buy Canopy shares. Constellation is the beverage giant behind beers like Modelo and Corona. Their CEO said Canopy is the best "pure play" in the marijuana industry.

This is a Canadian company, but its budget makes it a prime candidate for penetrating the U.S. market as it opens up. The company has an agreement in place to acquire Acreage Holdings if cannabis is fully legalized in the United States.

That's why this stock could make the biggest move if marijuana is fully legalized.

For now, you can purchase shares of Canopy Growth for $16.96. This is one of the longer, more stable pot stocks to hold in the lead-up to the election.

But this next marijuana stock could pop 94% in the following months...

If You Buy One Marijuana Stock, Make It This One

Trulieve Cannabis Corp. (OTCMKTS: TCNNF) is one of our favorite marijuana stocks today. It's based in Florida, with locations in California and New England as well.

Although Florida failed to get legalization on the ballot this year, it's still one of the fastest-growing medical cannabis markets in the United States, thanks to a large elderly population. It's only a matter of time before recreational use arrives. Remember, the ballot is only one method for states to legalize marijuana. The state legislature and governor can do it at any time.

Trulieve is another "first-mover" set to take this opportunity. The company has a foot in the door as Florida's top marijuana brand. It also has licenses to operate in more dispensaries than any other retailer.

It's no surprise the National Institute for Cannabis Investors says this could be "the top cannabis company in the country."

Our next top cannabis stock is in the same ballpark and could nearly double, with 95% profit potential...

One of the Original Marijuana Companies in the U.S.

Green Thumb Industries Inc. (OTCMKTS: GTBIF) might not be as flashy as Canopy Growth. But it is right up there as one of the best marijuana stocks to buy.

In fact, if success was based only on who got there "first," Green Thumb might be at the top. This company is 10 years older than Canopy.

But that's not all. This company's revenue is still growing much faster. Green Thumb reported revenue at $102 million in Q1 of this year, up 267% from the same period last year. It was a 35% jump from the prior quarter.

Green Thumb continues to open stores in states with budding legal cannabis markets. They currently have 44 retail cannabis spaces in the United States. But the company owns licenses for another 52 stores. That's 96 locations in 12 different U.S. markets. As states proceed to legalize moving forward, there's little doubt Green Thumb will arrive there soon.

Analysts predict this stock could hit $25 from its current $12.82. That's a 95% potential gain from today's share price, and it carries some weight. The company continues to accelerate, even after breaking $2 billion in market cap.

Analysts are also predicting $430 million in revenue for the company this year.

The Best Marijuana Stock to Buy for Growth

Tilray Inc. (NASDAQ: TLRY) is a Canadian medical marijuana provider incorporated in the U.S. The company became the first medical cannabis company to trade on the NASDAQ in July 2018.

You've likely heard of Tilray before, when it popped 400% between its debut and October 2018, when Canada legalized recreational-use marijuana.

Though Tilray has taken a vast dip from above $140 to just above $7 today, it's in good company. Cannabis stocks have suffered as the young industry has struggled to sort itself out. The ETFMG Alternative Harvest ETF (NYSEArca: MJ) has lost 64% since February 2019.

But now that sectors are more defined in the industry, Tilray has an important first-mover opportunity that could enable it to make some acquisitions in the U.S. cannabis industry when it legalizes.

This isn't going to be the most stable stock, and the companies we've shown you above are running better businesses with better long-term potential. But if you have some money to speculate with, this one might give you a nice pop after more states legalize marijuana this November.

Some analysts give it a 171% price target over the next 12 months.

The cannabis industry is on track to become a $1 trillion industry as it goes global. With that kind of capital on the line, the profit potential here is absolutely stunning.

But you don't want to get into this blindly.

That's why the National Institute for Cannabis Investors teamed up with a very special guest to deliver you three need-to-know considerations before you touch a single cannabis stock.

You can learn all about them right here.