We're on track to see the first $2 trillion company at some point in 2021 - if not before the end of this year.

That mammoth figure refers to market capitalization - the total dollar value of a company's shares of outstanding stock. 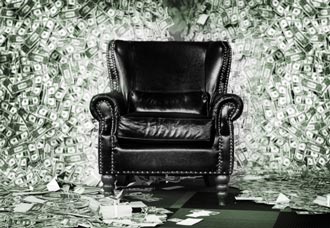 It was only two years ago, in August of 2018, that Apple Inc. (NASDAQ: AAPL) became the first trillion-dollar company.

Today there are four trillion-dollar companies.

Amazon.com Inc. (NASDAQ: AMZN) made it just five weeks after Apple. Microsoft Corp. (NASDAQ: MSFT) crossed the $1 trillion mark in April 2019. Alphabet Inc. (NASDAQ: GOOGL) was the most recent member, hitting a $1 trillion valuation in January of this year.

And while Apple is currently in the lead to reach the next milestone of $2 trillion, its two closest rivals - Microsoft and Amazon - are very close behind. Here are the standings as of Monday's close: AAPL - $1.646 trillion; MSFT - $1.544 trillion; AMZN - $1.527 trillion.

Alphabet is a distant fourth with a valuation of $1.044 trillion.

Some might argue Saudi Aramco beat all of these contenders to a $2 trillion market cap following its IPO in December. But as a state-owned company with a ton of other caveats, it isn't really comparable to the U.S.-based Big Tech stocks.

That leaves us with a three-horse race. You can make a convincing case for each of them...

How the Apple Market Cap Gets to $2 Trillion

Apple has the vote of analyst Dan Ives of Wedbush Securities, who thinks it could get to $2 trillion before the end of this year.

Apple has history on its side. It was the first company to reach several previous valuation milestones, including $700 billion, $800 billion, and $900 billion in addition to the $1 trillion mark (which I predicted in 2014).

The 5 Best Trades to Make: A whipsaw market is a trader's paradise - and our top trading experts just gave us the best trades to make right now. Click here to get them for free...

AAPL stock has performed well this year despite the COVID-19 drag on the economy. Shares are up more than 29% year to date. Apple also tends to be a "momentum" stock, and so far this year, sentiment has been very bullish.

Apple's prospects for the next few years are very strong. Most expect shares to get a big boost from the next model of the iPhone, due in the fall. It is expected to include 5G cellular technology, which should spur a healthy upgrade cycle.

But Apple has sources of growth beyond the iPhone. Apple's wearables segment - the AirPods and Apple Watch, mostly - has enjoyed double-digit growth over the past couple of years. Loup Ventures analyst Gene Munster has forecast that this category will grow 20% a year for the next five years.

Services revenue has tripled since 2014 and accounts for about 14% of revenue. Research firm Trefis expects revenue from this segment to double by 2025. That's huge because Apple's profit margins on services are nearly twice that of its physical products.

And as if all that weren't enough, Apple is in the very early stages of a major push into healthcare, with the Apple Watch serving as the beachhead. Morgan Stanley estimates healthcare could bolster Apple's revenue by anywhere from $15 billion to $313 billion annually by 2027. The midpoint is $90 billion, which would be a revenue boost of nearly 35%.

How the Microsoft Market Cap Gets to $2 Trillion

Microsoft also has an advocate on Wall Street, Wells Fargo Securities analyst Philip Winslow. He sees MSFT stock rising to about $283 by 2023 - well above the $265 required to reach a $2 trillion valuation.

Last week Microsoft handily beat expectations on its Q4 earnings. Revenue rose 14%. Growth came from almost all corners, including not just its lucrative cloud businesses but also hardware segments like Surface and Xbox. This is a company firing on all cylinders right now.

Still, the main engine at Microsoft these days is the Intelligent Cloud Unit, which includes its Azure cloud infrastructure services. Azure has steadily gained market share in a business that continues to grow quickly.

Now the COVID-19 pandemic is forcing companies to move more of their operations to the cloud, driving a transition that would not have otherwise happened for years. That means more business for Azure to grab.

Not to be overlooked is Microsoft's well-planned transition to subscription-based services, as opposed to selling one-time licenses. Not only is its cloud business set up that way, but now so are its legacy Office and Windows businesses. And a new version of Windows promises to give Microsoft a leg up on the trend toward foldable mobile devices.

Steady growth and steady revenue streams make Microsoft a solid contender in the race to $2 trillion.

How the Amazon Market Cap Gets to $2 Trillion

Amazon stock has outshone both Microsoft and Apple in 2020 - and by a long shot. Shares are up more than 65% year to date, more than twice the gain of its two rivals.

Amazon historically has been deceptively successful. While it has grown revenue rapidly, profits have appeared to lag. I say "appeared" because Amazon plows a ton of money back into its business.

CEO Jeff Bezos is always pushing to innovate the shopping experience and speed up fulfillment. He also has used profits for acquisitions and to fund the development of new growth centers such as its market-leading cloud business.

The strategy has paid off. Amazon is the undisputed king of e-commerce. And its Amazon Web Services cloud business remains the runaway leader even with the gains Microsoft has made in recent years.

And AWS is Amazon's secret sauce when it comes to growing profits going forward. While AWS makes up less than 14% of Amazon's revenue, it contributes more than three-fourths of the company's operating income.

This is the essence of Thill's argument. He estimates AWS revenue will nearly triple by 2022, which will feed a dramatic increase in Amazon's profitability and push the stock price to the required $4,010.

Why This "Race" Matters to Investors

This may come as a disappointment, but I'm not going to pick one winner here.

Because it makes little difference which company gets to $2 trillion first.

What matters is that all three are almost surely going to get there. And it's no accident each is a Big Tech company.

In other words, you'll make money no matter which of these stocks you buy.

"As I like to remind investors, the road to wealth is paved with tech," said Money Morning Defense and Tech Specialist Michael A. Robinson. It should come as no surprise that Robinson has recommended all three stocks to his readers.

Robinson has been saying this since at least 2013. And we can prove it's still true. Just look at the market's track record over the past two and a half years.

Since Jan. 26, 2018, Big Tech - Apple, Amazon, Microsoft, Alphabet, and Facebook Inc. (NASDAQ: FB) - has accounted for nearly all the market's gains. Through Friday's close, the combined market cap of the "Big Five" had a gain of about 76%.

But if you back out the Big Five, even that small gain shrinks to just 1.53%. And it translates to a puny gain of just 0.61% per year.

"Tech is the only sector in the world today where investors can buy just a handful of stocks - and in some cases only one - and become a millionaire," said Robinson.

In 2008, Andrew Keene was down and out... when he discovered an obscure 18-digit "code" that let him see when hedge funds were making incredibly lucrative trades.

He wondered if he could tag along on these mysterious trades - taking his slice of the profit.

The result? At a time when most people were seeing their 401(k)s dwindle...He made $5 million in just two years.