Until Barry ("Asterisk") Bonds leapfrogged him 13 years ago, Henry Aaron had been Major League Baseball's all-time homerun king for more than three decades.

Yet, in one of those cool ironies of life, "Hammerin' Hank" always said that the "triple was the most exciting play in baseball."

Let me tell you: I get what "Oh Henry" was saying - the triple is edge-of-your-bleacher-seat exciting. A player drives the ball into the outfield, and it skitters past the fielders and rolls to the wall. Then the player sprints around the bases and slides into third in a cloud of dust - hoping to beat the throw that's intended to gun him down.

With MLB's return last week, I caught a couple of Cincinnati Reds games. And I realized that there's a stock market equivalent to the baseball triple.

You see, the most exciting play in investing is the "short squeeze."

That's what happens when an investing pro tries to beat the bullish "shift" in today's market by betting against a particular stock. And because the loss on that kind of a bearish bet during a bullish rally is potentially unlimited, the pro has to "cover" by purchasing the shares in the open market.

When a whole bunch of bearish pros on a particular stock have to cover all at once - meaning they're elbowing one another and stampeding through the narrowest of doorways and grabbing shares at every and any price - that stock goes vertical like a ballistic missile.

And there's nothing more exciting than having that happen to a stock you already own.

You see, we're on the verge of the absolute-most-exciting play in all of investing: It's something I refer to as an entire "short-squeeze market."

We're talking about a nearly vertical ascent to the bull market's peak.

It's in the on-deck circle. It's about to happen.

And here today, in the spirit of that excitement, we've created a "triple opportunity" - three short-squeeze market stocks that will let you cash in.

Short sellers bet against the bulls - typically on a company-by-company basis.

They've got their reasons. Maybe they think a company has lousy management. Or they see poor execution on the firm's business strategy. Or they think the stock is overvalued (in layman's terms, it's "gone too high").

And after one of the biggest three-month rallies in history, short sellers have amassed billions of dollars in short positions. If the market keeps marching higher, those positions will start racking up hefty losses for those pros.

To understand why, let's quickly review the mechanics of a short transaction.

It starts when the short seller borrows the shares of a particular company through a broker - and then immediately sells them in the open market. The proceeds from that sale goes into their account - at least for now.

At this point, this trade's success is dependent on one thing: The trader has to be able to buy the same stock back at a lower price.

Remember, since the pro "borrowed" the stock that they sold into the market, those shares must be returned to the broker.

The broker doesn't care what the price of the shares is when they get them back; they just need the shares back.

Think about it as if they had borrowed a car. The car owner doesn't want cash back; they want the car back. Same thing here.

Let's make it real - with a real example.

That sounds awesome, but we don't own that cash free-and-clear: We still owe the broker those 100 shares of Apple.

Now, say Apple drops to $350 a share - not unreasonable, since that's where the stock was trading at the end of June.

Of course, this can play out another way.

And this other way is painful - even excruciating.

Well, we've lost $5,000. And with every single dollar the stock climbs, our losses climb, too.

With a straight stock purchase, our losses are limited to what we paid for the shares. But with a short sale - because a stock can keep climbing - our losses are potentially unlimited.

Indeed, the higher the price gets, the greater the pressure to close.

At some point, of course, we've got to cut our losses and exit such a loser of a trade.

The terrible irony: To do this, we've gotta buy the very stock we were betting against.

It's the ultimate act of capitulation. And it puts added upward pressure on the shares.

And if the "short interest" on a stock is high - meaning our bearish club has a lot of members, each of them scrambling to buy back shares to stop their bleeding - that upward pressure can have the force of a rocket engine.

That's why the pros describe this pattern as a "blow-off top."

A growing number of short sellers are getting caught in these short squeezes worth billions of dollars. Each of these squeezes has the potential to generate short-term bullish opportunities for traders like you and me.

But taken together, they can create a "short-squeeze market."

And you heard it here first.

For an important bit of context, let's understand how to ID a short squeeze before it happens (i.e., when it's in the making).

And I've developed a three-step "screen" to do just that.

Short-Squeeze Filter No. 1: Say "Yes SIR." SIR stands for "short-interest ratio," a metric calculated by dividing the total short interest for a stock divided by its average daily trading volume. What's considered a "high" reading? In my 20-plus years of trading and research on short interest, I've nailed it down to one easy number - six or higher.

Short-Squeeze Filter No. 2: Be Bullish. Remember, higher prices are Publicly Traded Enemy No. 1 to the short seller. Knowing that, we're only interested in short-squeeze candidates that are moving higher. Take the list of stocks you created via Screen No. 1, and zero in on those that are in a strong bullish trend. One of the simplest measures of a stock's trend is the direction of its 50-day moving average. If the stock's 50-day is trending higher, it's bullish - and the shorts are feeling some pain.

Short-Squeeze Filter No. 3: Set Your Trigger Price. Determine a "trigger price"-the pain point where the shorts are likely to capitulate - which is where the short-squeeze begins. Good "trigger" candidates are new highs (either 52-week or all-time record), or round numbers such as $20, $50, or multiples of $100. Naturally, these are relative to your starting-point price. But the greater the number of zeros, the greater its potential as a trigger point.

Once you've got all three covered, it's time to get into the stock before the squeeze starts - and before the short sellers start pushing the share price higher as they battle to cover their losing positions.

Let's look at a recent trade that kicked back a 600% profit.

Alternative energy firm Plug Power Inc. (NASDAQ: PLUG) has long been one of my favorite stocks to watch and trade. Lots of other traders view it the same way - which is good, since that means it's sensitive to technical trendlines. All that has combined to make it a favorite of short sellers, too - until recently, that is. 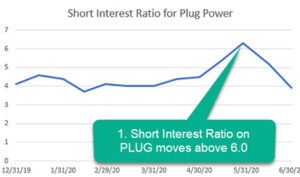 Here's how I identified this opportunity in the Short Squeeze Market.

At this point, the stock checks all the boxes as a pending short squeeze trading play. And that meant it was time to create a bullish position - before the shorts stampeded to cover their escalating losses.

The trigger price was hit on June 4, followed by a rush of buying that drove PLUG shares to $6 each over the following four trading days.

At that price, the stock position returned a tidy 41%. The option position closed that day at $1.11 per contract, a 640% gain over less than two weeks.

A 640% gain in less than two weeks is pretty doggone exciting.

But here's a bottom line that will rev up any trader: If you invested $1,500 in that options trade, you walked away with $11,100 in less than two weeks.

This might be even more exciting than a baseball triple.

And with short interest generally so high right now, there are more than 194 companies that are squeezing the shorts to their tipping point. We're on the doorstep of a short-squeeze market.

Indeed, with billions of dollars in short interest bets still open right now, short-squeeze candidates are being created every day.

Here are the two stocks ready to fly as the shorts get forced into a buying frenzy...

Focusing on providing digital payment solutions for small- and medium-sized businesses, some might equate PagSeguro Digital Ltd. (NYSE: PAGS) as the PayPal or Square of Brazil. With its shares trading just a few dollars below its trigger price, this Brazilian fintech is starting to make short sellers sweat. Let's walk through the three "filters" that I use:

I love TherapeuticsMD Inc. (NASDAQ: TXMD) as a low-dollar pharmaceutical stock that brings with it a special "kicker." The company specializes in products for women that range from prenatal vitamins to menopause-related therapies. The recent rally has been as hot as the Florida summer sun, just one of the reasons it's in the short-squeeze market.

BONUS: TXMD is on the Robinhood Investing Top 100 list. If you read my recent article on the "Robinhood Phenomenon," you know that means the shares are being day traded - adding rocket fuel to the short-squeeze market.

I always like extra-inning games - I mean, who doesn't - so I thought that I would give you a few extra players that made my list from the short-squeeze market.

Of course, this is just one of many opportunities out there. You can have expert options trades delivered right to your inbox each week. In fact, I have an exclusive invitation for Money Morning readers.