U.S. GDP reportedly fell an annualized 32.9%, the largest quarterly drop in history, according to a U.S. Department of Commerce Report.

We had already been in recession since the coronavirus crash, marked by two consecutive quarters of GDP loss. Now, it's the biggest quarterly loss in American history.

That can be a sign of dark things ahead for the economy. But it can mean something positive for our best penny stock to buy now. 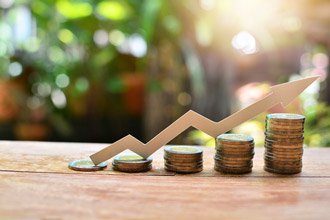 It's one to watch, because penny stocks have more money-doubling potential than your average blue chip.

According to the U.S. Securities and Exchange Commission, penny stocks trade under $5 a share. That low share price means they make big percentage moves when they get a catalyst.

That means doubling or tripling your investment in mere months.

If you had bought Workhorse on Jan. 30, you'd have 494% more money than you started with.

Another example is BioNano Genomics Inc. (NASDAQ: BNGO). It popped 107% after announcing its genome-mapping technology had been adopted by the University of Iowa.

Do you see the trend here?

Penny stocks earn big. And this top penny stock is poised to gain 197%…

Lenders focused on non-prime customers could be getting more attention as consumer credit tightens.

Elevate claims to have "originated $8.4 billion in non-prime credit to more than 2.5 million non-prime customers to date." It's saved $7 billion for customers versus the cost of everyday loans.

Harder economic times, unfortunately, could mean even more customers. But that's great news for anyone looking for the stock to pop.

This shows financial prowess in the front office.

The company also recently announced a partnership with SpringFour to deliver more educational resources to customers and make its digital tools more useable. This is added value for a customer base looking to qualify for a loan.

Elevate is set to report earnings next Thursday, Aug. 6. It could be worth picking up shares ahead of this date as momentum builds.

As economic conditions are realized, analysts project a $6 price target for Elevate in 12 months or less. That represents a 197% gain for the stock from today's price of $2.

Action to Take: With signs of the economy tanking underway, quick gains can still be realized from penny stocks. You just have to look in the right places. The non-prime consumer credit sector could get a boost in an economic downturn. And Elevate Credit Inc. (NYSE: ELVT) is one of the best penny stocks to benefit from that. Pick up shares for just $2 for 197% profit potential.