Precious metals like silver and especially gold have had a stellar year, to put it mildly.

The physical bullion-backed SPDR Gold Trust ETF (NYSEArca: GLD), probably the easiest way to invest in gold, is up more than 30% this year.

If you bought it at the March bottom, you'd be up even more, nearly 37% or so.

Since the last great gold bull market ended in 2011, this is the most movement (and most profit) gold investors have seen.

Thanks to the bull run, gold seems to be everywhere; Wall Street is talking about it again, ads for gold are everywhere on television, and mobile app-based traders are piling in.

In the long term, they're absolutely right: Gold and silver will keep rising, and I'll show you why.

But do not join the crowd. At least not yet. What's unfolding right now will burn many overeager traders before it creates a big buying opportunity.

The real short-term opportunity I'll show you in a minute holds even bigger profit potential, and it won't be long in coming.

There's a New Reason to Buy an Old Asset

Gold's "uselessness" as an industrial metal (compared to other precious metals, it has just a handful of industrial applications that don't factor much into its price) is a benefit to investors: It retains stability and value more easily than, say, crude oil.

Or, more to the point, fiat currencies.

Here is a chart from the St. Louis Federal Reserve showing how much money is floating around in the U.S. economy:

As you can see, this "M2" measure of money has been rising steadily since 2016. You'd expect that, as the money supply grows along with the economy.

But then you get to March of this year, and suddenly M2 spikes.

Here's another chart, showing the assets of the U.S. Federal Reserve, also since the beginning of 2016:

The Fed's balance sheet held steady until 2018, when the central bank started to deleverage, trying to bring markets back to normal after the 2008 financial crisis.

At the end of 2019, the Fed had to intervene when the banking system briefly seized up. It did so by lending banks money it had created out of thin air in return for assets, mostly Treasury bonds.

You can see that uptick in the Fed's assets in the chart above.

Then we get to March of this year, and just like the M2 measure of the money supply, the Fed's balance sheet shoots up, almost doubling in two months.

As part of the stimulus, the Fed started pumping money into the system. That's what you're seeing in these two charts.

The Fed has several different programs to accomplish this, but they all boil down to this: In return for a bank depositing Treasuries, bonds, bond ETFs, and so on at the Fed, the central bank transfers money to that bank.

Generally, this is a loan - although recently the Fed has also started buying these assets, too.

What makes this a monetary stimulus is the fact that the money the Fed sends to the banks didn't exist before. It's literally created out of thin air.

You could think of it as "printing money," although nowadays it's all done digitally.

Because the economy ground to a halt in March, there really wasn't enough money in the system. So an intervention like this was required (although whether the big banks should have benefited the most is another question).

So what's all this have to do with the price of gold?

Well, all this new money finds its way to the stock market. As we've talked about before, there's nowhere else for it to go. There's little to spend money on right now, with stores, travel, and even most sports and sports gambling events all closed or severely curtailed.

With interest rates so close to zero, savings accounts and Treasuries don't hold much allure.

So the stock market is the only place left. And so the money flows...

Hertz Global Holdings Inc. (NYSE: HTZ) is a great example of this: Shares of the bankrupt company were trading for $0.56 apiece before a wave of speculators drove it up 887% at one point. My old employer, Eastman Kodak Co. (NYSE: KODK), appears to be another emergent bubble catching the eye of truckloads of new day traders looking to roll the dice.

There's also something else happening...

You'd still expect stock prices to move up, simply because the Fed has created new dollars.

In short, it's a form of asset inflation. With much more cash (as we see in the form of M2 above) chasing the same number of stock shares, prices of those shares are practically forced to go up, as if one stomped on a tube of toothpaste.

That's precisely why gold has been rising so fast.

As I said, gold's value doesn't change much; there's little industrial demand for it, and even the demand for jewelry has dropped amid COVID-19 lockdowns.

So if anything, gold is slightly less useful now than it was this time last year. But because we've created so many new dollars, an ounce of gold trades for more dollars now than it did before.

In fact, protection from this kind of inflation is the traditional case for investing in gold, but these are unprecedented times.

Gold Is Your Best Play on Inflation

See, precious metals are not particularly good in protecting from crashes.

In March, as during the 2008 financial crisis, gold prices eventually crashed along with everything else. When margin calls started to hit large accounts, the institutions used gold as their "asset of last resort" and start cashing it in to cover those margin calls.

When people panic, lose their jobs, and the economy seizes up, people want money. So they sell everything.

But once stimulus gets going, central banks start creating money out of nothing, and governments go on a debt binge; currencies become less valuable while gold stays steady.

In the long term, this will continue. There's no end in sight for this stimulus. Earlier this week, Fed Chair Jerome Powell said the Fed would do whatever it takes to support the economy.

So expect more money to be conjured up.

And while Congress and the White House are deadlocked in negotiations over another stimulus package, it's clear there will be one - and the price tag will be in the trillions.

So the dollar will continue to lose its value, while gold will stay steady.

Before silver's recent spike, that ratio had ballooned as high as 120:1 - the highest it's been in the last 100 years: 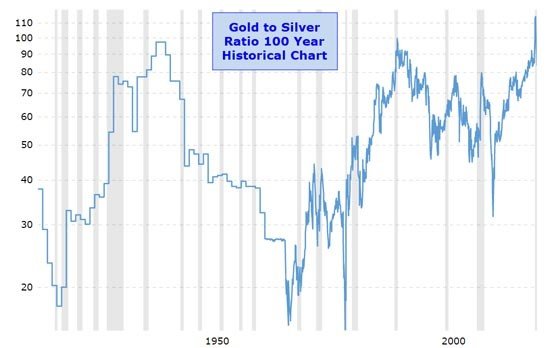 As you can see, this current financial climate is unlike anything we've seen. Those kinds of short-term discrepancies tend to work themselves out. Indeed, silver jumped and caught up quite a bit in the last couple of weeks:

But a long-term profit trend and a two-week, 30%-plus rise aren't the same thing. The rocket ride is likely over, or it soon will be.

As I'm writing this, gold and silver prices are both below their short-term highs (which, in gold's case, also happens to be its all-time high) as investors take profits - but they're both still at the top of the chart.

In the short term, the drop is likely to continue. Both metals are overdue for a pause. Savvy traders will use this time as a chance to get set up for profits. For instance, in my Dark Edge Project trading room, where my research tracks the vast, global flow of institutional capital, we're actively stalking an opportunity to buy puts on the SLV ETF.

When I see indications that institutions have started to take large amounts of short-term profits off the table, I'll send my Project Members an alert. You can click right here to learn how to get access to my Dark Edge Project trading room - and all my best research.

The bottom line is this: Gold and silver's long-term profit potential will be huge. With stimulus outpacing GDP growth by leaps and bounds, it cannot be otherwise. On the other hand, profit taking and a healthy pause mean the short-term profits from GLD and SLV puts will be huge, too - and much faster.

What other commodities do you cover?