One of the simplest ways to understand the growth in the price of Bitcoin is to look at the amount of people using it. And that number is slated to surge over the coming years.

Bitcoin became the world's first cryptocurrency in 2009. Since then, it has grown exponentially with over 50 million unique Bitcoin wallets created and those users conducting roughly 300,000 transactions daily. 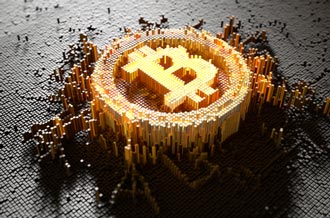 Those are some impressive numbers on their own given that a significant amount of this growth has come over the last few years. In January 2015, there were roughly 2.7 million wallets and the price of Bitcoin was at $281.

Now Bitcoin has reached over 50 million users and it's worth roughly $11,500 dollars. That's a 4,000% increase in value, handily outpacing the stock market. While its value has increased, its use case has as well. You can use Bitcoin to make purchases on Overstock.com Inc. (NASDAQ: OSTK), pay your phone bill with AT&T Inc. (NYSE: T), buy credits in games at Zynga Inc. (NASDAQ: ZNGA), and even spend money with Microsoft Corp. (NASDAQ: MSFT), one of the largest companies in the world.

With millions of people owning Bitcoin, it has become a very liquid market for trading. Over $4 billion worth is traded every day according to Coin Metrics, and if that number continues to grow at its historical growth rate, Bitcoin will need less than four years to exceed daily volume of all U.S. equities.

That's made other cryptocurrencies enormously profitable as well.

In fact, many of our customers trading with Tom Gentile's Microcurrency Trader have made some big gains on these cryptocurrencies too, like a 393.7% winner on Chainlink. If you want to see how they're doing it, just click right here.

But Bitcoin's growth is far from over, and that's creating a totally new opportunity for you…

Why the Price of Bitcoin Is Set to Explode Higher

Bitcoin's mainstream presence is just starting to take off. Just look at Square Inc.'s (NYSE: SQ) recent earnings on Aug. 5, 2020, to give you an idea of what's happening.

Square's net revenue surged 64% year over year, quite an impressive feat during the pandemic. But what I really want to narrow in on is that revenue from Bitcoin grew to $875 million. That is a 600% gain from only one short year ago and over 2,000% from two years ago. Bitcoin is actually so big within Cash App that it made up 46% of total revenue for Square. That number was practically 0% only a few years ago, and now without Bitcoin, it would have almost no growth this past quarter.

But here is the thing: Square's Cash App only reaches 30 million monthly active users and 7 million cash card users. This is not a small number by any means, but just imagine another major payment service giving users the ability to buy and sell Bitcoin. If Square is any indication of the growth of Bitcoin, more access could help this cryptocurrency market explode.

While PayPal Holdings Inc. (NASDAQ: PYPL) has not officially announced cryptocurrency trading to its massive user base of 346 million people, sources have told CoinDesk that the "fintech giant plans to roll out direct sales of cryptocurrency." CoinDesk's source also says that they have already partnered with Paxos as its crypto brokerage. This means Bitcoin could be coming to PayPal sooner than we think in order to compete with platforms like Square.

We could be in for a game-changing moment for cryptocurrency and Bitcoin as this would raise awareness and give frictionless access to almost 350 million more users, a larger than 500% increase over the current amount of Bitcoin wallets users.

Do i need a brokerage account to use Tom Gentile's Micro-currency?

While some "full-service" brokers do provide this service, other primarily online platforms like Robinhood or Ally may not.

To trade Tom's microcurrency recommendations online, you will need to create accounts on Coinbase.com and Binance.com.

The setup is fairly straightforward, however should you have any questions I would encourage reaching out to those companies, or to our customer service department at 1(888) 384-8339 where a representative will be happy to help you.