It's not just major news media that's talking about gold right now. Even social media is abuzz with plenty of talk and reviews about the yellow metal.

"'Gold is going higher' despite recent surge, says investor who's managed a precious-metals fund for a quarter-century"

That's why today I want to talk about three of the best gold options for what I call playing the "long game" in gold. They can let you capture some nice profits in the long term. Because this gold story isn't over - as I'll show you...

First I want to show you the candlestick chart of gold. 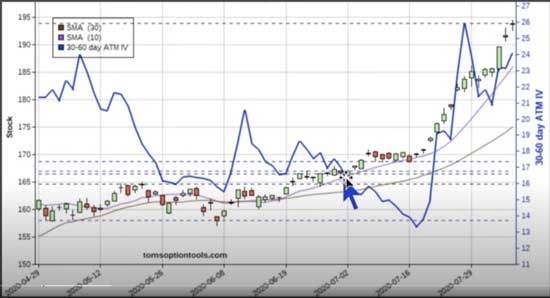 This chart goes all the way back toward the end of April, but the breakout really occurred near the end of June, and it started to really gather steam in mid-July as we went above $170.

Toward the end of last week, we were hitting $195 on GLD, the ETF for gold. Now, one thing I want to point out is that I look at the 10- and 30-day moving average lines and I use them a lot in trending situations such as this.

You see, they flagged a potential move up in GLD below $165, so those indicators proved very useful. Finally, that blue line you see on the chart is options-implied volatility and since I'm an options trader, I want to point it out to you, as well.

What it showed was that back in April and May, volatility in gold was quite high, as with everything else. But if you notice, volatility dropped, and we hit a low point around mid-July, right before we started climbing out of the $170-mark.

Once we started doing that, we saw implied volatility rushing in as option buyers were going crazy to get some of the options on the yellow metal like the SPDR Gold Trust ETF (NYSEArca: GLD).

Now let's take a look at the volume in gold.

You see the volume in gold was averaging around - and this is again for GLD - 10 million shares a day. Mid-July, we started picking up steam, and we just recently hit 26 million shares in one day on GLD on the actual stock itself.

You may be asking, "But Tom, what about the options?"

Let me show you the third chart. 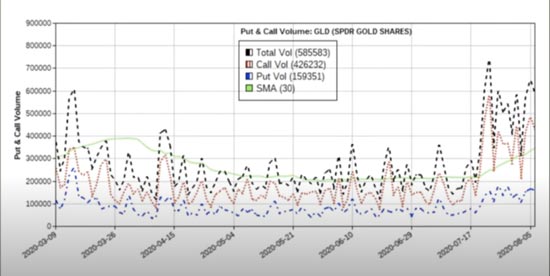 This shows us the put and call volume on GLD, so as you can see in the chart, we're looking at four different graphs here.

Now I want you to focus on the red line versus the blue line, because we're looking at put to call volume on gold, which is not the ratio, but the actual volume.

So the put-to-call volume on gold has been about two-to-one on average, meaning two times as many calls purchased as there have been puts. Now, there are times when it came down very close to one-to-one back in mid-April, near the end of May, again around mid-June, and end of June.

This movement helps show me how to play the best gold ETF I'm looking at right now...

Three Ways to Play the "Long Game" in Gold

One of two things could be happening with gold right now: (a) everybody is right on gold or (b) we've got a FOMO (fear of missing out) situation going on here.

But based on my experience, I don't want to rush in and buy gold immediately like everyone else seems to be doing right now. Instead, I want to take a calculated longer-term approach, which I'm going to show you how to do in a minute.

Keep in mind that as it goes down, you would be buying more because you'd take the same dollar weight and would put it into the shares. Then as it goes up, you'd be buying less in shares.

So for instance, if you put $500 a month into this strategy, you would put $500 into GLD regardless of its price. You get more shares as it goes lower, and you get less shares as it goes higher. How much you put into it depends on you, so check with your broker investment advisor and act accordingly due to your own risk.

Now, the exit strategy would be based on where you see GLD going. I've got two targets myself.

Next, we'll get into options. As those who have been following along know, this is something that I personally do. I sell put options on this asset.

I'm not a big fan of selling naked puts, which basically means that if I sell the put options, I'm going to get paid a premium, but I'm obligating myself to purchasing this asset at the strike price in which I sold the options for.

So for instance, I like selling out-of-the-money (OTM) puts on gold, as you can see below: 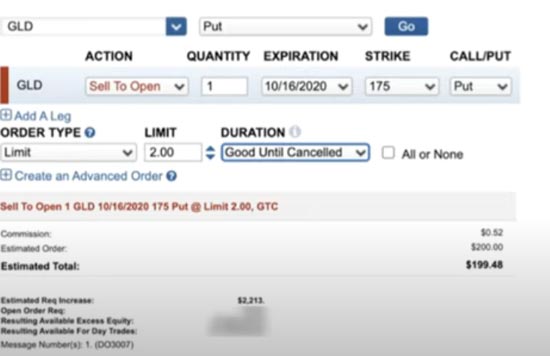 Now, if gold remains above this strike price by expiration, the option is going to expire, so I'm not going to get my GLD, but I'm going to get to keep the premium I received to open this position.

However, if GLD goes below the $175 strike price, then I'm obligated to buy the 100 shares of GLD at the strike price if it's below it at the expiration date and I'm still holding the short.

Now many traders don't want to put that kind of risk out there. And I personally don't like the call options right now, either. I would not buy the longer-dated calls on GLD because they're just too expensive.

This is a bull call spread, meaning I'm bullish on the trade, but what I want to do is I want to spread off my cost and my risk versus an outright call purchase. 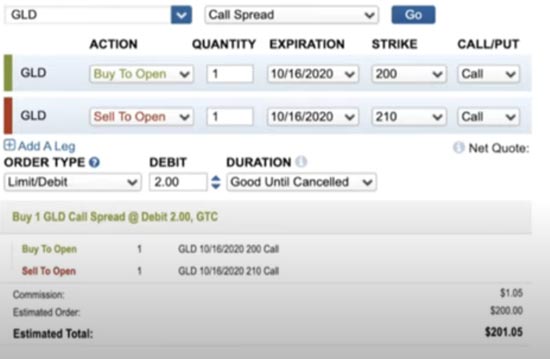 You do this for a combined cost, and here's what I mean by that...

Remember, I'm going to pay the higher premium for the $200 calls, but I'm also going to receive the premium for the $210 calls. And this is only going to cost me $200 per contract spread, plus maybe a little commission, but it lowers the cost and risk versus an outright call purchase.

In the meantime, find out how you can supercharge your stock returns...

But, of course, there's a catch: Due to market conditions, there's just a small window of time for a shot to make these supercharged profits. Right now, the market is undergoing a phenomenon I've only seen three times before - and these markets are going to change fast.

To learn how you can take advantage of this opportunity now, before it's too late, click here for the details...