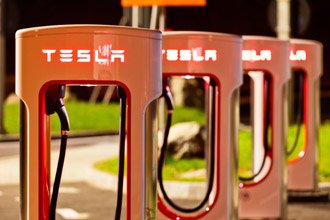 A Tesla stock split is just weeks away, and investors no doubt are wondering how it will affect them.

The news pushed TSLA shares up about 6% in post-market trading (even though the stock split changes nothing fundamental about the stock).

And it ended the trading day Wednesday up a whopping 13%.

Theoretically, the move could mean more small investors could afford the stock, but those investors are minuscule compared to major institutions.

What's more, most brokerages offer fractional share-trading now anyway. So, most of those small investors can already buy a slice of expensive stocks for as little as $1.

But with stock splits now increasingly rare, it's a good idea to brush up on how these events work and what to expect.

Today we're going to answer all of your questions about the Tesla stock split.

What is the Tesla stock split date?

What's going to happen? Do I need to contact my broker?

This is a 5-to-1 split. Each investor will get four new shares of TSLA for each one they own now.

So, if you own 100 shares of TSLA now, you will own 500 shares after the split. However, the value of your stake will remain the same.

You do not need to contact your broker. The additional shares will be deposited into your account automatically. The changes will appear on your next monthly statement. Tesla has provided more detailed information here.

How will the split affect Tesla's dividend?

Since Tesla does not pay a dividend (yet), there's nothing to worry about on that front. But if it did pay a dividend of say, $1 per share, that would be divided by five during the stock split. That would make the next dividend $0.20 per share. Investors should receive the same total amount of money in dividends either way.

Will the split have any tax consequences for Tesla shareholders?

No, the IRS does not view a stock split as a taxable event.

What will happen to the Tesla stock price after the split?

Stock splits once were considered bullish for share prices. Now most market experts see little or no long-term impact. In Tesla's case, the split may be viewed as a vote of confidence by management in future stock gains.

Why is Tesla doing a stock split now?

Here's the reason given on the company website: "To make stock ownership more accessible to employees and investors." While many on Wall Street once felt that way, retail investors can now buy fractional shares. Tesla may be thinking of its share price as more of a psychological barrier. The split-adjusted price will look more "affordable."

Will the Tesla stock split have any impact on the stock market?

It shouldn't affect anything, but it could. Tesla is not a part of the S&P 500 or the Dow Jones Industrial Average. But after seeing the jump in Apple Inc. (NASDAQ: AAPL) and Tesla stock after announcing their most recent stock splits, other boards of directors may follow suit.

How many times has Tesla stock split?

This month's event will be the first split in Tesla stock history.

Should I buy Tesla stock before or after the split?

Despite its stunning gains this year, TSLA still has abundant growth prospects. We recommend doing more fundamental research yourself, but the company is shipping more cars than ever, and that doesn't even include Model Y, Cybertruck, or the new Tesla Roadster sales yet.

Tesla also just recorded its first full year of fiscal profit over the last four quarters. So, many believe it could join the S&P 500 soon.

So where do you think Tesla stock is going?

I think it will go up when people can buy it cheaper. I know they talk about fractional shares but there is the psychological factor. This IS TSLA you know.

That is incorrect. As long as you buy before the X date (8/31), you are entitled to the additional shares.

That's a great question. I'm trying to find an answer to that too. There must be some significance to it.

From what I read on Forbes, the stock will still split on EOD 8pm EST on Aug 28th
So if you have 10 shares on Fri Aug 28th you will have 40 starting Mon Augh 31st.
However… If you have a "settled" (i.e on record) ownership of those 10 shares on Aug 21st then you will get an "additional" (i.e dividend) 4 shares per share you own.
So If I read the article right you will be given 40 shares dividend plus 40 shares at the split.

What happens to the shares bought after 21st and before 28th? They won't be split ?

I was questioning and looking for this answer as well. I believe the answer is that if you own stocks on Aug. 21st, Tesla automatically does the 5 for 1 split for all shareholders. If you buy stock August 24-28, it would be up to the broker to make that split and whatever costs that comes with that. Probably best to speak to your broker if you intend to buy stock next week.

If you buy now, you buy "with due bill attached" for the split shares. The shares will go to today's owner of record and your broker will have to claim them from that firm or person, on your behalf.

If you buy TSLA shares after the record dates but before Aug. 31, you will purchase shares at the pre-split price. Following the split, you will receive the additional shares resulting from the stock split. For example: If on Aug. 26 you buy 100 shares (and hold them through the open on Aug. 31) at $1,500 per share, you will pay $150,000. You will receive 400 additional shares after the stock split, and the price will be reduced to the post-split price.