Let me tell you: My first job on Wall Street was with the Chicago Board Options Exchange (CBOE) in the early 1980s - just before the start of the Great Bull Market.

The seeds of this revolution were sown long ago - even before I started out as an investor and trader.

Those barriers began to fall - albeit slowly.

Congress first paved the way for millions of Americans to tap into the stock market when it passed the Employee Retirement and Income Security Act of 1974. ERISA created Individual Retirement Accounts - IRAs - so retirement money could be invested in stock funds on a tax-free basis.

From a base of essentially zero in 1974, assets held in IRAs zoomed to $1.1 trillion in 1994. And they've increased about 10% a year ever since. By March of this year, IRA assets had reached $9.5 trillion - about a third of the $28.7 trillion held in retirement plans of all types, says the Investment Company Institute (ICI). 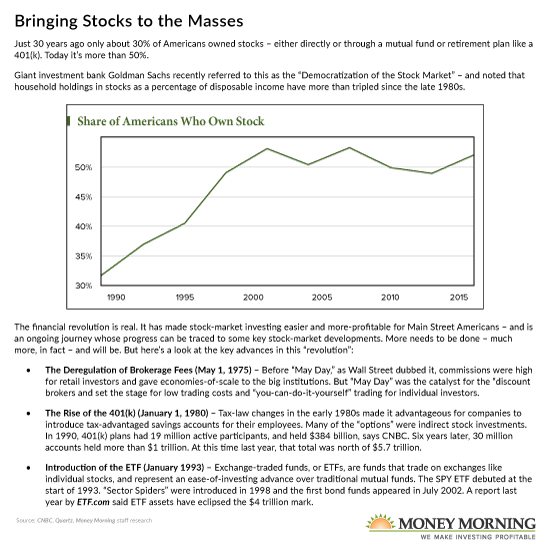 Fortunately, and most importantly, on the path to equal stock market access, in 1975, the U.S. Securities and Exchange Commission abolished "fixed commissions" - the essentially illegal price-fixing scheme the American brokerage industry established to enrich its snooty cadre of market-access gatekeepers.

At last count, Robinhood had 13 million accounts, holding an average of $2,500 each. It saw 4.3 million daily average (DART) trades in June - more than Schwab and E*TRADE combined, and more than any other single publicly traded brokerage, says a report released this past summer.

That's not just great - it's empowering.

It means each of us has more types of trading vehicles than ever before - 401(k) plans, mutual funds, ETFs, and more. The five specific companies that could be the destination for a $353 billion “capital wave” over 18 months, for instance.

Having shattered virtually every "barrier to entry" for purchasing individual stocks, only one barrier remained... until it didn't.

Stock prices have been rising, especially the most popular and most profitable stocks - meaning that even the purchase of a single share could be prohibitively expensive, if not downright impossible.

And Berkshire Hathaway Inc. (NYSE: BRK.A) - the investment vehicle of Warren Buffett and one of the best-performing stocks of all-time - that will set you back $318,000 per share, about the cost of a house in some places.

Fractional shares are now mainstream thanks to almost every brokerage offering them - most at zero commission, by the way.

The knock on Main Street investors has always been that they don't know what they're doing - that they buy too late and sell too early - presumably because they lack the knowledge, experience, and inside-track insights that the investment pros seem to possess.

It was retail investors - including a lot of mobile app users, discount-brokerage clients paying zero commissions, and new-to-the-game investors and traders buying fractional shares - who bought stocks during the market's nadir back in March, lifted it from its coronavirus lows, and continue to drive it higher and higher.

And there's no reason - no excuse - not to stake your claim. Even with as little as $5.

Start buying the stocks I've mentioned - each of them, and all of them. Since they’ve split, stocks like Apple Inc. (NASDAQ: AAPL) and Tesla Inc. (NASDAQ: TSLA) are even easier to own.

And keep buying, no matter where the stock market goes - up, down, or sideways. My team and I have put together a presentation on the very best stocks to buy for the year ahead and, critically, I’ve named nearly 20 stocks to avoid at all costs.