There has not been much IPO action this year, thanks to COVID-19. In April-May of 2020, IPO activity was said to decrease 48% for the same quarter. That came to a 67% decrease in proceeds from April-May 2019.

But that doesn't mean there isn't money to be made on IPOs. 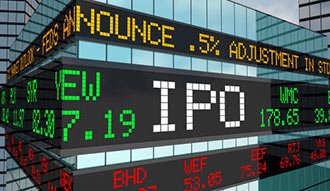 Our best tech IPOs to watch now might tell a different story...

IPO investing is great chance to invest in companies early for maximum gain. (You can invest in startups before the IPO too; click here to find out how...)

A storm of volatility has made many business leaders unsure of whether they could rely on the public market to raise funds. It's what has led to a surge in SPAC investing, or "blank check" companies, this year.

Tech stocks, however, thrived during the pandemic. The NASDAQ is at an all-time high above 11,000, sitting on 22% gains for the year so far. Compare that to the Dow, which is still recovering from its March losses.

For this reason, tech IPOs are standing out. And our best tech IPOs today could be some of the top tech stocks around, period.

These companies likely don't need to worry about raising cash in the public market. They both could be positioned to thrive on brand and market dominance.

But are their IPOs worth investing in?

Some things to keep in mind...

What to Know Before IPO Investing

With all IPOs, beware the hype.

The best IPOs can be extremely lucrative. But prices are more often inflated by news and market hysteria.

If you're too quick to pull the trigger on an IPO investment, you could end up like early investors in Lyft Inc. (NASDAQ: LYFT). The stock debuted at $72 per share, and it's down to $27 today.

That means some Lyft IPO investors have lost more than 62% of the money they put in.

Learning from this, you are going to want to keep an eye on the industry and specific sectors before investing in IPOs. Lyft investors would have been wise to look at its balance sheet and its risks before diving in.

Not only is the company unprofitable, but Lyft has lately been in a price war with Uber Technologies Inc. (NASDAQ: UBER). This has driven both stocks to about the same levels. UBER trades at $28 today, having lost nearly half its value since IPO in 2019.

The best upcoming IPOs today are a bit different. They are not in direct competition with anyone, in fact.

They are sitting on top of their respective fields. And it's hard to see anyone knocking them off the mountain.

Still, they might still have some things holding them back. You can decide for yourself.

The Airbnb IPO Is Next

Rumors of an Airbnb IPO have been swirling around for the last couple years. Finally, the digital bed and breakfast app filed with the U.S. Securities and Exchange Commission on Aug. 19.

Unfortunately, much about the offering is still confidential. The company has yet to announce a date, ticker, and other values.

We do know something about Airbnb, though. Here's what you should know in considering whether to invest in an Airbnb IPO...

On the surface, it's clear the company has been struggling financially. It was already in a rough spot pre-COVID, and the pandemic only made it worse.

According to The New York Times, the company is valued at $31 billion. That's a fraction of what it was worth a couple years ago.

Don't Miss: We're now in the midst of a generational buying opportunity, and these three stocks are "screaming buys." Click here...

Having over 4 million rental listings in 191 countries can be a great thing. But the company is also subject to various legal hurdles, depending on the location.

Many of those hurdles are in the United States. New York City officials have blamed the company for spiked housing costs. The city, along with Los Angeles and Las Vegas, heavily regulates Airbnb.

It's treated similarly in other places internationally. Barcelona, for example, limits Airbnb rentals for tourists.

Rent scandals have also followed this company. It was charged $2.25 billion in fines for illegal rentals. One host had to pay $110,925 for renting a government-owned flat.

These forces have combined to lose money for Airbnb. There could be a silver lining for this company, however.

Despite these woes, in addition to COVID, crushing its revenue, Airbnb rentals have increased. According to CEO Brian Chesky, the Airbnb has "more hosts today than before COVID started."

It has lost $330 billion in revenue since March. But Chesky says the company has also dramatically reduced costs in response to the 2020 downturn. It cut nearly $1 billion in marketing and reduced staff by 25%.

Chesky maintains the goal of keeping Airbnb "lean and nimble." He says travel "as we know it" is over, but it has not gone away.

If you consider investing in the Airbnb IPO, you would likely want to wait for it to release more information about the offering first. Financials won't be available until 15 days before the IPO date.

Even then, you would still want to eye its front office to get a feel of where it's headed.

Or maybe you'll find this other tech IPO more promising...

Why Palantir Stock Could Be the Biggest IPO of 2020

Palantir announced its official IPO with the SEC back in July 2020. One of Silicon Valley's most valuable private companies, at $20 billion, it may choose a direct listing instead of a bank-backed IPO.

That would mean, instead of selling new shares to the public market, current shareholders' stocks are simply converted to public shares. This is technically called a "DPO," or direct public offering.

Of course, you will be able to buy shares of Palantir in any case. The question is... should you?

Palantir may have chosen a DPO for good reason. Direct offerings are quicker and subject to fewer SEC requirements than IPO stocks.

It's in Palantir's best interest to avoid regulation.

You see, Palantir is among the most secretive businesses on the planet. And it's because of what it sells.

If you've ever heard of "Big Data," this is what Palantir does best. It uses artificial intelligence to analyze tons of data from various places - cameras, computers, phones, etc. - to help law enforcement make decisions.

As a result, like Airbnb, Palantir has not been scandal-free.

Many employees have reportedly left the company over concerns about the technology being misused. Political differences between CEO Alex Karp and Founder Peter Thiel have also been a source of conflict throughout the company.

Still, Palantir has relationships with West Point, the Air Force, the Marines, SOCOM, the CIA, the FBI, the NSA, the DHS, and the CDC, according to TechCrunch. It also has one of the largest Department of Defense contracts, at $222 million.

The company doesn't just serve government, either. Its data mining services have been used in the marketing field, taking data from around the web to provide better-targeted products and services to customers. It also works in healthcare and aerospace.

Palantir's institutional backing looks somewhat positive. It hopes to bring in nearly $1 billion before going public. It has already raised $550 million from Sompo Holdings and Fujitso. And it's going for $411 million more.

Some analysts, however, don't look optimistic about Palantir stock.

One of the issues with a Palantir IPO is that it would need to be more transparent about its work. CEO Alex Karp has said that companies are "less competitive" when they go public.

That sounds like a rather loaded statement from Karp. It could be that "public" is not a favorite word of this company.

For that reason, it's good to be skeptical of Palantir stock. As with Airbnb, you will want to see if any further information comes out regarding stock price and financials.

Or, you could avoid the IPO market altogether and invest in some undeniable stocks that are already public...

Three Stocks Even Better Than Airbnb or Palantir