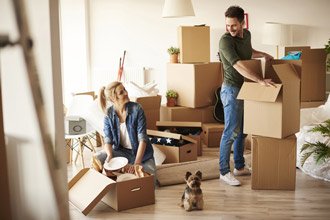 Life in the United States is different this year. And not necessarily in a good way...

The coronavirus has seemingly been unstoppable as it has roared across the United States since February.

Parts of the economy have been shut down, and many businesses had their employees work from home to try and slow the spread of the virus.

While some have brought employees back into the office, there are still millions of people working from home. And that is expected to be the case until there is a vaccine that is proven safe and effective.

Not long after it became obvious that the virus was a significant public health threat, we had civil unrest break out in cities and towns all over the United States.

Many of these protests turned into full-fledged riots with widespread destruction of property and unchecked violence.

Some Americans have had enough. They do not want to live in big cities anymore.

In fact, it's estimated that nearly one-third of Americans are considering moving to less densely populated areas in the wake of the pandemic and social unrest. That's according to new data from the Harris Poll.

With work from home becoming the new normal, people are increasingly feeling more comfortable getting "off the grid."

They want to be less dependent on government officials for support and feel more in charge of their lives. They want to feel safe again.

Since I believe this is going to be a trend that lasts for a long time, I started looking into companies that will profit the most helping people get off the grid.

Here are the four best stocks to buy now as American flee cities to the suburbs.

4 Companies Profiting Most from the "Urban Exodus"

Companies that make useful products for those looking to get away from it all will make a lot of money from the "urban exodus."

Getting off the grid can often mean having your own power source or being far less reliant on government-regulated providers.

Many of those looking for a simpler, safe life are going to look at renewable energy sources to power their homes.

The most practical choice, in most cases, is going to be solar energy...

SunPower Corp. (NASDAQ: SPWR) is one of the leading providers of residential solar power systems.

The company provides the entire system from panels to storage devices. With one phone call, you can start using solar power to provide the bulk of your electricity needs.

Solar Power even has a 25-year warranty covering the whole system as well as any needed parts and labor.

But since it is not sunny every day, and emergencies do happen, you will also want to have a generator backup system.

Generac sells both automated standby and standalone portable generators for emergency use.

The company should see a long-lasting boost in demand for its residential products as people leave the bigger cities and towns. That should help to keep the stock price moving higher.

A more rural lifestyle will give the urban escapes an opportunity to grow more of their own food.

So, Scotts Miracle-Gro Co. (NYSE: SMG) should also see more demand for its line of lawn and garden products.

The off-the-grid crowd will be buying lots of plant foods, potting mixes, garden soils, and other gardening supplies and equipment.

Scotts already sees this powerful trend drive profit growth. In the most recent quarter, sales were up 28% year over year with consumer sales for outdoor gardening and indoor and hydroponic gardening supplies.

Business is so good that in addition to raising the regular quarterly dividend, the Scotts Board declared a special dividend of $5 a share.

Both payouts will be made on Sept. 10 to everyone who owns the stock on Aug. 27.

The urban exodus should also be good for Tractor Supply Co. (NASDAQ: TSCO).

This company sells everything you need to succeed in a rural lifestyle. Its stores sell everything from hardware, truck, towing, and tool products to power equipment and work clothes.

TSCO has 1,881 Tractor Supply stores in 49 states and has an active e-commerce site that serves as a one-stop shop for recreational farmers, ranchers, and all those looking to live the rural lifestyle.

And the boom is already starting for Tractor Supply. In the second quarter, as many retailers struggled, Tractor Supply saw sales grow 35%, and margins expanded, helping operating profits grow by over 50% year over year.

Profit increases like that could help the stock double over the next year.