That Bitcoin has survived as long as it has is something of a miracle.

But according to something called the "Lindy Effect," Bitcoin's hard-won survival - it will be 12 years old come January - suggests it will endure for at least another decade. 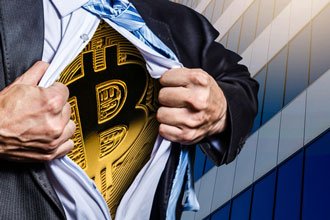 And longevity bodes well for Bitcoin price gains. The value of one Bitcoin has soared from just pennies in 2009 to more than $11,000 today. Bitcoin price predictions foresee gains to as high as $1 million over the next 10 years.

The rising likelihood that Bitcoin is indeed here to stay - coupled with the allure of stunning gains - is what has attracted an increasing number of deep-pocketed investors to the cryptocurrency.

Back in May, Jones talked to CNBC about why he was investing in Bitcoin, and that he had put "just over 1% of [his] assets" into it.

The one-time Bitcoin skeptic said that the inflationary central bank response to COVID-19 got him looking for stores of value. He called cash a "wasting asset." And he started looking seriously at Bitcoin.

"We're watching the birthing of a store of value," Jones said of the cryptocurrency.

But he said something else - something that speaks directly to the role the Lindy Effect is playing in the growing investor interest in Bitcoin.

"Every day that goes by that Bitcoin survives, the trust in it will go up," Jones said.

That's the Lindy Effect in action.

What Is the Lindy Effect?

The story behind the Lindy Effect is an unlikely one. According to Nassim Nicholas Taleb, who wrote a book called "Antifragile: Things That Gain from Disorder" that incorporates the Lindy Effect concept, it all started in a New York deli.

This particular deli - Lindy's - had become a favorite haunt of Broadway actors. Naturally, there was a lot of "shop talk." And over time, the actors stumbled upon a heuristic: a show that lasted 100 days could be expected to last 100 more. A show that lasted 200 days was likely to last 200 more.

The Lindy Effect essentially states that the future life expectancy of a non-perishable thing, such as a technology, is proportional to its current age.

Bitcoin Master Class: Bitcoin's launching into a critical stage that could create billions in new wealth, and our Master Class offers access to everything you need to know to cash in. Watch now...

Taleb linked this to the notion of fragility. Events that cause disruption and stress will destroy fragile things, usually sooner rather than later.

But "antifragile" things survive such events. And the more "hits" a thing endures, the more it shows its ability to last.

In other words, the thing has "stood the test of time" - to borrow a common idiom.

Here's how this applies to Bitcoin...

Why Bitcoin Is Antifragile

Bitcoin has survived for nearly 12 years (its "birthday" is Jan. 3, 2009, the date the genesis block was created). If it were fragile, it would have disappeared long ago.

It's been a very, very challenging road.

Bitcoin has suffered through several catastrophic crashes. In 2012, when it was less than three years old, Bitcoin had two major crashes of 49% and 57%. In 2013, there were three crashes - one of which was 83%.

In early 2014, the primary Bitcoin exchange, Mt. Gox, collapsed. The exchange lost more than 744,000 bitcoins, including 624,400 bitcoins in customer accounts. Just one year earlier, it was by far the biggest Bitcoin exchange, serving as the conduit for 80% of Bitcoin trading.

In the years that followed, many other crypto exchanges were hacked and large amounts of Bitcoin and other cryptocurrencies were stolen.

In 2017, Bitcoin went on an incredible bull run to nearly $20,000. Then it crashed. Again. Over 12 months, it fell 83%. Investing gurus called Bitcoin a bubble that had burst and left it for dead.

And none of these events takes into consideration the constant attempts to hack into the system. Yes, many crypto exchanges have suffered security breaches. But the Bitcoin protocol itself has never been hacked.

And it's a big deal for Bitcoin.

If you're looking for a store of value, you want to know it's going to be around for the long term. Gold passed that test a long time ago. Humans have used gold as a store of value for at least 4,000 years.

Bitcoin is still proving itself. But in its relatively short life, it has endured the most brutal of tests.

And that's getting the attention of folks like Paul Tudor Jones.

How the Lindy Effect Gets Bitcoin to $1 Million

Bitcoin's ability to survive will give it the time it needs to realize its potential.

It could change how we think of money.

So far, Bitcoin has been something of a novelty, but as Jones pointed out, it's now evolving into a store of value - like gold.

Bitcoin enthusiasts see it evolving even past that, to a medium of exchange and then on to full global money. In fact, because it's decentralized and has supply capped at 21 million, Bitcoin would make an ideal reserve currency.

But to earn the trust needed for Bitcoin to fulfill that promise, it will need to survive quite a bit longer. The Lindy Effect suggests that it will.

Dan Held, the growth lead for crypto exchange Kraken, recently posted a chart on Twitter that illustrates this relationship.

So far, Bitcoin is right on track: 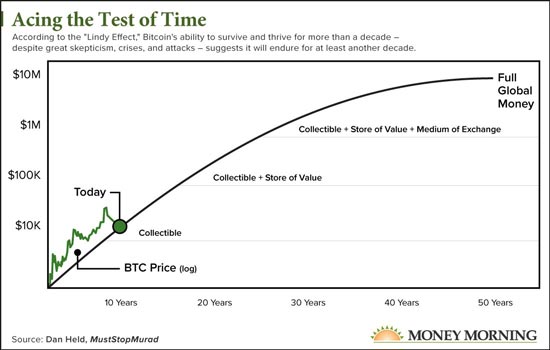 Bitcoiners will need to be patient, though. If this chart proves prescient, it will take a couple of decades for Bitcoin to achieve the trust and use needed to push prices close to $1 million.

In the meantime, I suspect they'll just continue to HODL.

Learn How You Could Become the Next Crypto Millionaire

Bitcoin's critical "expansion phase" is expected to create billions in new wealth - and our Bitcoin Master Class could be your ticket to cashing in.

Get access to profit tips and strategies from one of Bitcoin's earliest backers: how to buy and sell, avoiding fees and commissions... and, best of all, how to trade cryptocurrencies every day for the potential to make huge gains.