So this is unprecedented, alright. Certainly in my lifetime, probably yours, too - if you're younger than 102.

And when savvy investors like us take advantage of such an opportunity at the right time, we can be sure to grab a hefty share of those profits...

You can collect four separate paydays in under a minute with this options trading secret. Click here now to learn more...

And just like any other pent-up demand scenario, once the coronavirus is contained - likely sometime in early 2021 - there will be a deafening whooshing sound as sports come back and money is poured back into this multibillion-dollar industry.

I'm talking about media companies like Walt Disney Co. (NYSE: DIS) - it owns the ESPN network. I'm talking about AT&T Inc. (NYSE: T), which owns sports broadcaster Warner Media. Both are cheap now, and they should skyrocket pretty much the second sports go back to a regular schedule.

In fact, Under Armour is the perfect place to start... 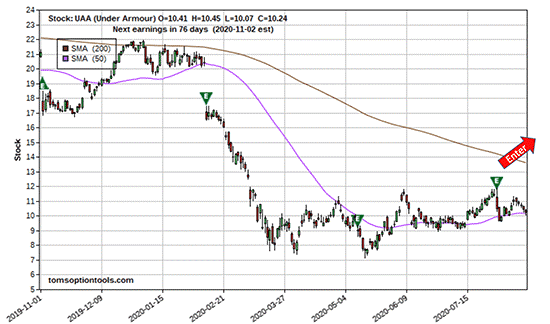 Once UAA breaks above the brown line - its 200-day moving average - traders can expect it to return to prior highs as shown by the graph above.

So the upside in these stocks is pretty incredible, but there's more...

There's even more money to be made as these stocks head lower - a very real possibility, given what's probably going to be the impending cancellation of NCAA sports.

If you have a longer time horizon for the drop... simply buy more time. You can trade DIS stock with long-term equity anticipation securities (LEAPS) that expire as late as June 2022.

Put options profit if the underlying stock goes down - giving you unlimited profit to the downside. If the stock goes up, the risk is limited to the cost of the option.

It's easy to learn how to use - all it takes is a few mouse clicks, and you could potentially be hundreds, even thousands richer in weeks. Check this out here...