Like "jet packs" and "flying cars," a frictionless future without physical money has been a staple of pundits' and authors' sci-fi speculations since the first ATMs were installed in 1969.

It seems this possible future has been "just around the corner" for at least 50 years or so - and certainly since I began my Silicon Valley career in the 1980s. It ebbs and flows in the popular consciousness with every financial technology, or "fintech," innovation.

However, the fact remains: In 2020, cash is clearly still very important to Americans' everyday lives. According to Federal Reserve numbers, while 86% of people report using "plastic" at least sometimes, nearly 13% of economic activity in the United States is still in cash.

That's roughly $2.7 trillion dollars and, in a very real way, it's "money on the table" for the fintech innovators I'm going to tell you about in a moment. Traditional credit card companies and banks haven't shown much interest in going after it.

But there's a company I know with the vision to see this as a $2.7 trillion opportunity for the taking. This firm is executing on its plans to supplant the physical money we use for small, everyday transactions.

And you can buy the stock today - no need to wait for "just around the corner" to arrive. If anyone is going to deliver the convenient, cashless future we've been hearing about for decades, it'll be these folks...

How This Company Gets to $3 Trillion and Beyond

If the words "innovation" and "vision" didn't give it away, I'm talking about Apple Inc. (NASDAQ: AAPL) - yes, that Apple. The most valuable single company on the planet.

Sure, it's sold nearly 2 billion iPhones since launch, but this is a company led by true visionaries.

And visionaries are never satisfied - especially with tech. For folks like Apple founder Steve Jobs and current CEO Tim Cook, it's practically bred in the bone.

It's a company I've recommended time and time again, and it's never disappointed - doubling our money in the last year alone.

Analysts on TV fret over every minute fluctuation in Apple's iconic iPhone sales every quarter, but they're looking in the wrong place.

The iPhone is still very important - and could become more so with the 5G model on the horizon - but Apple's "Apple Pay" fintech and its other innovations have, to keen observers, become bigger and, indeed, more important contributors to Apple's bottom line since about 2014.

Apple-watchers like me were excited earlier this month when the company spent $100 million to acquire a small startup called Mobeewave. It didn't generate many headlines at the time, but, in my view, this is a critical step on the road to another trillion in Apple's market cap.

It's tough to overstate how important this acquisition is.

I Have Seen the Future, and It Is Touchless

The Mobeewave tech Apple now owns specializes in something called near-field communication (NFC). NFC is a set of communications protocols that two electronic devices can use to talk over a distance of just 1.5 inches or less.

It has an array of applications - it can be used for identification and authentication and keyless entry, for instance.

But perhaps its biggest and most important application is in the growing field of "contactless payments."

Contactless payments are coming of age at an interesting time: a global novel coronavirus pandemic.

If you're like most people these days, "contact" has been uppermost on your mind. Think about it: With cash, there's the need for two people to handle money that countless others have probably handled. Even credit or debit cards require you to touch the public card terminal.

Plenty of people find this unsettling during this time of COVID-19. But with NFC, there's no need for touching. I currently use it wherever and whenever it's possible to do so.

A great deal of that business will go to companies like Apple and Square Inc. (NYSE: SQ), which pioneered the shift away from point-of-sale (POS) terminals and put virtual cash registers in everyone's pockets. Here's why I think that's so.

Next time you're in a store and ready to check out, take a good look at the payment terminal. It's very likely you'll see this icon: 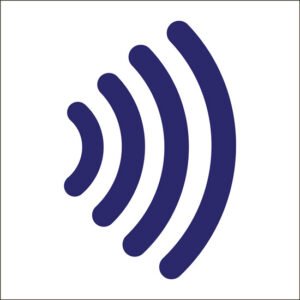 That's your confirmation that the store is set up for contactless payments; you can simply hold your card near the terminal, and NFC will facilitate the transaction.

Frankly, I'm surprised that these aren't everywhere yet... but that's what creates the upside potential for contactless payment companies. A recent study by Visa Inc. (NYSE: V), conducted during the pandemic, revealed the unsurprising result that two of every three American consumers would now prefer contactless, cashless transactions.

It's clear to me that these consumers and the businesses that serve them will practically beat a path to Apple's door.

I've pinpointed 20 stocks I believe could triple or even quadruple your stake in a year as one of the most groundbreaking tech advances of our lives becomes a reality...

I'm talking about 5G, of course.

Now, unlike my recommendation today, these firms are not household names or even big companies. Some are so obscure that few people outside Silicon Valley know them.

Nevertheless, they have the potential to deliver up to 1,000% windfalls in a year's time for those who get in on the ground floor.

Click here to learn how to get their names...