Should we be excited that Tesla stock split 5 for 1?

If you drop a cookie on the floor and it breaks into five pieces, do you get excited because you now have five cookies? 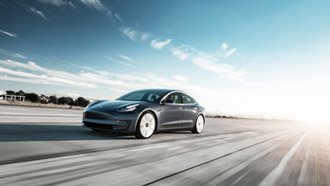 A stock split does not change the value of the company. The bottom-line profit numbers do not change. You just use a higher number to calculate earnings per share.

The total equity value of the company does not change by so much as a nickel.

The split itself does not change the total market capitalization.

So, what should investors be doing right now?

Breaking Down the Tesla Stock Split

Uninformed traders who think Tesla stock is now cheaper because the price declined might change the cap a little.

Stock splits were far more important back in the days when trading less than 100 shares – an odd lot – was more expensive than a round lot. Since most brokerages do not charge commissions and many allow fractional purchases today, stock splits are just a headline generator.

A better argument might ask, "Should you buy Tesla for any reason?"

That argument has been raging for some time now. So far, the bulls are mauling the bears. Tesla is a ten-bagger in the last year.

It is not just retail hot money and Robinhood running the stock up. It takes some serious firepower to push a company from a $9 billion market cap to over $90 billion in just one year. That's not a bunch of college kids trading their betting money.

That's high net worth investors, hedge funds, and other large institutions piling into the stock on a regular basis.

That's also a lot of desperate short sellers willing to pay any price to get out and make the pain stop.

The bears point out that Tesla is incredibly expensive on a valuation basis. That's true.

It has been true for years now.

But how expensive is it?

For the value of Tesla, you can buy Ford Motor Co. (NYSE: F), General Motors Co. (NYSE: GM) and Fiat Chrysler Automobiles NV (NASDAQ: FCAU), and still have a couple of billion left over.

The competition is also heating up in electric vehicles. Several groups are working in driverless cars, and some may well be ahead of Tesla right now.

Everybody seems to own the stock form Goldman Sachs Group Inc. (NYSE: GS) and BlackRock Inc. (NYSE: BLK) all the way down to the newest Robinhood traders. The enthusiasm seems to have reached the level of Joe Kennedy's shoeshine boy right before the crash of 1927.

The bear case is compelling and has been for several years now. During this period, being short the stock has been as painful as being punched in the face by Mike Tyson in his prime.

The bull case is simple.

Tesla is changing the automotive industry and is the early leader in electric cars. Many expect it to be the first to develop the driverless car. According to the analysts, sales and earnings are growing at a very high rate, and there is no end in sight.

As bullish as the analysts may be with their earnings expectations, Tesla routinely exceeds the consensus estimate significantly.

Then there is the Elon Musk factor. He is controversial, to be sure. But his fans are passionate. He has accomplished amazing things in the auto industry, the solar industry, and the space business.

If you have watched one of his rocket boosters launch a capsule into space and then return to land on a barge, you have to admit this guy has changed the world.

At this point, Tesla is the ultimate momentum stock. It is one of the most extraordinary momentum plays you will ever see. If you choose to ride the wave, be aware that you will make money until the ride comes to a quick stop.

If history is any guide, the carnage after that could be epic.

Also, be aware that the statement could have been made last year right before the stock went up by a factor of 10.

The question is, how much pain can you stand, and how much money can you afford to lose before that day arrives?

The truth is, there are less-risky, more profitable trades out there right now. It's just a matter of finding the right ones…

Three Stocks Even Better Than Tesla