A 31% drop on the S&P 500 gave many businesses a dim outlook in March. The IPO market slowed down tremendously as a result.

What didn't slow down, however, was online delivery. An unprecedented amount of online orders were being placed during lockdowns. Amazon had to hire 75,000 more workers to meet new demand. 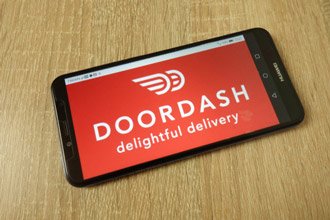 As part of this trend, people were also eating out far less (if at all). And companies like DoorDash came to the rescue.

That's why this company hasn't had the same hiccup as the rest of the IPO investing market since it announced a potential IPO in February. Now, a DoorDash IPO is imminent as the company maintains its goal of going public before the end of Q4.

DoorDash joins a flood of other tech IPO announcements this fall, including Snowflake, Sumo Logic, Unity, Asana, JFrog, and Palantir.

But should you invest in the DoorDash IPO? Some things to keep in mind before you do...

The service is available in 850 cities across America, as well cities in Canada and soon Australia.

According to Second Measure, an analytics firm, DoorDash controlled 45% of the food delivery app market in June. UberEats was behind that at just 24%. Postmates came in third with an 8% share.

5G Stock to Buy: This company is the best way to cash in on 5G, and it’s flying under the radar – for now. Get in before the share price surge – access this pick for free here.

Yes, it is promising to see such a steep differential between DoorDash and its competitors. Part of what separates it is the fact that it isn't sales-driven like GrubHub.

It also helps DoorDash's reach into places outside cities, where GrubHub might have a harder time.

However, there is still a measure of caution required for anyone thinking about investing in the DoorDash IPO....

DoorDash is not yet profitable.

Still, DoorDash raised $400 million from investors in June, putting to bed any concerns that it might not follow through with an IPO.

Today, the company is valued at $16 billion.

Much of what has been released looks good on paper. But much is still unknown.

DoorDash filed privately with the U.S. Securities and Exchange Commission, so it wouldn't have to unveil certain financial information right away.

Companies file privately like this to keep faith in their investors and "test the waters" before an IPO.

IPOs rely on investor hype leading to the event. Any information unveiled prematurely could cause the company to tank, like WeWork did when questions were raised about its operations.

All investors have to go on right now is that CEO Tony Xu is hopeful about profitability in the near future.

Although profits are uncertain as of yet, that's quite normal for new companies like this.

But does that mean you should invest in DoorDash?

Should You Invest in the DoorDash IPO?

The DoorDash IPO date is expected to be before the end of the year.

It's drawn a lot of excitement. But there are still some concerns for investors.

This company is still growing. And it's growing in an industry that is still getting sorted out.

DoorDash took a bigger bite of the industry when it bought Caviar last year for $410 million. Now, it's also in talks with Uber about a possible merger.

This sounds like good news ahead for DoorDash. But it also means the fate of the industry is somewhat unpredictable.

With so many potential mergers and acquisitions, it's anybody's guess who will land where.

This situation is easily comparable to DoorDash's gig economy cousins, Lyft Inc. (NASDAQ: LYFT) and Uber. They've been engaged in a price war that's driven their stock prices down significantly on the year.

For that reason, IPO investors should always know what they're getting into. IPOs can be lucrative and exciting. But excitement also has its downside if it artificially inflates the stock price.

DoorDash similarly faces competition from Uber and Postmates. The good news is that it has a commanding lead of the $35.7 billion food delivery market so far.

Of course, this can change in an instant. So before you decide to invest in DoorDash, you want to make sure you have a clear financial picture of the company and the industry.

Until then, you're left with a decision.

You can wait for a clearer picture of how Wall Street values this stock. Or you could take action on stocks that are already public...

Three Stocks Even Better Than DoorDash