This is my kind of "Knight's Tale"(and it's one that can make you rich...)

His name was William O'Shaughnessy, he was born in 1809, and he was a true Victorian Era Renaissance Man.

He pioneered use of the telegraph... experimented with color photography... sparked research into intravenous therapies... and discovered the importance of electrolytes (Gatorade anyone?) to human health.

But this Irish knight was destined for an even greater achievement: He got Western medicine to acknowledge the importance of cannabis to human health.

O'Shaughnessy earned his MD from the University of Edinburgh in 1829, then immigrated to India, where he saw firsthand how Cannabis Indica was employed as folk medicine for treating arthritis and spasms in infants. 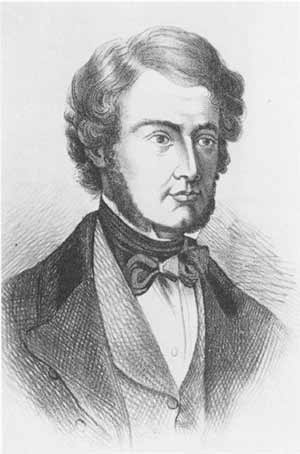 He went on to develop cannabis as a treatment for spasticity in general. He used cannabis resin to treat the wrenching muscle spasms for patients suffering from rabies and tetanus.

With his return to England in 1841, O'Shaughnessy became an evangelist for medical cannabis: He started to publish his research. And doctors throughout the West - including those here in America - incorporated marijuana into their treatment regimens.

By 1850, Americans could find cannabis in medical preparations in pharmacies across the United States.

Indeed, in the decades that followed, cannabis became a common, readily accepted therapy.

Then came "Reefer Madness," the 1936 exploitation flick that supercharged what had been a slowly growing, anti-cannabis sentiment - demonizing it as the "Marijuana Menace" and setting the stage for seven-plus decades of regulation, politicization, and criminalization.

As a guy who spent 26 years in the world of finance and investment banking, I can tell you that big shifts in innovation and legalization fueled by billions in new money flows have blasted open the biggest wealth window I've seen in decades.

Now my "Knight's Tale"is getting a good old "reboot." Its next chapter includes two of my favorite opportunities:

Let me show you exactly what I mean...

As Cheap as They've Been in Years

For folks who point to the "pot stocks wipeout" of 2019 as a reason to completely avoid the sector, I counter with this: Look at the "Knight's Tale." The saga of cannabis is a story of cycles - in favor then out of favor, only to return to favor anew.

William O'Shaughnessy helped bring cannabis into favor - spawning a cycle of acceptance and bullishness that lasted from 1850 well into the 1930s. Then came the equivalent of the "Cannabis Dark Ages" - a down-cycle that put marijuana out of favor for the next 60 years.

The new "upcycle" began in 1994. That's when California state legislators passed a bill legalizing cannabis for medical use.

But California Gov. Pete Wilson shot it down by veto.

Fed up with asking permission from politicians, cannabis advocates said "to heck with it."

Those new knights of cannabis took a ballot initiative directly to voters. And on Nov. 5, 1996, the Compassionate Use Act became law - meaning cannabis was legal medicine once again.

By 2000, another seven states had passed medical cannabis laws - and only one was passed by legislators. By now, it was clear that bottom-up, direct initiatives from citizens was the best way for people to get what they wanted.

And that movement has put legal cannabis within reach of 97% of the population.

Today, 46 states (plus the District of Columbia) have laws that allow for the sale of cannabis.

Then came the great cannabis stock wipeout - a "down-cycle" move that put marijuana investments out of favor once again.

As someone who's watched this sector for a long, long time, let me share my view.

All that sell-off really did was make cannabis stocks cheap (and I mean "bargain" cheap). The industry's still growing. New catalysts are emerging.

Indeed, the next "up-cycle" will be a true boom. In fact, that boom is already here - and it's one you don't want to miss. (Just look at the trillions in wealth created since that you'd have missed had you stepped away from - and forever stayed out of - tech stocks after the dot-com debacle.)

A wave of cannabis wealth is being created - and you don't want to miss it. While other investors dither with indecision, you can act.

And you want to act now.

Having embraced medical cannabis, states are primed to take the next step, a move that will cause the cannabis market to double - two times over - in the next three years.

And that's happening at a time when cannabis stocks are as cheap (on a valuation basis) as they've been in years.

We've talked quite a bit about how medical innovation is driving the cannabis market. And make no mistake: That medical catalyst is huge. Indeed, just the growing demand for medicinal marijuana and related cannabis products is causing the overall market grow at a hefty 35% a year.

But as big and promising as the medical cannabis market looks to be, the recreational market is even bigger.

And this whole medical-to-rec transition is just getting started.

Of the 46 states that have legalized marijuana sales, only 12 of those states, plus D.C., have gone fully recreational - meaning they allow sales to all adults.

Right now, the U.S. medical market is worth about $15 billion. Even with mostly medical sales, the legal cannabis market has managed to grow at about 35% per year.

But "going rec" is the so-called "X-Factor." That could rev up the annual growth rate to 45%.

And 45% sales growth means the market doubles twice over the next three years - and maybe five-fold by 2024.

Wall Street is massively underestimating the potential here: An investment bank report I saw a few months back predicted that the U.S. cannabis market would get to $85 billion by 2030.

I see that happening much, much faster. The "growth accelerator" I just described will bring the U.S. cannabis market to $66 billion in a bit more than four years.

With so much to gain, the progression from medical to rec is irresistible.

Here's how we're going to ride that wave ...

Thanks to a recent acquisition, Curaleaf Holdings Inc. (OTCMKTS: CURLF) is now the biggest cannabis company in the world.

It's also one of my top long-term picks. 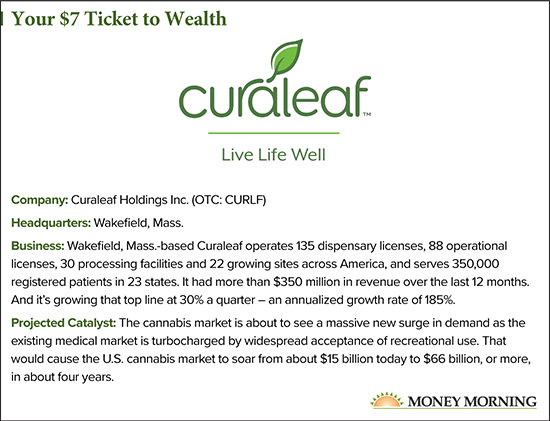 The Wakefield, Mass.-based Curaleaf operates 135 dispensary licenses, 88 operational licenses, 30 processing facilities, and 22 growing sites across America, and it serves 350,000 registered patients in 23 states. It had more than $350 million in revenue over the last 12 months. And it's growing that top line at 30% a quarter - an annualized growth rate of 185%.

Curaleaf's buyout of GR Cos. Inc. (better-known as Grassroots), which closed back in July, was a bold move. It vaulted the firm into the No. 1 spot, launching it past well-known cannabis behemoths like Canopy Growth Corp. (NYSE: CGC) and Aurora Cannabis Inc. (NYSE: ACB).

It's a stock you want to buy and hold onto for the next few years - even adding to your stake on pullbacks.

I love this stock.

As great an opportunity as stocks offer, private-equity investments are even better - offering returns that can be 10, 20, or even 30 times greater than stocks. You're actually getting in on the ground floor of a new company - and you profit with other "insiders" when that venture goes public or is bought out by a deep-pocketed suitor.
My other top pick right now is just such a venture. It's a privately held startup that's working to bring 27 cannabis-based therapies to market.

And it's a company I know very well, since I've been working with the management team for over 10 months as they get their innovations up and running.

It's a great story.

And it's one I'm going to tell you right here...