While it's impossible to know who will win the White House in November, investors should be thinking now about the best stocks to buy for each scenario. 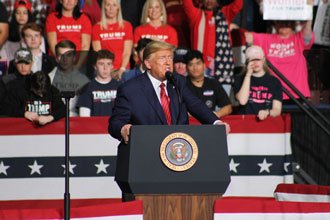 And as we noted last week, most forecast models predict a Biden win right now.

But others say President Trump sill has a good chance of getting reelected.

Marko Kolanovic, a quantitative strategist at JPMorgan Chase & Co. (NYSE: JPM), told investors in a late August research note not to dismiss the possibility of a Trump win.

"We currently believe that momentum in favor of Trump will continue, while most investors are still positioned for a Biden win," Kolanovic said.

Kolanovic warned investors of the fallibility of polls. He pointed to research that suggested one out of 10 Trump voters are not honest with polltakers.

This is what happened in 2016. Pollsters so consistently underestimated Trump's support that I used the data to predict he'd win in May. So take the current RealClearPolitics average, which has Biden with a 7.5% lead, with a big grain of salt.

We'll take a look here at what investors can expect if Trump wins a second term. And along the way, we'll give you the best stocks to buy, courtesy of Money Morning Chief Investment Strategist Shah Gilani...

The Best Stocks to Buy If Trump Wins

During the Republican National Convention, the GOP chose to simply recycle its 2016 platform and voted to "support the president's America-first agenda."

In his acceptance speech, President Trump offered a few dozen goals for his second term, which were also posted on the official Trump campaign website.

Trump's proposals are nowhere near as detailed as Biden's. But we do have a sort of "cheat sheet" in that they're mostly the same policies he's pursued for the past four years. We already know the impact of those policies on the markets.

We also know that Trump loves to see record highs in the stock market. In his first term, he has pushed for stimulus packages as well as looser Fed monetary policy to spur the market to new highs. He'll stay focused on stock prices in a second term.

Let's go through the Trump proposals most relevant to investors:

The Tax Foundation estimates that real disposable income rose by an average of $5,000 per household since the TCJA went into effect. The economy also added about 6 million jobs, although that gain was more than wiped out by the impact of the pandemic. It likely also played a role in stocks reaching all-time highs earlier this year.

Biden has talked of repealing the TCJA (though the Democrats have backtracked on this of late) and wants to raise taxes on the wealthy as well as corporations. Trump wants to cut taxes further and give tax credits to companies as an incentive for moving manufacturing jobs back to the United States.

While pulling the U.S. military mostly out of the Middle East would hurt defense spending - America has spent $6.4 trillion on wars in the Middle East and Asia since 2001 - Trump is still likely to boost spending on defense, space, and tech.

His campaign website talks of "winning the race to 5G." Trump also touts space initiatives, such as going to Mars and establishing a permanent presence on the moon.

Gilani sees defense spending rising under Trump - and all the more so if Republicans win both houses of Congress (not likely, but possible).

One of the best stocks to buy here, he said, is Lockheed Martin Corp. (NYSE: LMT).

"Lockheed's an aerospace and defense 'blue chip,' meaning it's considered cream of the crop when it comes to the sector," Gilani said. "In fact, Lockheed will do well regardless of who wins in November. But it will do better if Republicans rule Washington."

Trump promised to get tough on China when he was campaigning in 2016 - and has done just that. While his trade war with China has had mixed results, there's no doubt a second Trump administration would keep the heat on America's Asian rival.

U.S. multinational companies that do a lot of business in China, particularly in the tech, fast food, and auto sectors, could get caught in the crossfire of an ongoing trade war.

Trump's website promises "no federal contracts for companies who outsource to China." That covers a lot of big firms, including IBM Corp. (NYSE: IBM) and The Boeing Co. (NYSE: BA).

And then there's China-based companies that trade on U.S. exchanges like Alibaba Group Holding Ltd. (NYSE: BABA) and JD.com Inc. (NASDAQ: JD). Just this year, Trump proposed delisting from U.S. exchanges any Chinese company that refuses to comply with U.S. accounting standards by 2022.

Both candidates agree on the urgent need for infrastructure spending.

"No matter who wins in November, investors should count on increased federal spending generally, including an infrastructure bill right away in 2021," Gilani said.

"Summit supplies building materials - specifically asphalt, cement, and ready-mix concrete - to the construction industry. The company supplements its robust materials business with services, including paving and trucking," he said.

Given that both parties favor rebuilding the nation's infrastructure, Gilani says Summit is a stock to buy now.

A Trump presidency might hit the healthcare sector harder than a Biden presidency.

Like Biden, Trump wants to go after Big Pharma. So the drugmakers are clearly in the crosshairs for the next four years.

That would leave health insurers with less income and higher payouts - a bad combination for their bottom line.

As is often the case with Trump, his positions here are somewhat inconsistent. "Energy independence" to Trump has meant policies that support the fossil fuel industry. But he also says he wants clean water and clean air.

It's hard to say how much climate change stocks would benefit from a second Trump term, but we do know where he stands on fossil fuels.

And one of the best stocks to buy to play the beaten-down energy sector in the event of a Trump win is Exxon Mobil Corp. (NYSE: XOM).

"XOM is trading at prices first seen 20 years ago and sports a dividend yield of more than 8%," Gilani said. "Just as we saw with tobacco stocks, industries drifting toward measured declines - like fossil fuels - can make solid investments if bought at the right prices."

And If Trump Loses... Brace Yourself

Finally, we need to mention the threat to stocks a Trump defeat poses. The probability of a contested election in the event Trump loses is very high. And that would be bad for stocks, at least for as long as the legal wrangling lasts.

Trump has set the stage for a challenge by saying over and over that widespread voting by mail will lead to a "rigged election" and "massive fraud."

The legal battle lasted from the day after the election, Nov. 8, until Dec. 12, when the Supreme Court decided in favor of Bush. But stocks kept falling until Dec. 18 - the day the electors voted to make the results official (there was lingering concern "faithless electors" might try to elect Gore).

The good news is that any pullback likely would be short-lived. So unless you're making short-term trades (such as options), you should be OK just waiting it out.