The streaming wars are raging, and investors are starting to sense the opportunity behind this exciting trend. 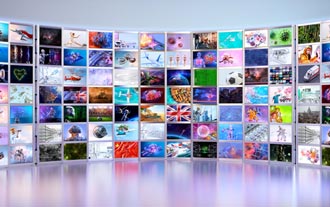 Will Disney Plus take away business from Netflix? Will Apple put more weight behind Apple TV Plus? Does Comcast go all in on Peacock? I admit, I would like to know the answer to these questions, but without a crystal ball, no one can tell the future. But one thing I do know is that CTV is here to stay. It has been made clear by the companies I've just listed.

One company that I see profiting no matter who wins the streaming war is Trade Desk Inc. (NASDAQ: TTD).

See, almost every business in the world needs to advertise to sell their products. It's everywhere, from billboards to our social media stream, and from newspapers to TV. Everywhere we turn, we are likely to see advertisements, so it's no wonder $1.4 trillion was spent last year on advertising and marketing globally. In fact, every time you sit down to watch 30 minutes of TV, you get roughly six to seven minutes of commercials. That means 20% of your time is spent watching commercials that companies are paying a lot for and will continue to do so as a preferred way of advertising. Just imagine, during the Super Bowl, advertisers are spending an average of $5 million per ad.

This all adds up to an astounding $230 billion spent a year of TV advertising according to IDC.

That's why it makes sense to target a company essential to that as streaming services grow.

Just like businesses who sold picks and shovels to miners during the gold rush, the real money here is in profiting from the trend instead of trying to pick who will win the war...

The Pick-and-Shovel Play in the Streaming Wars

In Part 1 of our series on connected TV, we talked about Roku and how big the tailwind is with the shift from linear TV consumption to on-demand programming delivered though CTV. Audiences are increasingly accessing content via connected TV platforms like Apple TV, Roku Inc. (NASDAQ: ROKU), and Alphabet Inc.'s (NASDAQ: GOOGL) Google Chromecast, and there is no slowing down from here.

And with that, those ad dollars going to traditional TV are shifting to CTV and online video market.

This is where Trade Desk comes in. It operates a platform for purchasing ads in a digital format with a focus on CTV and video and helps advertisers move their spend from traditional TV to online.

Trade Desk doesn't create the ads; it works with both the creators and media companies to provide the platform for advertising campaigns. Similar to Roku, it is platform-neutral and works with all media companies. This means that it can serve ads on any CTV service whether it be on services like Disney's Hulu or NBCUniversal. This puts it in a unique position to capture a large percentage of advertising spend. Millions of viewers have already made the shift, and now advertising dollars are following.

Long have analysts predicted the death of linear TV even as cable companies continued to bring in billions in subscriber fees and advertising revenue, but this shift has hit a tipping point and advertising spend is moving quickly.

In fact, in Q2 2020, despite the impact from the pandemic, connected TV spend grew roughly 40% year over year for Trade Desk, and it expects Q3's growth rate will more than double Q2 to 80%.

I don't know many industries growing that fast.

Advertisers are starting to realize that as young consumers cut the cable that they may miss out on advertising to that demographic. This has already help shift $7 billion to CTV. While this is only a small fraction of the $230 billion, this just means we have the chance to get in early. The industry is still in its infancy, and with Trade Desk only valued at $20 billion, there is a lot more room to run.

There is a fundamental shift happening in advertising, and Trade Desk is capturing the new CTV market with its massive reach. It has access to over 80 million households and 120 million CTV devices. While sales growth did slow during the first two quarters of the year for its overall business due to the pandemic, this is only a bump in a road as it accesses the huge digital advertising addressable market. Even through the slower overall growth it has managed to stay profitable and has been since 2013. Over the last year, it has also managed to grow its cash and short-term investment position to $555 million and improve its free cash flow by over 2,500% in the last year, an impressive feat given the economy.

This is why I believe Trade Desk has set itself up for the future of TV.

This trend is creating opportunities for investors left and right, and the next company I'm covering is flying under the radar. Just like how Trade Desk can benefit from every service provider and advertiser making the switch online, this next company I'm looking at is a small provider looking to make a name for itself competing against the largest providers. It is just getting started and recently raised its subscriber guidance as fall sports start up.