Recently, I shared more than 10 low-risk, high-probability trades for cashing in on downside market volatility between now and November and even beyond. Almost all those trades target a double - or better - and none of them risk more than a few cents per share.

But it's easy to capture profits on "upside" volatility, too. To do that, I'm going to share one kind of trade to make on three different stocks. It's just as easy and low-risk as my other trades, but these guys all have a decidedly bullish attitude.

And they're short-term, too. You don't want to wait long to get into these.

Now, everyone knows I'm a rules-based trader, so of course I fed these through my proprietary Money Calendar.

I sure liked what I saw - one of these trades even paid off 100% of the time over the past 10 years.

I love going for coffee, even when I have to pick it up curbside. Nobody likes coffee better than me... except maybe millennials.

Every time I hit Starbucks Inc. (NASDAQ: SBUX) these days, there's always a socially-distanced crowd of young people. And it was like that before the pandemic, too. It seems like no matter how bad the economy gets, no matter how little money there is to go around, they've always got enough for a $5 latte.

You don't need Moody's to tell you what's going on here. This is one of those stocks where anyone can go out and just look at what's happening and feel good about going long. 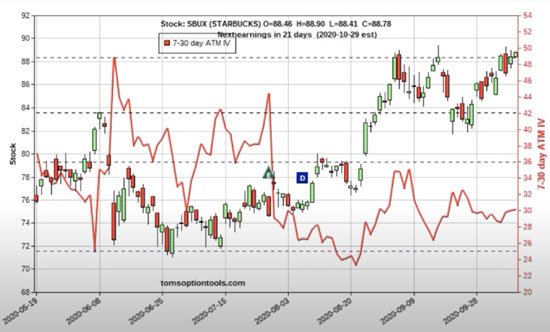 This stock bottomed out around $72 in June, but it started rising since then and hasn't looked back. It's trading above $90 right now, and it's not far from its 52-week high at $94.13.

If you look at the right-hand side of the chart above, you'll see a W-shaped "flag" forming up since September. That's a bullish flag, in fact, and it's telling me SBUX is on the way to $100 or more in the near term.

(That's almost as fast as this "fast money" strategy I've seen - click here to check it out.)

That's not just a hunch, either. I used the Money Calendar to look at Starbucks' seasonality over the past 10 years. For the period between Oct. 1 and Oct. 31, between 80% and 100% of long SBUX trades were winners.

That tells me with some confidence that this stock is going up. At-the-money (ATM) options premiums on this stock rose 17% between early October and the company's third-quarter earnings reports - I'll show you how to use this on SBUX and the other two stocks in a few minutes. Even on a buy-and-hold basis, this might be one of the best stocks to go long on in the market right now.

Papa John's International Inc. (NASDAQ: PZZA) is another stock that's not just surviving the pandemic era, but thriving in it. The eat-at-home trend has taken this stock from its March lows of around $35 to as high as $102 intraday.

LIGHTNING ROUND: Shah Gilani is about to rattle off 50 stocks to buy... or avoid like the plague. Click here to see it - and be ready to take notes...

But PZZA shares are a little different. They had a very successful second quarter, but then they pulled back in the September sell-off and stayed off their highs. Here's a shot of Papa John's right off my computer screen. 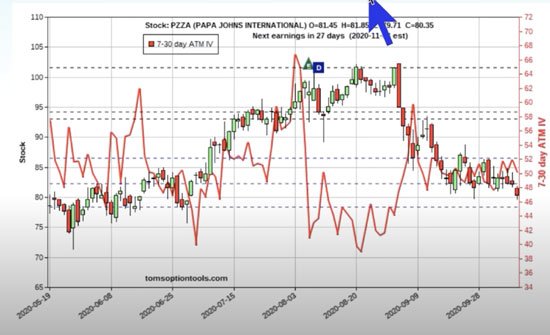 You can see on the screenshot that Papa John's has some strong, strong support at around $78 and $82, and its current share price of $80 is smack-dab in the middle - the sweet spot.

The Money Calendar shows that folks who got long on this stock before Oct. 22 and got out by mid-November had those long bets rewarded. In 2010, the stock traded flat for the month and in 2015 and 2017, the bulls lost money.

Papa John's third-quarter earnings will hit the street on Nov. 4 - the day after the election. History shows that the implied volatility on ATM Papa John's options could go up 22% until then. Even if PZZA shares rebound half the distance between here and its all-time highs, the right trade could pay off handsomely. More on that in a second.

Altria Inc. (NYSE: MO) rounds out my list. Smoking is falling out of favor here in the United States, but this company is still growing its business worldwide, particularly in Asia.

The tobacco company fell off its highs with nearly everything else in the September sell-off, but if you look at my screen, you'll see it's had consistent support in and around the $38 level. 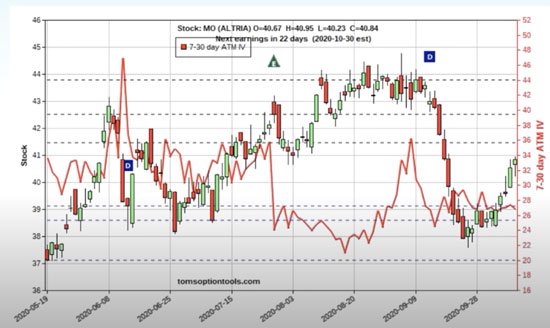 At the same time, it starts to run into resistance in the $44 region. Over the past few sessions, it's bounced back from that support level. At $40 a share right now, Altria's not quite halfway back up to that resistance level.

The Money Calendar shows that 70% to 80% of the time, a short-term, 13-day long play on Altria pays off. Altria's earnings are reported on Oct. 30, and the implied volatility of options goes up 10% on average between now and then.

So we've got three stocks with proven past performance, favorable technical setups, and strong seasonality going for them. There's one important thing left to talk about...

How to Profit on All Three of These Stocks

Each one of these three stocks would make a great buy-and-hold play for at least a few days until their earnings reports, and at least in Starbucks' case, maybe even longer.

LIKE GETTING PAID to buy stocks. This is an incredible phenomenon - twice it allowed investors who were in on the secret to picket thousands with just a few mouse clicks. You've got to see this...

But one thing they all have in common is a big increase in the implied volatility of their options in the run-up to their earnings announcement. That tells you that the options themselves will get more and more expensive the closer you get to earnings until the price falls off.

Now, if you're an experienced trader, you might consider fast-moving "iron condor" trades on some of these as we get even closer to earnings for each of them.

Otherwise, it couldn't be easier: Consider buying the shares and selling ATM covered calls for every 100 shares you own. Date the expiry according to the earnings date. You risk having the stock called away from you, but these are short-term holds anyway, and the premium you collect will make a nice "kicker" for the share price appreciation you're likely in for.

Now, each of these trades could pay off very quickly, right around Election Day or a little after, but sometimes profit potential can arrive even faster...

You see, you don't even have to wait until Nov. 3. I've found something I call the "Four-Day Profit Cycle," an extremely fast pattern that's outperformed the S&P 500 by nearly 17% in the first eight months of wild 2020.

And, yes, I said, "four days." Making these moves correctly could possibly double your money in 100 hours or less. This could be the fastest profit potential I've ever seen.

Click here to get my research into this unusual phenomenon...