Some of you might have seen this coming: If you've been following along with my colleague Michael A. Robinson's research, you've known about the extreme profit potential in the 5G rollout for a while now - maybe you've even had the chance to profit already.

But for most investors out there in the market, 5G just got real. Really real.

And for us, there are now even more ways to profit.

Apple Inc. (NASDAQ: AAPL) unveiled its latest iPhone, the iPhone 12, and it's packed with tech to enable it to leverage 5G to the fullest extent. It's got to be one of the speediest smartphones on the market.

What was even cooler was, over the 70-minute online event this past Tuesday, each of the 11 new iPhone product features generated a different reaction in AAPL shares. The Apple stock show was almost as exciting as the Apple product show - and I'll show you how cool that looked in a just a second.

Those moves in the stock happened in seconds and minutes, but there's another, longer-term pattern playing out in Apple that I think is good for a 233% profit...

Apple and 5G - a Money-Tripling Combo

Being a $2 trillion company that makes cultural icons has its perks. Other companies have released a few 5G-capable handsets, but none so far have made the splash the iPhone 12 has.

Apple is ready to go, so now the ball is in the telecom providers' court. Companies like Verizon Communications Inc. (NYSE: VZ), AT&T Inc. (NYSE: T), and T-Mobile U.S. Inc. (NASDAQ: TMUS) need to pour on the hustle to complete the nationwide 5G buildout. Apple CEO Tim Cook even introduced 5G leader Verizon's CEO Hans Vestberg to put his fingerprints on the promise.

INSTANT PAYDAY POTENTIAL: This strategy can help get you into stocks you want to own at a major discount. It can even let you collect an upfront payment. I'll walk you through step-by-step; just click here.

And there's a lot more going on in the iPhone 12 than 5G. It'll be faster, thinner, smaller, and lighter with a better camera, edge to edge display, and - as those of you with constantly cracked iPhone screens will love - a ceramic shield. There's even going to be connectivity with a new Homepod Mini.

Now, about those real-time market reactions I mentioned - check out this chart of AAPL shares as the event was playing out...

I thought that was awesome to watch.

Clearly, investors are most excited about the unit's 5G potential, and I can't say that I blame them. But then again, investors are almost always excited by the features unveiled in these events - events Apple has staged since the company was founded in the late 1970s.

Look at this stock pattern overlaid with Apple product launches over the past 10 years... 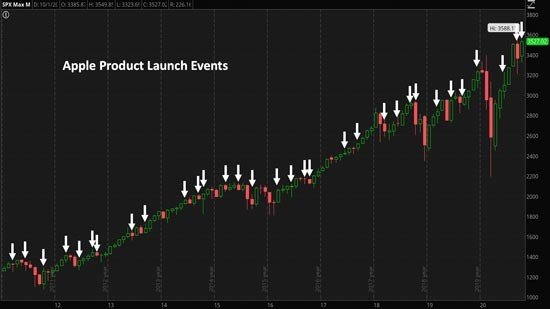 Now, looking at this monthly Apple chart, there's only one clear pattern. And it's not that Apple goes up or down after these events. In fact, buying before and/or buying after and selling a month or two later is essentially a wash.

Instead, only one thing is abundantly clear in the above chart. These product launch events are everywhere on Apple's rise to a $2 trillion market cap.

So, here's the pattern: Apple goes up over the long term, and these product events are a major catalyst. That means Apple's future is only going one direction: up. And to play that future, you should take a look at long-term call options.

But that still leaves us with a familiar, tricky problem. Apple's pricey, and, as we all know, I hate to make an expensive trade. As a rule, expensive stocks have expensive options. As I'm typing this, it's sitting just under $120 a share.

OPTIONS 101: You can click right here to get my FREE "Beginners' course" on how to trade AAPL, TSLA, or pretty much any stock you can think of.

This situation calls for a long call spread or, as my paid subscribers would call it, a bullish loophole trade. As a refresher, this trade consists of two options; you're buying on call with a lower strike, paying a premium, and selling another call with a higher strike and collecting the premium, which will offset your costs.

Not including commissions and fees, this bullish loophole (or long call spread) will cost you just $6, or $600 for control over 100 shares of Apple. Buying 100 shares of stock outright would cost you nearly 12 grand!

For the money at risk, you have the opportunity to make $1,400 between now and late January 2022 on a stock that's one of the most bullish in history.

Now, this is a great, low-cost, long-term play on Apple, but, like the chart above shows, sometimes stocks move much more quickly than that...

In the meantime, don't miss out on what could be the fastest money I've ever seen...

You see, my team and I have just finished up some research into what I'm calling the "Four-Day Profit Cycle."

It's an extremely quick pattern that's even outperformed the S&P 500 by close to 17%, even in a wild, volatile, bullish year like 2020.

Moving on this pattern and its moves correctly could possibly double your money. Like I said, it very well could be the fastest profit potential I've ever seen. Click here to see my research...