We're less than two weeks from the Nov. 3 presidential election, and the polls are gaining clarity. Democrats are going into next month's election with a clear advantage.

And according to Real Clear Politics, betting sites on average give Biden odds of 65.1% to win.

Meanwhile, Democrats are practically guaranteed to keep control of the House of Representatives, and now have a 70% chance of taking the Senate, too, according to FiveThirtyEight.

In short, the polls say we're going to get a "blue wave." Democrats are set to take the White House and both houses of Congress.

Of course the polls have been very wrong before, so we have to remind ourselves that they tell us probabilities, not certainties…

But if the "blue team" does win, that's going to mean a different take on green energy, stimulus, anti-trust, banking and environmental regulations, and much more. Stocks will definitely be affected.

So today, I'll show you how to prepare your portfolio for a "blue wave" as well as what to do if the polls end up being wrong again…

Markets Are Already Pricing in a "Blue Wave"

Probably the two largest differences we'd see with a "blue wave," compared to the present situation, would be on stimulus and energy policy.

This would mean more spending money for Americans in the short term, but without the aid to businesses that Republicans have been focused on. Sectors that have been shut down because of COVID-19 would keep struggling.

Airlines, cruise lines, movie theaters, and so on would likely take a hit. Fast food chains such as McDonald's Corp. (NYSE: MCD), Domino's Pizza Inc. (NYSE: DPZ), and Shake Shack Inc. (NYSE: SHAK) that do well with drive-throughs or delivery would benefit from more cash in people's pockets.

On energy policy, Biden has campaigned on a huge investment in green energy. As you'd expect, this would drive up the demand for solar panels, wind turbines, batteries, and electric cars.

But as you can see in this chart, the Invesco Solar ETF (NYSEArca: TAN), in blue, has vastly outperformed the Energy Select Sector SPDR Fund (NYSEArca: XLE) ETF, in red, since August: 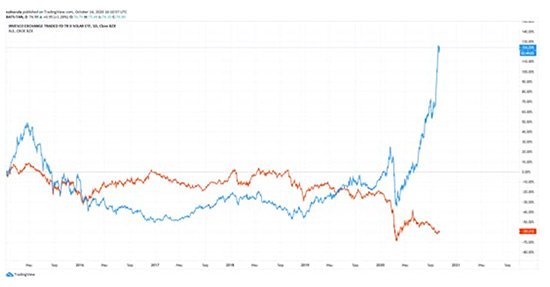 While XLE invests mostly in oil and gas companies, TAN invests in companies that make solar panels and other related equipment.

TAN's recent skyrocketing is in line with investors and traders becoming increasingly convinced that Biden will become president and the Democrats will be able to push through their energy policy.

There are many solar stocks that have soared – and two that I still like are NextEra Energy, Inc. (NYSE: NEE) and Canadian Solar Inc. (NASDAQ: CSIQ).

NEE has both a regulated utility side and an unregulated side that is the U.S.'s largest producer of renewable power. So it's a solid stock that gives you exposure to the green movement, while throwing off a 2% dividend to boot.

CSIQ is a solid pure-play solar company with roots in Canada – and importantly, subsidiaries in 20 other countries. Unlike many other solar companies with outrageous valuations, CSIQ has a profit/earnings ratio below 10.

TAN may still be a good investment, after it gets a chance to settle down a bit. However, there's another way to play this solar boom that hasn't taken off yet.

According to Goldman Sachs Group Inc. (NYSE: GS), investment in solar power alone accounts for about 18% of the industrial demand for silver, or about 10% of total silver demand.

In other words, a solar power build-out will mean an increase in silver prices. And because the expected increase in solar panel demand under a Biden administration is so large, silver prices should move up even as technology reduces the amount of silver used in each individual panel.

So far, the markets do not seem to have latched onto this. Here's the same chart as before, but with the iShares Silver Trust (NYSEArca: SLV), which tracks silver prices, in light blue:

As you can see, silver went along for part of solar energy's run-up, but then took a break.

This discrepancy provides a good time to get in on SLV before it plays catch-up with TAN.

While both Biden and Trump are in favor of infrastructure spending, the Trump White House has had no luck getting anything like it through Congress.

With the White House and Congress both in Democratic hands, the chances of an infrastructure bill becoming law would be much higher. Construction materials companies such as Vulcan Materials Co. (NYSE: VMC), Granite Construction Inc. (NYSE: GVA), or Martin Marletta Materials Inc. (NYSE: MLM) stand to benefit.

Of course, the polls put Trump's chances of winning back in 2016 as quite low, too. And he ended up winning anyway.

While pollsters claim to have accounted for that since, and while the 2018 midterm polling was more accurate, a surprise Trump victory is quite possible. The "red team" still holds out the very real hope that their silent supporters – those who are notoriously difficult to poll – could bring home another Republican victory.

A mixed outcome is also a possibility with Biden taking the White House, but the Republicans keeping the Senate, albeit with a slimmer margin.

Either way, that would mean some very different things for stocks…

Trump's Won as an Underdog Before

A Trump reelection or a Republican Senate is likely to have four main outcomes for stocks.

First, banking regulations would continue to be reduced, and perhaps get even looser. Under Democratic control, on the other hand, banks would likely face more regulation, including at the very least a return to post-2008 regulations.

In addition, a second Trump term, as well as a Republican majority in the Senate, would continue to protect the oil and gas industry from regulations, whereas Democrats would push for more regulation as part of their green energy policy.

So a Republican win could reverse the dynamic you saw above, where the oil and gas-heavy XLE ETF is down while the solar-heavy TAN ETF is soaring.

Finally, both pharmaceutical stocks and Big Tech companies are likely to face much more scrutiny and regulation under a Democratic Congress and White House. Of course, the Trump administration also favors regulating the price of medicine, but much less so than Democrats do, and Republicans in the Senate are fairly strongly against it.

A Democratic healthcare reform would probably do much more here than a reelected Trump, putting much more downward pressure on the iShares Nasdaq Biotechnology ETF (NASDAQ: IBB) if Biden wins.

Meanwhile, both parties have recently shown they want to take anti-trust action against Big Tech. The Democratic majority in the House, however, is proposing much stronger measures than Republicans are.

A reelected Trump or a Republican Senate might go along with some fines, minor restrictions, and other slaps on the wrist, but not much more.

Democrats, on the other hand, are considering breaking up some of the Big Tech companies, banning them from acquiring start-ups, and other harsh measures.

In short, a strong Republican showing in November may keep this year's tech rally going for longer.

We'll continue to bring you all the latest updates and moves to make leading up to the election right here at Money Morning, so be sure to follow along.

And in the meantime, don't forgot to catch my colleague Tom Gentile making history in his latest presentation…

You see, at this moment, Tom Gentile is making history with the most powerful strategy of his career. Tom's so confident he can generate a 100% win rate for the next year, he's putting up a $3.5 million pledge to prove it.