I can't overstate it: The stock market craves certainty like a fish craves water. Traders, on the other hand, need uncertainty, well, like a fish needs water... at least if they want to be successful traders.

Right now, the most popular trade on Wall Street is, essentially, betting on uncertainty. And everyone with more than two nickels to rub together is hedging their positions.

I see why everyone jumped on the uncertainty bandwagon...

All this has led to a 20% spike this September in the volume of VIX futures. VIX futures are the weapon of choice for Wall Street heavy hitters when the markets are set to shake.

Now, this tells me that my Trading Commandment No. 2 most definitely applies: "Don't run with the crowd. Avoid the bandwagon unless you're driving."

What I mean is, we're well-hedged and prepared for what's coming. But for a crack at real profits, we don't want to pile in with the other 54 million traders out there selling volatility, all fixated on who's going to raise their right hand on Jan. 20, 2021. (And yeah, I know the implications of a "contested election" - I successfully traded my way through the last one in 2000.)

So instead of getting in late on the volatility trade - which will severely undercut your profits - we're going to make these low-risk but extremely profitable moves today...

Three "Best in Breed" Picks to Buy Now and Hang Onto

My first pick has got to be the iShares US Healthcare ETF (NYSEArca: IYH). Why? Follow me here as I work through a little "stock market logic."

As I said, the market craves certainty. Healthcare, as a sector, has been tossed around and jostled as uncertainty over who is going to administer insurance for the group grows.

MUST-HAVE STOCKS: We just updated our list of the best stocks to buy for short- and long-term profit potential. Get our top seven stock picks here for free.

But these facts - and they are facts, not opinions - are inescapable:

Certainty will return over the next year - regardless of who wins the election - and its return to certainty will result in outperformance by the group as we continue to get older and demand increases.

If there's one plank in each party's political platform that has been clear over the last four years, it's healthcare. The results of the election will start the movement toward certainty. The return of certainty will bring the healthcare sector back to its status as a market leader. Buy IYH before Nov. 3. 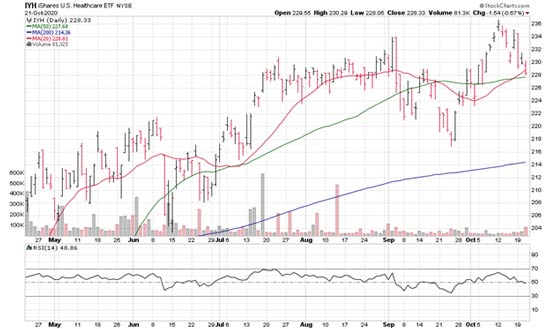 The iShares Global Green Energy ETF (NASDAQ: ICLN) is a no-brainer. Pundits and politicians can take ideological positions across the spectrum, but the almighty dollar wins in the end: We're not moving backwards on energy, regardless of who takes the oath in January. The economics of it won't countenance a move backwards.

EVEN BETTER THAN IYH: These three stocks are flying under the radar, but Shah thinks they've got massive tailwinds with "skyrocket" potential. Learn more...

Exxon Mobil Inc.'s (NYSE: XOM) recent exit from the Dow is just more writing on the wall. Coal, oil, and natural gas are going the way of the dinosaurs - poetic, given that they're actually made in part from actual dinosaurs. Hydrogen, solar, and other power sources will rise even if John D. Rockefeller were president.

Whether you drove your Tesla to live off the grid with a wind-powered computer, and a net-zero carbon footprint or you've got a coal mine, a fracking project, and an oil pipeline in your backyard, every investor has got to have capital in clean energy to maximize their returns - even if you don't understand its complexities.

It is the new technology sector of the market. That's not hyperbole - the ICLN has more than doubled the year-to-date returns of the Nasdaq 100. This ETF has gained 73% in 2020 while the S&P 500 has only tallied up a return of 6.5% for the same period. 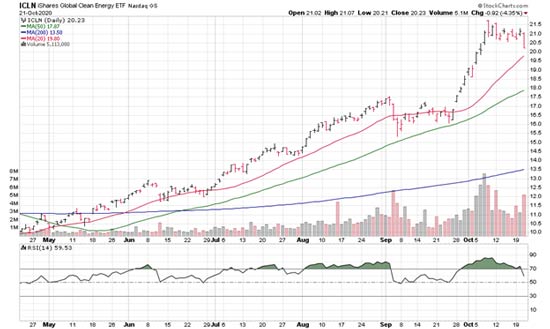 The iShares US Home Construction ETF (BATS: ITB) is another object lesson in Economics 101, and I'll tell you why. There are other housing ETFs out there, like the SPDR S&P Homebuilders ETF (NYSEArca: XHB), but there's a catch: XHB's basket of shares also includes some retail names like Home Depot Inc. (NYSE: HD) and Lowes Cos. Inc. (NYSE: LOW).

In fact, management's largest holding is Whirlpool Corp. (NYSE: WHR). Now, clearly, those companies are all ancillary to home construction; XHB's portfolio here is not totally out of left field. But I really want to get to the red-hot core of this sector's strength, and ITB is the way to do that.

Besides, we could see some slowdown in discretionary spending in 2021 - particularly if we don't get that stimulus - and that will translate directly to a slowdown in those retail names. So ITB will give us higher returns and less chop.

The economics of it are straightforward: The housing market is facing a shortage as millennials and other folks are taking advantage of lower interest rates and pursuing the American Dream. The ITB leverages that demand growth and puts gains in your pocket.

We've seen mortgage rates tick up a bit over the last month, but we're sure not going to see them spike. This means that demand will remain robust through 2021 and likely further. In addition, the U.S. Federal Reserve is going to keep rates low to stimulate the economy regardless of who wins the election. That's the Fed's job. 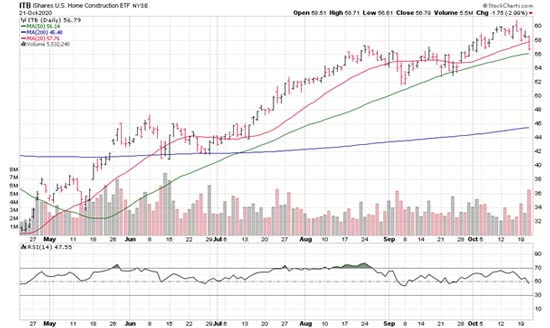 The bottom line is now isn't the time to be totally focused on trading and volatility; now is the time to look around for long-term growth prospects that look good for the remainder of 2020 and 2021. These three ETFs do that to a "T." There will be more trading to do - probably sooner than you might think.

And before you go, don't forget to check out our first-ever stock-picking "Lightning Round"...

Our Chief Investment Strategist, Shah Gilani, recently sat down with his team for a blazing fast, dirt-dishing session on some of the worst stocks on the market. If you own these, consider dumping them.

But don't worry - Shah's also going to be naming what he thinks are the best shares out there, including three "screaming buy" stocks, with company names, tickers, and his price targets.