Investors know how powerful trends can be. They can push entire sectors of the stock market to eye-watering heights. Look no further than work-from-home stocks this year. 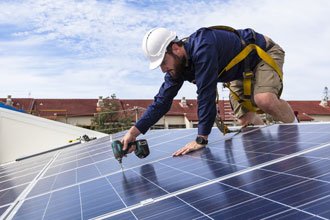 But trends can come and go. That's why I'm looking at a sector that's downright unstoppable. It doesn't matter who wins the election or how long the pandemic lasts; this sector is essential.

I'm talking about solar energy, the fastest-growing renewable energy source last year according to the Energy Department. Since 2016, we will have more than doubled the total installed capacity of solar power.

Investors have realized the future is in renewable energy sources and money has been pouring into solar stocks, electric vehicle stocks, and other renewable energy stocks. But there's still massive growth potential ahead. Right now, over 60% of electricity generation in the United States is from fossil fuels, which means there's plenty of growth left for solar.

Even with the current 30% tariff on solar panels set in place in 2018, which was originally seen as a major setback given much of the manufacturing is outside of the United States, solar has continued to grow. The current administration has moved forward and greenlit the largest solar project in the United States. The $1 billion Gemini solar project in Nevada will be a 690-megawatt powerplant and includes 380 megawatts of battery storage.

While we have seen several solar plants built in the last few years, Joe Biden has promised to spend $2 trillion on renewable energy. Within this plan, he wants to create a task force to push the install of 500 million solar panels to help reach his goal of 100% carbon-free electricity by 2035, a much quicker goal than the prior target of 2050.

Either way, we don't have to worry about who wins this election.

On top of that, the economics have also gotten better. Solar costs have fallen 82% since 2010, making it a much more affordable form of energy. During that same time period, global solar capacity rose from 40 gigawatts to 580 gigawatts, a 1,350% change.

And once you see this chart, you'll see how much potential there is ahead for the industry.

Just look at how much solar usage has gone up in the last decade, and this usage is not set to slow down anytime soon. 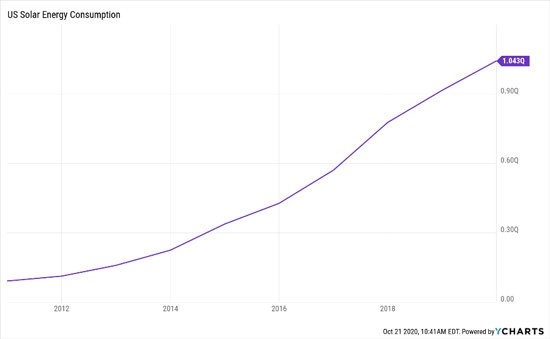 While this looks like we have added a lot of capacity, we still have a long way to go (with a lot of money to be made along the way). In 2019, solar energy provided only 2% of total U.S. electricity.

This is why I'm looking at the Invesco Solar ETF (NYSEARCA: TAN).

The market is so huge I don't want to miss out on any of it. In 2018, the global solar energy market was valued at $52 billion and by 2026 it will be a staggering $223.3 billion. With a 20.5% compound annual growth rate, that is an industry I want to be involved in. The fund holds companies like SolarEdge Technologies Inc. (NASDAQ: SEDG), which makes solar inverters, panel manufacturers like First Solar Inc. (NASDAQ: FSLR), and installers like Sunrun Inc. (NASDAQ: RUN).

Three Stocks Even Better Than TAN