With the Dow suddenly plunging 6% this week, investors are rightly wondering if we're on the verge of another stock market crash.

Unfortunately, there are some reasons this could be the case.

All at once, we're dealing with the most consequential presidential election of a lifetime, social unrest, geopolitical tension, and another wave of COVID-19 to burst a nice 40% rally from the last big drop.

We wrote in April about how stocks were on shaky ground despite a quick "V-shaped recovery." That has begun to show, as quick gains become more difficult to justify in the long term.

In the rebound, we saw instantaneous recovery as manufacturing plants went back online and people showed up to work again. But real, stable growth takes more time.

Markets are like reputations, taking a "lifetime to build" but lost in a minute.

This is what we saw early in the recovery when we mentioned how billionaire Leon Cooperman said the S&P 500 index could still drop as low as 2,200. That would be a 50% drop with current levels above 3,000.

Charles Dumas, chief economist at TS Lombard in London, had an even more dismal projection. He said it could fall as low as 2,000.

In either case, it is time to start considering what you will do if the market takes a turn for the worse again.

Here are the eight reasons we could see a second market crash this year, including what you can do to protect yourself…

8 Reasons Why the Next Stock Market Crash Is Coming

No. 1: Crazy Election Could Spark Volatility

We're staring down the barrel of possibly the wildest presidential election of the century.

Both sides have speculated that the other might not concede defeat upon a result.

Regardless of who the winner is, the expectation is a heated election, with a tense couple of months leading up to inauguration day.

As you know, markets hate uncertainty. The possibility of an uncertain outcome being litigated in courts and in the media could spook Wall Street.

No. 2: No Stimulus to Keep Economy Afloat

The White House and Congress have sparred for months over a second stimulus bill, to no avail.

House Speaker Nancy Pelosi has said that she and Treasury Secretary Steve Mnuchin are "miles apart" on a deal.

Protect and Grow Your Money in Any Market
With the right tools, you never have to worry about another big market drop. Get our complete guide and be ready for whatever comes next. It's free!
By submitting your email address you will receive a free subscription to Money Morning and occasional special offers from Money Map Press and our affiliates. You can unsubscribe at any time and we encourage you to read more about our privacy policy.
Thank you for subscribing! Check your email to access your free report.

Republicans and Democrats continue to point fingers on the matter, leading the public to anticipate a stimulus no earlier than February 2021. Now that the last stimulus bill has dried up, many small businesses and individuals struggling to pay rent could be left out of options.

We've been warned all year about a potential second wave of COVID-19 in the fall or winter. Both Dr. Anthony Fauci, Director of the National Institute of Allergy and Infectious Diseases, and the U.S. Centers for Disease Control (CDC) have said the same.

The United States recently saw a record 85,000 daily cases. This could bring back similar lockdown restrictions to what we had earlier in the year – the ones that led to about 30 million unemployed Americans.

The upside to this is that we have already been through lockdowns once. A second effort could be more resilient if local leaders have greater awareness of where to allocate resources.

Cities could be ready for more efficient, less sporadic, containment tactics should the virus strike again.

No. 4: The "Bull Trap" Has Been Realized

If you know anything about "stock market bubbles," you might have worried about the summer rally being a "bull trap" for investors. As we mentioned back in April, this would be right in line with Dr. Jean-Paul Rodriguez' chart on bubble markets.

A "bull trap" is a period of uncertainty following a long bull market – like the 11-year one we just had.

In theory, the market takes a dip as new fears enter the picture. It then rebounds with the hope of a return to normalcy, then it crashes even further into oblivion.

If this chart is correct, we are likely beyond the point of no return. 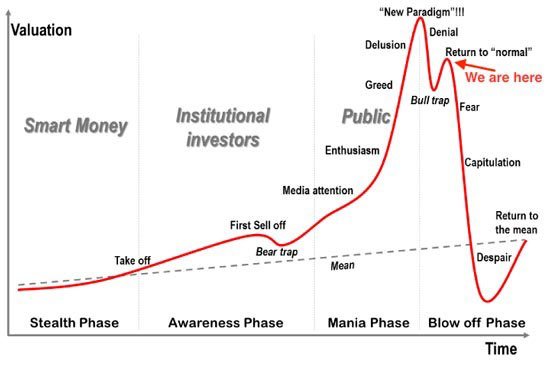 Just because the lockdowns ended doesn't mean it was suddenly "business as usual" for small business. Thousands of small businesses have shut down across America, even after lockdowns expired.

According to Opportunity Insights, San Francisco reported 49% of small businesses are closed due to COVID-19 as of September 2020. Sixty-five percent of those are hospitality and leisure. Nine other cities including Boston, Portland, and Washington, D.C., have over 50% of their hospitality industry shut down.

Back in April, we mentioned the U.S. Chamber of Commerce poll saying 43% of small busines couldn't survive without help from the government under pandemic conditions.

Since Congress has put off a stimulus deal until February, small business could be in for a rough few months.

No. 6: The Fed Is Still Limiting Stock Buybacks

The Federal Reserve recently extended the limit for current share repurchase programs for banks with over $100 billion in assets.

Those companies will now continue to be prevented from starting new share repurchase programs. The Fed plan also postpones dividend payments to their shareholders.

The central bank argues this is intended to maintain stable bank cash reserves.

Of course, large banks and their shareholders aren't too happy about it. Neither is the stock market.

Meanwhile, over 40 companies on the S&P 500 have voluntarily put off share buybacks with the same goal.

No. 7: Corporate Debt Is More of a Black Hole

U.S. companies are currently more than $10 trillion in debt. That's more than half of GDP from 2019. COVID-19 has been no help in this regard, choking the cash flow of businesses already struggling to balance their books.

The solution? The Federal Reserve came to the rescue in 2020, when it slashed interest rates to near zero. This led to increased borrowing, which led to more investing and a rise in demand for stock shares.

This is nothing close to a long-term strategy. In fact, it exacerbates the debt problem. A second wave of COVID-19 may chip into corporate debt again, further shuffling the balance sheets of companies struggling for more capital.

No. 8 Mortgage Delinquency Is Rising

The unemployment rate was an abysmal 7% for September. For context, it was 3.7% in 2019. Millions more could lose their jobs, which means millions more would be struggling to pay their mortgages in future months.

Different from the first COVID-19 wave, there is now no assurance of stimulus for at least another four months.

We anticipated a rise in mortgage defaults in the latter half of this year. Delinquency spiked in Q2 2020 to over 8% of all loans outstanding. Previously, that number had been around 4%.

If this continues, the markets will continue to spiral.

It's not certain that the market will crash. The bottom line is simply that this is no time to be careless with your money.

The uncertainty itself is the concern.

Here are some ways you can shield your portfolio from the unknowns.

How to Protect Your Money from a Market Crash

The least you can do to protect yourself from huge losses is put trailing stops on all the stocks you own.

This means simply choosing a minimum price at which you would be uncomfortable holding the stock any longer.

If the stock reaches that threshold, a sell order is triggered. Money Morning's generally recommended stop is about 25% for most stocks.

Another thing you can do is buy an inverse ETF. It's an exchange-traded fund that is meant to go the opposite direction of the market. Proshares UltraShort S&P 500 ETF (NYSE: SDS) is a solid one.

But before you do anything at all, make sure these stocks are nowhere near your portfolio.

Are you worried about the 3 big Banks reporting on January 15th?