On Wall Street, they live and die on information; fortunes are made and lost depending on the quality and timeliness of the intel. Traders - good ones - are some of the most clued-up people around.

So what happens when we're in a situation where there just isn't enough information yet? Because at this point, we really don't know who's going to win the election. We've got polls, predictions, pundits - all of it sorta-kinda pointing one way - but the hard truth is we really have no idea.

In fact, I'd argue that we're close to the maximum; the most uncertainty since COVID-19 began to spread here last winter.

The real smart money is going to where the certainty is...

The move that makes the most sense now is to look beyond the election, because there will be a time when we put this behind us, whether that's Wednesday, Friday, or five weeks from now.

TOXIC STOCK ALERT: 22 million shares of this popular company change hands every day... just make sure they're not your hands. Get the full (uncensored) story right here...

The trend and the following chart are telling me that Caterpillar Inc. (NYSE: CAT) makes an attractive investment right now.

This industrial giant is usually one of the companies to get the first call when there's a project to be done. Regardless of who is elected, we're going to see a lot of work starting on the country's infrastructure. There's simply no alternative.

Fundamentally, CAT shares continue to see a boost as global demand has balanced and countries around the world prepare to use universally cheap financing to get big jobs done.

Caterpillar shares are one of the relative strength standouts in the market as the stock has doubled the S&P 500's year-to-date performance and continues to press to new highs.

The stock also remains in a long-term bullish trend. Intermediate-term technicals tell the story of a stock that is likely to rally through the election volatility as CAT sets its sights for a target of $200. 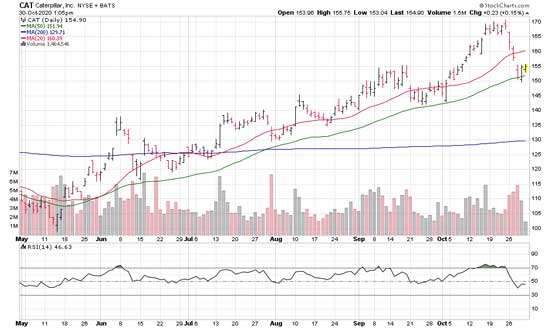 As recently as five years ago, these companies found themselves under tremendous pressure; you wouldn't have thought they'd lead anything, much less the energy sector, but there are unstoppable forces pushing them higher.

Increased efficiency in production and storage, and an inexorable move toward affordability and "grid parity" have blown off the chains that held these companies back. In some cases, "alternatives" are even cheaper than fossil fuels, to the point where it's barely economically viable to mine coal.

A "GENERATIONAL BUYING OPPORTUNITY": Shah's research shows some powerful headwinds building that could make these three stocks skyrocket. Learn which...

For all the hostile White House rhetoric around wind and solar, government programs that backed these companies haven't let up, and will continue under Biden or Trump, no matter what.

Companies like Sunpower will continue the growth story that they started long ago.

SPWR shares have been one of the relative strength leaders in the solar industry as well as a leader in the iShares Global Clean Energy ETF (NASDAQ: ICLN) I recently recommended. Analysts and investors continue to build positions in the stock, which is only helping to maintain a healthy bullish trend.

This is one sector and stock that will see an additional push higher under a sweep by the Democrats, but both will continue higher regardless of the results. Vote with your wallet on this one, folks. 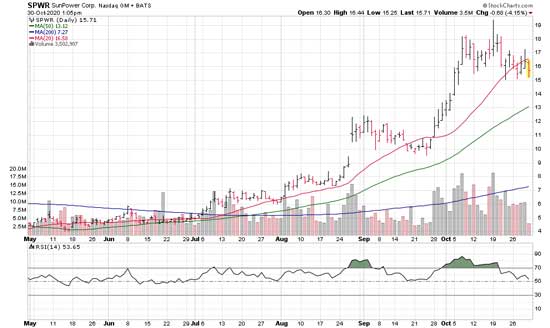 We don't have to go far to find my next recommendation - Plug Power Inc. (NASDAQ: PLUG) is another clean energy stock. This one was in the news earlier this summer as one of the more popular stocks of the "mobile app" investing boom, but in this case, people were buying for a good reason. It's not going anywhere but higher.

Plug Power is replacing batteries in vehicles and other equipment with hydrogen fuel cells - actual, next-level "alternative energy." This is one of the "New Tech" stocks that will one day dwarf names like Alphabet Inc. (NASDAQ: GOOGL) and Facebook Inc. (NASDAQ: FB)... at least until one of the old-line tech companies smartens up and outright buys Plug Power. That might sound glib, but it's not without the realm of possibility. That's just another reason to own this company. 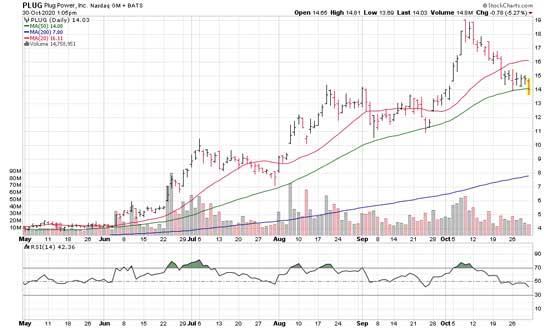 Someday, maybe even soon, a measure of certainty and sanity will return to the market at large. We'll see a trend emerge - even if that trend is down, there will still be plenty of opportunities. Soon it'll make sense to trade more actively, too - even trading volatility. But sit tight: That day isn't today.

And in the meantime, watch this presentation on the best and worst stocks in America...

You see, my colleague Shah Gilani is going to give you the straight truth about some terrible (but extremely popular companies) he believes you should consider selling right now.

But, even better, he's going to name three stocks - with tickers - that he thinks belong in every investor's portfolio. Watch now...