Talk about a double-dose of medicine: First we got the "Biden Bump," and then Pfizer delivered the "Vaccine Jump" with news that its coronavirus vaccine candidate was, incredibly, 90% effective at the time the data was collected.

Ultimately, it could be lower, but it could be higher, too – we don't know. But that's blown away some earlier predictions that we'd see one that's 50% or 70% effective.

No one's seriously saying the pandemic is over, but look: We've lost 1.26 million people all over the world. We've got 6.9% unemployment at home because the economy's been knocked for a loop, and just about all our lives have been severely disrupted – and this has all been going on for eight months.

Naturally, everyone's excited to see some sort of endgame out there. I know I am.

That showed in one of the strongest openings in market history on Monday, when the Dow opened up more than 1,500 points.

Now, if you've been holding Pfizer since shortly after the March lows, before news broke that Pfizer was working on a potential vaccine, you've probably made more than 30% on the stock.

Not bad – not quite as good as the market, but not bad.

Today, though, I'm going to show you how you could almost quadruple your money on this stock – and you can do it for less than the cost of a big steak dinner.

Not only that, but do this correctly (it's really easy), and you'll pocket that cash long before the first patient gets the shot…

Where the Vaccine Race Stands Now

The timeline for the Pfizer vaccine is still pretty up in the air, but the experts' best, educated guess is that it'll come before the U.S. Food and Drug Administration (FDA) for Emergency Use Authorization (EUA) in just a few weeks – and full approval will probably come in months, not weeks.

The government will probably see to it that frontline healthcare workers get first dibs, which will probably amount to just a couple of million doses, since that's all they'll be able to manufacture and distribute between now and then.

By 2021, production and distribution will likely ramp up fast, but not that fast. Last month, Dr. Fauci told a video conference audience that he thinks life could "begin to look more normal" for most of us by the third quarter of 2021, and that it'll be "into 2022" before we see restaurants operating at full capacity, big concerts, capacity crowds at football games, full theaters, and so on.

So it'll be a while before everyone has a chance to get it, by which time we might have even more vaccine candidates available.

I think those investors are probably going to see some nice gains come 2021, 2022, but folks with long-term equity anticipation securities (LEAPs) options will do better.

As for me? Well, I love LEAPs, but a long-term buy-and-hold here isn't quite my style. Hey – why risk or tie up that much money for that long?

I've got a much, much shorter time horizon in mind that'll put you in the middle of some extremely bullish Pfizer catalysts coming up virtually any day now.

In fact, I see this trade paying as much as 290% by the middle of December, provided the stock moves just a couple of points.

Perfect! Pfizer Is in a Great Position Right Now

So, a little of the Monday euphoria has worn off – or a lot of euphoria if you're in the tech sector. Most vaccine stocks went ballistic on Monday, but Tuesday, not so much.

This company rocketed 10 bucks a share on Monday. You see, NovaVax is just a little further behind the curve than some other frontrunners, but it has a promising candidate, and it's eyeing 2021. That promising vaccine candidate sure didn't stop it from falling out of bed yesterday, though. It lost more than 14% as of midday Tuesday.

Pfizer, on the other hand, the company which is, along with BioNTech, at the center of the buzz, gave up a little ground yesterday, but is pretty much holding its own.

Now, like I hinted at earlier, we need this stock to move up $5 a share by mid-December in order for this trade to really pay off big.

There are two things I think could send it up $5 – or much, much more – by that time. For one, the company has said it's "weeks" away from sending the phase 3 trial data up to the FDA for an EUA ruling. That's the first price catalyst.

The second is a little more out there, not quite as certain, but I think there's a very realistic chance.

Here's the thing. Buried "below the jump" in all the excitement was the note that Pfizer's vaccine might need to be kept at between -80 and -94 degrees below zero. Brrr!

That's a big logistical hurdle, to keep millions of doses that cold for that long, every step of the way, until just before they go into your arm. But also in the note, the researcher mentioned that they weren't 100% certain how important that level of "deep cold" was.

It could very well be able to keep at warmer temperatures – we just don't know – but I'm confident they'll have a conclusive answer before they file for the EUA. Anything that makes this vaccine easier to deal with will be like money in the bank. So that's the second potential big-move catalyst.

There Are Two Ways to Play This – Take Your Pick

How to profit? Well, Pfizer's still on the pricey side; I think anyone who bought it after 10 a.m. on Monday probably paid too much.

So if we don't want to shell out that kind of cash, that leaves us with call options. The stock is trading at around $39 right now, so, if we're bullish, we want to look at strikes in the $45 neighborhood. 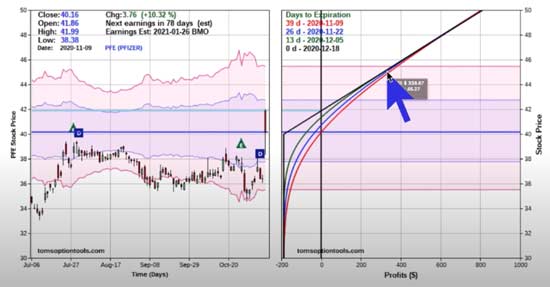 If the stock gets to $45 by Dec. 18, those calls should be worth around $5 each, which would be close to 290% in gains for putting $129 on the line. Even though that's not a huge amount of risk, this would be considered the "aggressive" way to play PFE.

If you want to be more conservative, you could do well with a call spread, where you buy a lower-strike call and sell one with a higher strike. In this case, you'd stand to gain a "mere" 148% or so, with even lower risk.

A triple-digit gain in a month is great, but the truth is, the profits could potentially be even faster.

See, I've just finished some research into a rare market phenomenon, something I'm calling "the Four-Day Profit Cycle." You've got to see it; it outperformed the S&P 500 by nearly 17% in the first eight months of 2020.

You read that right: It's possible to double a stake in under four days. Watch how…