By now, you're familiar with how the Biden Bump became the Vaccine Jump. But what you might not know is how weird my trading screen looked as the day's trading kicked off and went into high gear.

I could see the flurry of buying exactly as it was being reported in the media. No surprise there.

But on my monitor, something began to look way out of whack...

In a sea of green, one segment - one that's been insanely profitable in an insane year - was turning red.

They were all sinking in a normally profitable corner of my monitor.

The news that a vaccine was on the horizon - not approved, not here, not currently going into peoples' arms - was causing traders to dump the so-called "pandemic stocks" en masse.

No doubt some of the "pandemic stocks" will be marginalized when normality returns... but that's sure not happening this week.

THIS GUY LOST EVERYTHING and fled to Thailand. Two years later, he had $5 million to play with, all because of this one strategy. Watch...

Trading Commandment No. 2 definitely applies here - do not run with the crowd, because the crowd that's been selling ZM, AMZN, CLX, and the like since Monday is just leaving money on the table.

These knee-jerk, emotionally driven sell-offs are handing you a rare opportunity to buy some of the most bullish stocks in existence right now.

Short-sighted investors have just left these lying around - and all we have to do is pick 'em up...

We're heading into the cold weather months, and despite Monday's announcement, numbers are still on the rise, going parabolic, even: Just Tuesday, the United States added another 130,000 new cases to the COVID-19 tally.

Companies like Google, Amazon, Twitter, and Facebook have already told their employees that they can work from home until the summer of 2021. Do they know something we don't?

No one I know of is seriously saying the novel coronavirus pandemic is over; most experts agree we've got at least 10 or 12 tough months between now and "normal," as an effective vaccine is approved, manufactured, and distributed to a huge percentage of the 329 million people in the United States alone.

What this tells us is the pandemic stocks probably have at least double digits, if not more, left to gain before it's all said and done.

Not only that, but this pandemic has probably permanently changed at least some aspects of modern life. I can easily imagine by 2022, folks attending rock festivals with 60,000 fans and still getting groceries delivered.

It's not everyone's cup of tea, but some companies and their employees are finding that it's safe, enjoyable, and cost-effective to work remotely. Even once we're all vaccinated, managers might decide they really like the reduced overhead; some (but not all) offices could go virtual on a more or less permanent basis.

THE "MILLENNIAL MILLIONAIRE" didn't start out that way. In fact, he once moved back in with his folks. But this one strategy made a huge difference for him. Learn more...

Here are some of the stocks I'm eyeing up right now...

I issued my first trade recommendation on Zoom in March to my Fast Profits followers. That trade hit returns of more than 1,400% at its peak.

Since then, the stock has returned almost 300%, and "Zoom" has become a verb meaning "to meet with someone via videoconference." Just like you can "Google" stock prices or baseball scores, you can "Zoom" co-workers. 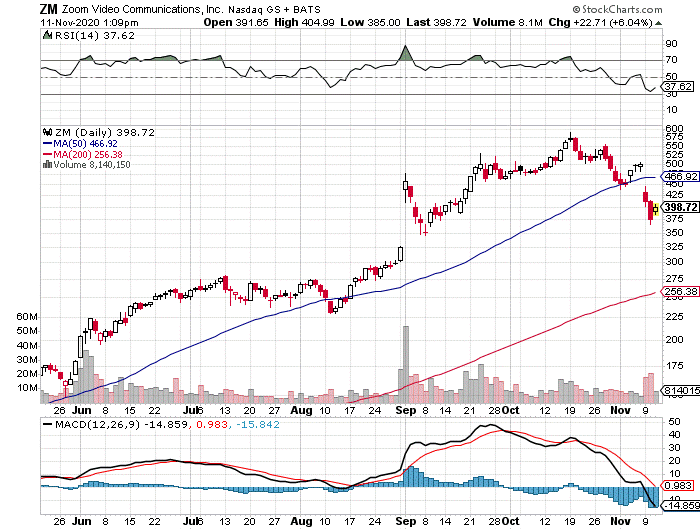 Having your company name become a verb or genericized trademark, like Coke or Xerox, is almost always a recipe for long-term success. And I know what you're thinking, but Polaroid had a hell of a run in the 1980s.

What this means is, vaccine or no, Zoom isn't going anywhere. The company is already starting to pressure old-line tech companies like Cisco Systems Inc. (NASDAQ: CSCO) and Microsoft Corp. (NASDAQ: MSFT) - remarkable for a company few people even knew about just 330 days ago.

AN HOUR BEFORE BREAKFAST - just 90 minutes a week - could be all you need for a shot at thousands per week. Click here...

If you agree with me that the work-from-home trend is here to stay, even at lower levels in the future, then you'll see Zoom's 30% decline in 18 trading sessions as an opportunity, too. This company is the real deal - a great investment.

Jump on the Stock... and the Bike

I've got to be honest. At first, I was skeptical of Peloton. In fact, I flat-out didn't like it. It seemed expensive and annoying... until I actually used one. Then it clicked.

The ability to change the riding experience and take on "challenges" is what makes Peloton a different breed - the "Best in Breed." That's why everyone from novice bikers to pros to people who just want to avoid packing on lockdown pounds have enthusiastically embraced these "smart" exercise bikes. 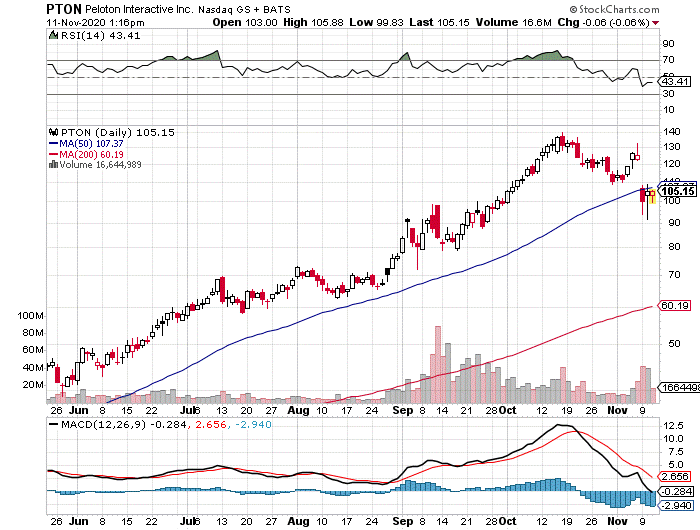 Granted, it's not the only exercise bike out there, but it's become a cult phenomenon gone mainstream; it's a pandemic staple for many.

Peloton just announced earnings, and the results were good except for one thing: the company's outlook. The outlook was fuzzy, and probably with good reason. Management knew we'd eventually get a vaccine, and they wanted to play it safe. Nevertheless, like I said, "this thing isn't going away anytime soon."

So, Peloton doesn't have the long-term outlook Zoom does, and come summer 2021, you could start seeing these machines at garage sales, but that's okay. Winter is coming, and they will see demand firm up.

Buy the shares at market with a price target of $130-$140. This stock is a great "eighth inning" (or maybe "seventh") pandemic trade.

Rounding out my list is Etsy. I recommended it to my Fast Profits followers and told them to buy shares and an option on ETSY even before Zoom back in March!

It was a solid call. Etsy shares are up 164% since I made that recommendation, but now there are two reasons you should consider this stock as a staple. 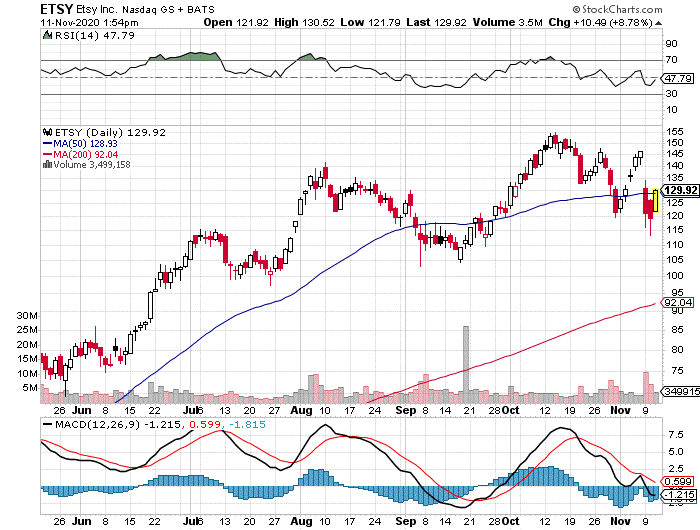 Not to belabor the point, but this thing isn't going away anytime soon.

And the "official" holiday shopping season starts in just two weeks, though going by amount of commercials and deals I'm seeing, it's already started. I just saw my first Etsy commercial during Sunday's Steelers game - talk about an impression that worked.

It kind of bums me out to say this, but this shopping season will be different - it absolutely has to be. No Black Friday crowds (though probably no flat screen TV riots, either; not necessarily a bad thing), no elevator-music carols or bright displays in crowded malls. No taking the kids to see Santa. Most families won't have big get-togethers with out-of-state relatives, either, I'd bet.

Those traditional pleasures and hassles will be back - no doubt - but, again, not this year. And an online retailer like Etsy, which has a knack for coming up with those meaningful, personal gifts everyone is going to want this year, is the company for these times.

Etsy has been growing revenue at an average of more than 30% since 2016 and at an average exceeding 130% the last two quarters. That number is going to stay high for the next quarter - we'll get those reports in February - as a result of strong holiday sales.

The stock had a bigger day than most yesterday, but I don't think emotional investors are jumping back in yet; there's a lot of upside left here, because the strongest support is actually at $110. Shares are 10% lower than their pre-earnings prices as they bounce between $120 and $130. This is definitely a pandemic and holiday trade, but I'm interested to see where this stock goes in the long run. It could very well have "legs."

Like pretty much every other human being on Earth, I want this pandemic to be over. I really, really do. And the news of an effective vaccine is definitely a light at the end of the tunnel, but as I've said three times now, this thing isn't going away anytime soon. There's still a tunnel left to go through. Use some of the profits you make on these picks to do something nice for yourself now - or when life gets back to normal.

And before you go, you could "recession-proof" your portfolio with this...

You see, lots of investors watched their hard-earned money evaporate during the 2008 recession, but Andrew Keene collected thousands by developing the ultimate indicator.

He used it to identify the moves all the big players were quietly making, putting him in the know weeks before others caught on.

Today, he's revealing it all, so you too can turn any market condition into profits...