The DoorDash IPO is finally here, and investors are lining up to get a piece of the world's biggest third-party food delivery company as soon as they can. But don't buy on the IPO date - there's an even better time to buy DoorDash stock down the road. 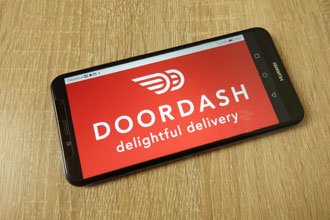 We'll show you exactly when that is. All you have to do is look for one number...

IPO prices are widely known to be inflated by hype. And DoorDash is by no means short of it. DoorDash initially expected to price between $75 and $85 per share. More recently, It targeted the $90 to $95 range, hoping to raise $3.1 billion from the shares.

The company ended up selling IPO shares for $102, pricing well above that range.

"Hype" isn't necessarily baseless. DoorDash was most recently valued at $32 billion, double what it was only in June and five times its rival, GrubHub Inc. (NYSE: GRUB). It's an incredibly promising company.

However, don't be so quick to pull out your wallet. A momentary rise is fairly common with IPOs. You could find one that takes off from the IPO date and never looks back. Others will get some post-IPO correction (if not a crash).

But there's reason to expect a cheaper DoorDash over the next year. That's when you'll know to buy.

Yes, DoorDash had a hell of a 2020. COVID-19 boosted food deliveries to unforeseen levels as the company saw over 200% year-over-year increase in orders.

But what will happen when COVID-19 is gone and people start hitting restaurants again? That's only one of a few things putting pressure on the DoorDash stock price.

Here's how 2021 could pan out for gig companies - and when to buy DoorDash.

Can the DoorDash IPO Deliver?

Compared to other gig-economy tech startups, DoorDash is a gem.

We like to mention Uber Technologies Inc. (NASDAQ: UBER) and Lyft Inc. (NASDAQ: LYFT) a lot in this context. Similar to food delivery, the ride-hailing companies are bitter rivals in a novel market that is still in the process of consolidating.

A price war between the companies has sunk the revenue of each. And only one of those stocks made it out alive - Lyft is down more than 40% since its IPO in Spring 2019.

Wall Street insider reveals the five obscure stocks that could dominate 2021 in this free video.

On top of that, gig companies have faced heavy legal scrutiny in states like California and New York. Their employees (DoorDash calls them "dashers") are independent contractors with no benefits or workers' comp.

In 2019, a new law was proposed in California that would require employers to treat independent contractors like regular employees. This, again, would cut into revenue for these companies.

The law did not pass in 2020, but that doesn't mean gig companies are out from under the gun.

DoorDash also got in trouble in 2019 for counting customer tips toward the "guaranteed minimum" payment DoorDash promised its drivers. After some bad press, the company has ceased to do this, but they have openly stated that this could "result in an increase to the fees we charge customers," which could affect their customer retention.

The impact of this is yet to be seen in financial reports. Likewise, issues between startups and their contractors remain a threat, though they've faded into the backdrop for now.

So DoorDash is a successful company thus far, with potential storm clouds brewing in the distance. How do you manage this balancing act?

Here's what you could consider...

When to Buy DoorDash Stock

Additionally, the gig economy remains uncertain if legislators remain hawkish as they have been.

In the nearer term, margins are poised to decrease as the company re-enters competition with dine-in restaurants.

The good news for DoorDash is that it is top dog in the gig market. The company bought Caviar in 2019, boosting its reach in various cities.

The niche is also nearly consolidated, so DoorDash's role in the market is more clearly defined over time. Postmates was one of the few small competitors remaining, and that was scooped up by Uber.

Remember, we saw Lyft suffer big time in direct competition with Uber, while Uber continues to deepen its losses with new acquisitions and marketing expenses.

But judging by previous numbers, DoorDash could still be the favorite here - more the "Uber" than the "Lyft" of food delivery. The company's revenue spiked 204% year-over-year for 2019 (note: before COVID). Orders were up over 200% for that year as well.

Uber, which is more sprawled across different markets, may have a tougher time proving itself.

Still, DoorDash is not profitable yet. And the financial inconsistency we mentioned has been revealed the most by its margins right now.

Now, here's the kicker. With vaccines underway and uncertainty looming in the gig market, we're expecting that loss margin to widen again in the near future. And that would mean there is a much better time to buy DoorDash stock than after IPO.

CNBC's Dan Cramer will tell you to buy DoorDash as long as it's under $100. But you could likely get it under $90 if you wait a while.

In fact, I'd say wait for it to cross the $85 threshold over the summer months. Though investor interest has raised the IPO price above $100, market factors and summer dining could bite into revenue.

Add in the "hype" factor you see today, and you get your magic number: $85. If DoorDash gets there, that's how you get the most bang for your buck.

You need to always keep in your mind that companies like DoorDash are planting their feet in uncharted waters. Gig stocks have to be looked at a little differently, and any silver lining has to be taken with a grain of salt.

This is a great way to look at IPOs in general, as underwriters are incentivized to build excitement around the stock, often resulting in an inflated perception.

You always want to look for hard numbers before a buying decision.

So, expect a minor slump after the IPO excitement.

That said, DoorDash is still one of the most glowing gig stocks we've seen.

Compared to other tech IPOs this year, the financials look solid. The stock is a great value, trading at up to 15 times the year's sales.

It's also leaps and bounds ahead of competitors. Get it cheap if you can!